FC Barcelona has become the world’s top club and has set the standard for all other clubs to follow.  With more than a dozen major championships and counting over the past four years, the team has achieved remarkable success in La Liga, the Copa del Rey, the Champions League and also the FIFA World Club Championships.  Further, the bulk of the 2010 World Cup Champion Spanish National Team mainstays call Barcelona their home club.

What has prompted this run?  Certainly talented players including the likes of Lionel Messi, Xavi Hernandez, Andres Iniesta, Gerard Pique and others are critical to the team’s stunning run.  However, the Barcelona model is much more complex, as the coaching, philosophy, tactics, team culture and more all contribute to the spectacular results and consistency that have been the hallmark of the club in recent years.

A new book that we've just released call, FC Barcelona: Style and Domination, A Tactical Analysis of FC Barcelona examines the special qualities and practices that have been critical to the club’s recent success.  From a profile of the manager and summary of the club’s overall culture to in-depth analysis of the team’s players, systemic philosophy, tactical priorities and playing tendencies, this book puts the reader in a position to understand how and why FC Barcelona has become the world’s top club.

The book also features diagrams and summaries of highlights from La Liga, the Copa del Rey and the Champions League, including goals, near misses, set-pieces and more.   As part of the tactical analysis, the book also takes a look at the potential  weaknesses in the current FC Barcelona system.   Finally, and critically, the book includes common practices of the first team and dozens of further training exercises that can help coaches train their teams to emulate the ‘Barcelona Way.’ I found 'FC Barcelona - Style and Domination' full of very interesting and useful information to take back to my teams.

Here is a training session that I put together from exercises and games in this book. 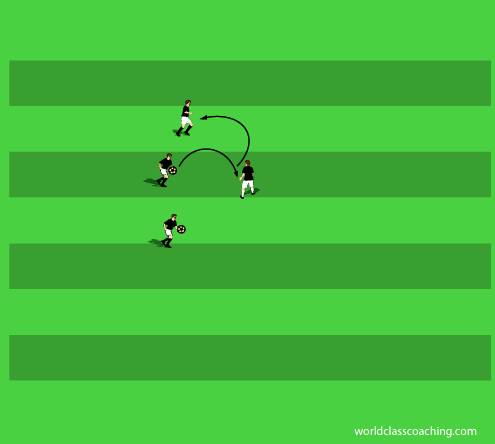 Three serving one with two balls    10x10 yard areas    Three servers (two with balls) passing balls in turn to the working player, who plays first time each successive service to the player without a ball (rotates with each serve).  This environment compels the receiving player to redirect the ball in the flow of the exercise and with technical speed. 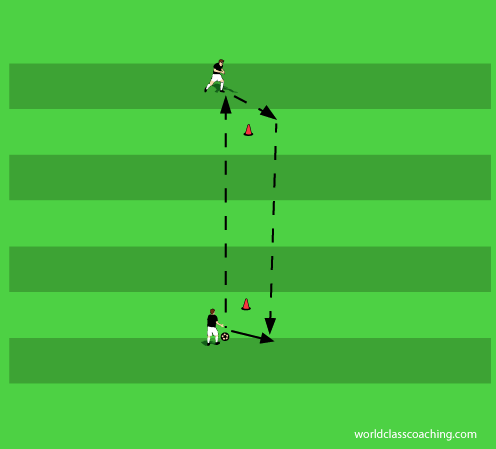 Pairs two-touch passing        10X5 yard area        Players work in pairs with two soccer balls.  The players work to pass and receive the two balls at the same time.  Both players pass with their right foot and receive with their left foot.  The change of feet and the common passing lane compel the players to work very hard to sharply change the angle on the ball with their first touch, a mandatory consideration in tight space and to prepare the ball to be released in two touches. 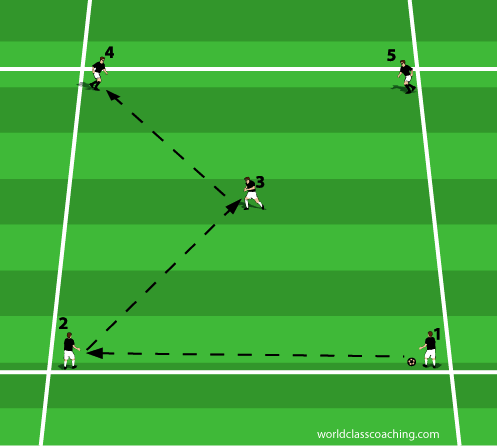 5’s speed passing    12x20 yard grid        Begin with groups of 5 with one soccer ball in each grid.  One player stands at each corner and the ball starts in one corner.  This is a pattern passing exercise that also requires sharp movement.  Player 1 passes square to player 2.  Meanwhile, player 3 checks away and then toward player 2, who plays the ball into her feet.  Player 3 turns and plays into either player (4 or 5) on the far end of the grid and then immediately takes player 1 or player 2’s spot, with that player showing to the middle.  While the change is taking place, 4 has played square to 5 and the sequence repeats in the other direction. 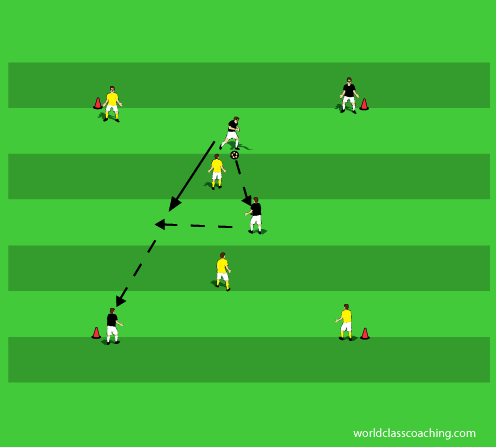 2v2+4                    12x12 yard grids    This is a dynamic possession game that includes opportunities for players to sharpen speed of play, combination play, vision, fitness and more.  Play 2v2+4, with each team having a pair of diagonally-placed corner targets to play to.

Players who pass into a target take that player’s spot, while the target quickly dribbles into the grid and works with the remaining teammate to try to get the ball to the other target.   This is an outstanding environment for training on 1-2 combinations, as the numbers, speed and space all force players to step, think and play quickly.

We finished with a scrimmage where I asked the players to incorporate the quick passing and support play that we'd just worked on during the session.