Don't Forget the Goalkeeper In Training

Incorporating the keeper into team training is vital to do but so often neglected.  Those teams “fortunate” enough to have a designated keeper coach tend to have the keepers go with this coach for part, if not all, of the team training.  The reason for doing this is because the skills, techniques and tactics in goalkeeping are so different than the rest of the team.

The problem with sending the keepers “off to train” is if they aren’t incorporated into the teams tactics, major problems will occur in games.

As an example, if a team is going to occasionally push up into an offside trap, if the keeper isn’t aware of his positioning, great goal scoring opportunities might be created AGAINST you.

In the diagram below the black team is establishing a line around 25 yards out from goal.

If the backs all decide to step up, in order to condense the field or to push the opponents into an offside position, the keeper must step with them.

If the team has worked on stepping up defensively while the keepers were off doing their own training, the entire team training gets defeated because of this lack of understanding.

There are many other examples where the keepers MUST be incorporated into as much of the team training as possible.  This is the reason many teams will do their keeper training prior to the team training so the keeper can then participate in the entire team session.  Another way to do this is to have the keepers their individual training while the team is doing their skill work in the beginning of training sessions.

To learn more about how the keeper should react to this type of offside trap, check out the book Offside! 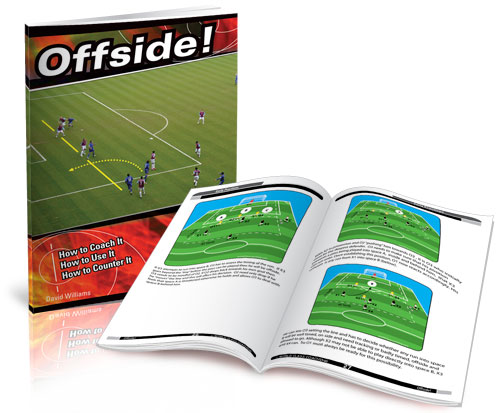