This session is great before your first seasonal contest, to keep sharp or to prepare for tournament play.

Set Up
Groups of 3 to 4 players take up positions at the corners of the penalty box. The players on the end line alternate diagonal services to the players at the top of the box and then rotate around the box counter clockwise ( to their right ). In this progression, the first parts of the drill are a keeper warm up. Instead of simply shooting, the progression should be as follows. ( If there are multiple keepers they should rotate in every 5 or 6 shots )

Pass the ball back to the keeper on the ground with pace. This is a keeper warm up so it should be within easy playing distance. This is a great time for field players to practice putting a good roll on the ball.

After 3-5 minutes, send the ball in between knee and waist height.

After 3-5 more minutes, send the balls in between the waist and head level.

The final progressions are high balls, then 5 minutes of free shooting. 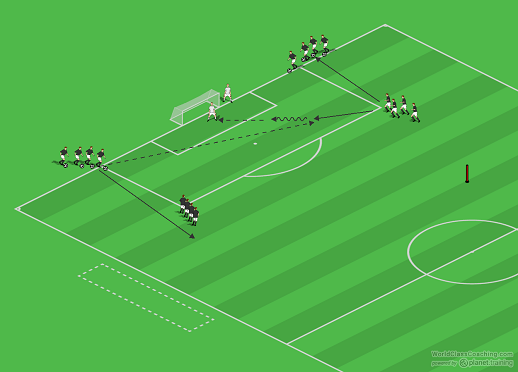 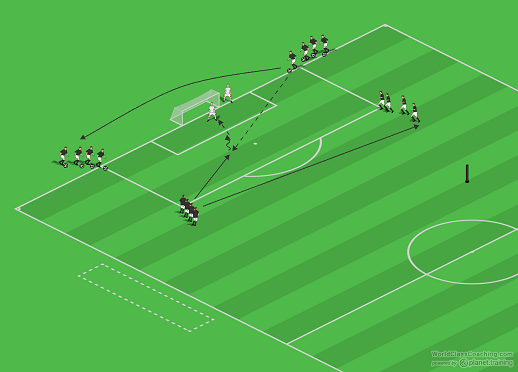 Coaching Points
The tenants of the warm up also help with passing, serving and shooting accuracy so the coach should monitor the players and keep them focused on hitting quality, accurate shots.

Set Up
Get in groups of 3. One group will be serving players, at least one group will be defending players and the rest will be attackers. At the heart of a good corner kick attempt are a good service dropping in centrally or on the back post, a player on the near post shielding the keeper, a target player central or on the back side, and a player at the top of the box or at the pk spot ready to crash and clean up. Also, the serving player should jump back in to avoid being off sides and be ready to serve back in any balls which are poorly cleared. Defensively , players on the near and far posts as well as one player trying to disrupt the main target are a must. 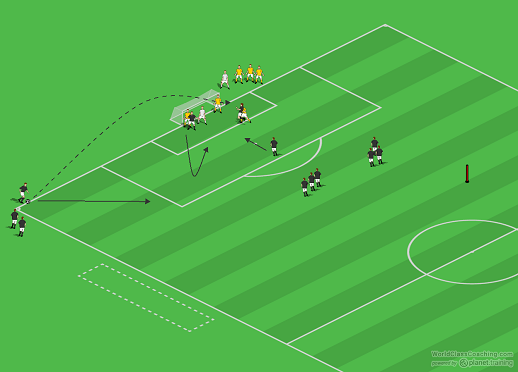 Coaching Points
The coach should encourage quality in all the basic aspects listed above. Also, the coach should place a post just outside the defensive third, on the opposite side of the field as a target for any clearances.

Set Up
The fundamentals of the basic free kick from 25 to 35 yds in are basically the same as the corner kick. Good service to a target across the goal. Good run to cover the near post and distract the keeper and a player getting open centrally at the top of the box for clean ups. Defensively , at least a 3 man wall where the keeper wants it and good marking on the attackers. 6 defenders,( 3 for the wall ) should take on groups of 3 attackers from a service made from between 25 and 35 yds out. 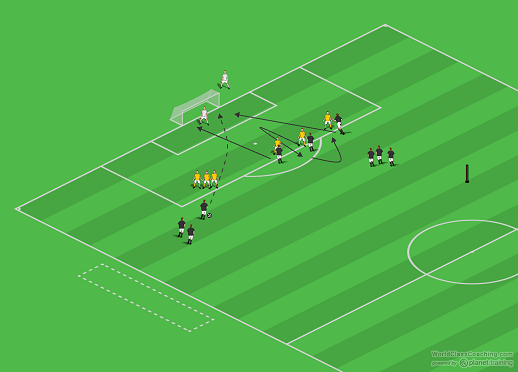 Coaching Points
The coach should make sure the services have a chance of being finished. My pet peeve is the “ field goal” attempt. A good shot that just misses, it happens, but as a rule, this is a service into a dangerous area more than a shot ( unless you have one of those talented ball strikers who can consistently score these). Also, the player at the top of the box should feign running in but them drop back and see what develops around the pk spot and top of the box. A lot of clean up goals are missed because too many players crash in. Finally, the coach should make sure the defenders are in a position to mark, but not attack their own goal. The defenders should have good position where they can come forward to attack the ball and get it clear( the coach should leave the target stick at the top of the defensive third ).

One Final Item
End this session with each player, including the keepers, taking at least 3 pks. It helps the keepers, it helps the players and it helps the coaches know who to go with in case the game comes down to a pk during play or a shoot out after full time.