How many times do you hear coaches yelling, "Spread out, create space!" And how often do you see the players look around and not move much?

A new book called, 'Coaching Team Shape in the 3-3-1' by Sean Pearson contains a great method to teach your players how to space themselves on the field. 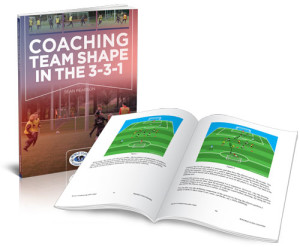 Teaching shape is best done first in small-sided environments only adding the complexity of additional players once everyone understands the concepts. So whether you are coaching a team that is playing 8 v 8 - 9 v 9 or you're team is playing 11 v 11, the methods and principles in,  'Coaching Team Shape in the 3-3-1' will teach your team how to play together better.

Here is an excerpt from the book that discusses the idea of creating diamonds and triangles.

Shape When in Possession

The next progression we move on to is to create angles of support from movement off the ball. It is important that these movements are rehearsed without pressure so players can become used to the patterns of movement.

Your team should now be able to move around the grids effectively and symmetrically keeping their shape, giving the team balance. You should not see substantial gaps between the defense and midfield or midfield and attack. At the moment your players are moving in straight lines, this does not offer any angles of support. What we’ll do now is introduce how and when specific players should move into positions to create better angles of support. These angles are more suitable positions for players to receive the ball. This introduces the third fundamental principle, movement off the ball.

After each phase use opposition pressure to help the team adapt to the new movements. Start with passive and move on to active pressure. 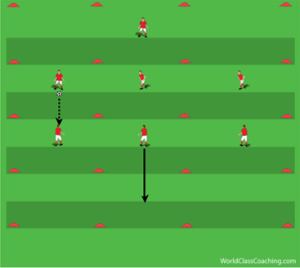 When the left full back (LFB) has the ball in the middle of their grid the center back (CB) moves backwards, watching the ball, to the back of their grid. Therefore, creating a triangle and giving a better angle of support.

This gives the LFB options to pass the ball. When the CB receives the ball both full backs (FBs) should move wider, spreading out and giving them more space. 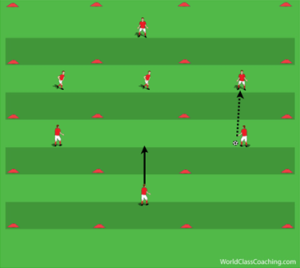 If any defensive player passes forwards, the CB moves forwards to be level with the left and right back.

There are more ways to create triangles and diamonds with other players which we will address later. 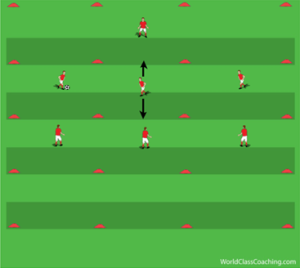 The CM must be aware of where opposition players are and should therefore move into space away from the opposition, depending on where they are. When pressure is added this will be key to keep possession. 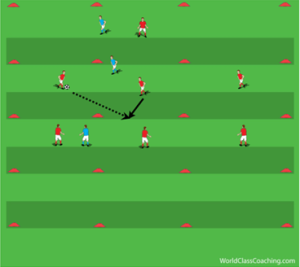 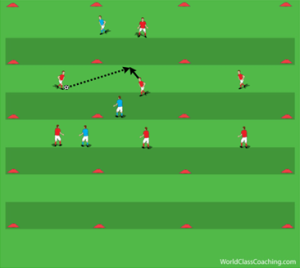 When the CM receives the ball they must aim to do so with the back foot, this is so they can pass to either side of the field. 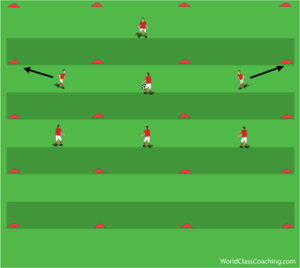 When the midfield has the ball they must spread out. This is to use optimal space and spread the opposition out, creating more space for themselves. So when your CM has the ball your WMs need to be as wide as possible and see which way the CM is facing. If the CM receives the ball and is looking forward the wide midfielders need to get further forward.

Here you are looking for your player’s understanding as to why they are spreading the field. They should understand that they are doing this to maximize the field, creating space for your team to play in, stretching the opposition so they can play between gaps that occur within their defense.

This is just a small part of this chapter that covers shape when in possession. The rest of the chapter covers the movements of the striker and how all of the players link together and combine to break down the defense and attack space.

What do you think of using a grid system to teach spacing and support? Have you had success using this or another method? Share your thoughts in the comments section below.