Jose Mourinho teams have been strong defensively since he took over in his 1st role at Benfica, through from Lieira, Porto, Chelsea, Inter Milan, Real Madrid and again to Chelsea. The backbone of his success has been from a very effective style of play based on not conceding goals, being compact vertically and horizontally, with the 2 centre backs being able to play close together and in front of the goal. In this Chelsea team, although they are the best team in the Premier League and one of the best sides in the Champions League, the lack of pace in the centre of the team is a concern, particularly when Cesc and Oscar and caught high as they are not quick enough to get back and help Matic once the press is beaten.

Another weakness is when Cahill or Terry are drawn wide in possession or to defend 1v1 on the side, Nemanja Matic will cover between the centre backs or in the half space, often leaving a hole in front of the defence due to Cesc or Oscar being too far away to cover the space in front of the back 4.

Against Tottenham, Mauricio Pocchetino had a clear game plan – tempt Chelsea into allowing Terry or Cahill wide in possession then win the ball form high pressing traps in the 4-2-3-1, then attack diagonally towards the far side centre back, with the near side centre back not quick enough to delay the attack. If Matic was to cover the space, this would leave the space in front of the defence exposed and allow for cutbacks is Cesc wasn't close enough to cover the space Matic leaves.

Tottenham game process;
Allow CB wide possession, tempt FB forward to press, release winger down the side and look for the cutback with Matic between Cahill and Terry

If possible, the winger will look for the cutback as Matic fills in between the centre backs as Cahill is in the wide zone.

Looking for the cutback as the space Matic covers is open

As the winger reaches the edge of the box, the cutback is on as Kane plays outside the box and looks to attack the goal directly. In some cases, Eriksen, Chadli or Townsend would find space in this zone with Cahill or Terry in the wide zone covering the full back, drawing Matic between centre-backs.

As Terry is very wide in possession, he will struggle to get into a central position is Spurs attack quickly. Here, the trap is made with the pass into Azpi who will have only 1 touch to pass the ball, with the inside option closed off.

Azpi is forced to pass the ball down the line where Townsend and Walker are 2v1 in the wide zone. From here, Spurs will attack between the massive gap between Cahill (out of picture) and Terry.

As Eriksen breaks forward quickly, Terry is unable to delay the attack, as Ivanovic is late in recovering. Matic can’t make a foul to break up the play and Eriksen is against the back line.

As Chadli breaks through, Eriksen releases a pass behind the defence, which hits the post.

Rose in the corner of the picture races forward from left back to score the rebound.

Cahill caught in wide zone is exposed in transition

As Spurs win possession, Ivanovic tries to counter-press but is caught out with a fast pass into Kane who is covered by Cahill. The wide pass releases Townsend down the line as Matic needs to cover between Cahill and Terry.

Matic covers the space between Cahill and Terry as Cahill doesn’t engage in 1v1 play against Townsend, giving up space as Townsend moves forward unopposed. As Matic has dropped in, the space between the lines is covered as Cesc is nowhere close to the ball.

Kane scores from a cutback 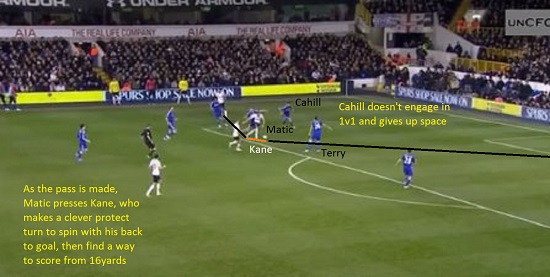 Kane scores from a cutback after a clever protect turn to evade the pressure from Matic, with Cesc and Ivanovic a long way away from being able to help defensively.

Identical build up leads to another cutback

From an identical build up, Cahill again doesn’t engage in a 1v1 on the side and instead conceded ground as Terry is marking the lone attacker in the centre with Azpi and Matic recovering.

Chadli scores from a cutback

As Cahill doesn't get close to forcing Townsend into making a decision, Matic gets close to make a 2v1, giving up space in the zone he should be covering, allowing the cutback to Chadli, who takes a touch into space before scoring from the same space and build up as the previous Kane goal.

Overall, Pocchetino’s tactics and game process to identify how to find a space to get shots away from, but using Cahill and Terry’s weaknesses and the movements Matic makes to cover defensively worked perfectly, resulting directly in 2 goals and leading to several other attacks on the day.