The following practice is focused on improving explosive power – a conditioning component required to produce high intensity actions during a football match. Improving explosive power means that the body will be able to take a larger amount of ATP (energy) into muscles. This will in turn help in producing as explosive action as possible. From a technical point of view, the practice challenges players to find a way of turning and scoring in a 1v1 scenario with a defender coming from behind. Player will therefore need to scan, use disguise when turning and choose appropriate finishing technique for a given situation. Competitive nature of the practice ensures that players are engaged and play with the highest intensity possible.

Organise a goal and two cones one the sides of it. Designate an area of approximately 20 yards in length from the goal. Divide the team into two groups. Organise a goalkeeper in goal. Prepare a sufficient amount of balls to ensure flow and intensity of the practice. Goal sizes can be adapted to suit team needs.

The practice starts from a goalkeeper who passes the ball forwards. At the same time, first player from each group makes a sprint and tries to get to the ball first. The quality of pass should allow one of the players to get to it before the ball leaves the area. 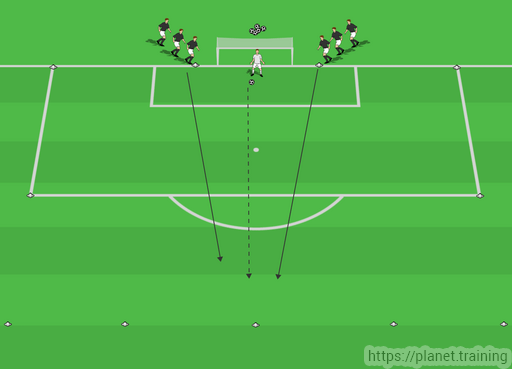 First player to the ball becomes attacker with an aim to turn and try to score in goal. The turn should be made as soon as possible, however, if needed disguise and tricks should be used to get away from defender.

If the opposition player manages to win the ball, his aim is to score in the same goal. The whole sequence (from pass being played out) should not last longer than 6-8 seconds. 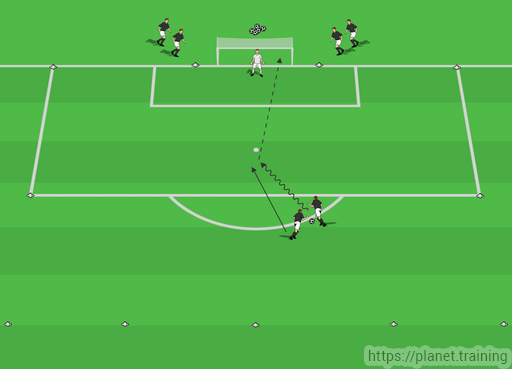 Every player should make 4-6 repetitions in 1-2 series. The rest period between repetitions should be 1 minute and between series – 4 minutes.