This session will focus on shooting, passing, and team dynamics on both offense and defense.  The focus needs to be on proper weight and direction of the pass and the quality of the finish.  The focus is also on moving without the ball and maintaining possession while looking for a finish.  This should be done as close to game speed as possible. 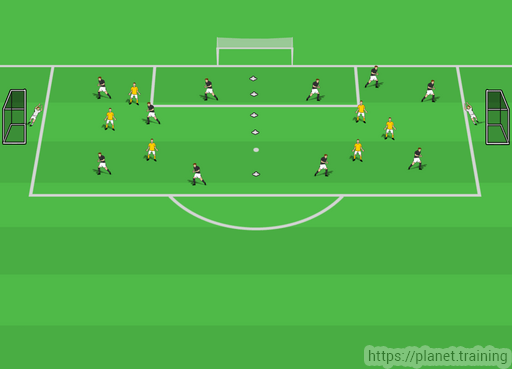 There are 2 grids by dividing the penalty area into 2 grids with a row of cones.  There are goals positioned just off the lines so the keepers have room to play without being in the grids.   5 attacking players along with 3 defensive players are in each grid. The exercise begins with the keeper on each grid playing a ball to the attacking team.

The next progression is for the 5c3 to continue play as before except now after a set number of completed passes (3,5,7  passes) the attacking team has a finish on goal.   The keeper once they make the save they play the ball to the defending players to hold possession.  Again this is a timed exercise so there is a sense of urgency for the attacking players to win the ball back and finish goals.  The total number of goals is compared to the other group and the losing team has pushups or sprints.

Team Finishing Inside the Penalty Area