When conditioning for soccer players, the key to progressive development on the field is to keep challenging their skill, their speed, their strength, and their stamina.  If you let up in any of these areas, development in that area will be stunted.  Sometimes we don’t realize how a lack of development in one area might affect the development of another.  For instance, without the quick foot drills of speed ladders and agility drills, the athlete might not have the base quickness to perform the skilled moves that you are teaching.  A lack of skill training (moves) could result in the inability to separate from a defender.

But more importantly, the two components actually work together.  We have combined the two components to bridge the gap between agility and soccer skill. Conditioning for soccer drills like this are essential building blocks that connect training and performance. 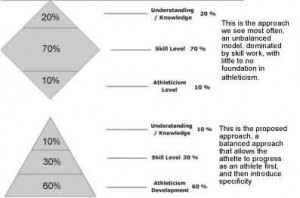 Our BALL AGILITY program originated, not as a stand alone program, but as a bridge from the quick foot ladder and agility drills to the skill and touch that they need in the game.  We have taken several basic moves with a ball and combined them with some quick foot movements.  Or you might say we have taken soccer skill and combined it with the conditioning for soccer.  This type of training is what we refer to as our sport specific bridge training.

It might be a shock to us as coaches, but the natural progression from speed and agility drills in a training environment to speed and agility with a ball or against a defender is not an automatic thing.  When asked why we do quick foot drills (ladder, line and dot drills), most young athletes will answer something to the effect of, “To get me to run faster,” or “To improve my agility.” When in fact the only thing you are working with the quick foot ladder is the attempt to improve the reaction the athlete has to the ground or to decrease Ground Contact Time (GCT) which is really a form of plyometrics.

Having quick feet is only 1 aspect of speed and agility. One of our BALL AGILITY drills is done by having the player stand on the left side of the ball and with the left leg quickly step over or around the ball and then with the left leg take an immediate outside of the foot touch and push the ball laterally.  Then quickly step over the ball with the right foot and take an immediate outside touch with the right foot back the other way. You could actually see the light bulbs go off in the players head’s when we asked them to treat the step-over drill like a ladder drill and try to get their foot off the ground as quick as possible before the outside touch on the ball.  Their footwork was faster and touches and the accuracy of the drill was much improved.

The players already had quick feet, and their soccer knowledge and skill was already very high, but the bridge between the quick feet and the touch was something new to them.  It is this simple explanation that will make a world of difference in the way an athlete approaches training.

The goal needs to be an increased level of communication between those that train or research the game, and those that coach.  The coach’s job is to coordinate the skill and tactical part of the game while putting players in the position to reach their potential.  The strength and conditioning coach’s job is to improve each players potential for athletic success. Too often, the two types of coaches are blinded by their desire to improve upon their own area of expertise, that they cannot see the big picture.

According to Stegeman (translated by J. S. Skinner), neuromuscular patterns developed in strength training do not generalize over to sport specific patterns of movement unless there is a bridge. To bridge this gap we need to develop new and better ways to incorporate skill into the training sessions as well as athletic development training into the practices.

If this gap is not closed, and integration strategies implemented, then the unstable (diamond shaped) model above becomes the result in regards to sports performance. This represents injury potential, performance inconsistencies, and a very unbalanced approach to an athlete’s development.  In the fall of 2005 the Nigerian Sports Commission sent representatives over to learn more about CAP Programs.  They were amazed with the technology and the education available to the young athletes, but when we went out the fields to watch practices they witnessed the uni-directional approach to skill.

Their comment after witnessing this session was something like, “How is it possible, in this country, with all you have at your disposal, that your young players lack the very basic foundation of athleticism (strength, power and speed)?”

To overcome this problem in development we need to work with each other to provide a very well rounded experience for the players.  A foundation of athleticism, skill, tactics and an understanding of the game and its history will be essential to develop world class athlete’s with passion, pride and the confidence to compete with the rest of the world.

BALL AGILTY is something that each coach can create on his or her own by combining moves with the ball and quick foot / agility drills.  Bridging this gap and incorporating more coordinative skill work with the increased emphasis on athletic development (strength, power and speed) is the path to success!

Soccer Conditioning With a Ball

Is working hard the best way to get in shape?