The Art of Transition Play

Welcome to the FineSoccer Drills Newsletter. Todays featured activity works on transition (both offense to defense and defense to offense). 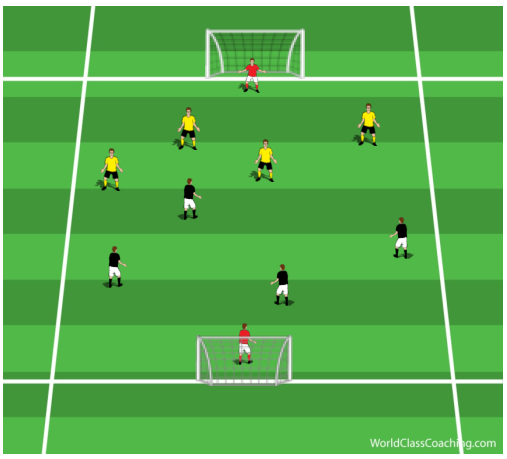 The rules are quite simple, everything is regular rules with one major change. Anytime the coach blows his whistle the team with the ball leaves the ball as is and becomes the defending team and the team that was defending becomes the attacking team.

As an example, if the black team has the ball, as shown in the diagram below, and the whistle blows, they must leave the ball where it is and the yellow team gets the ball and attacks. 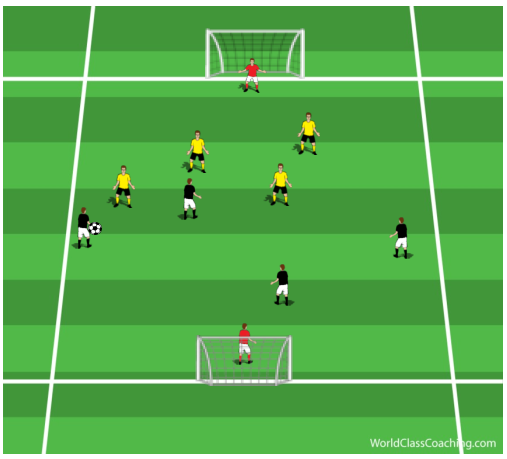 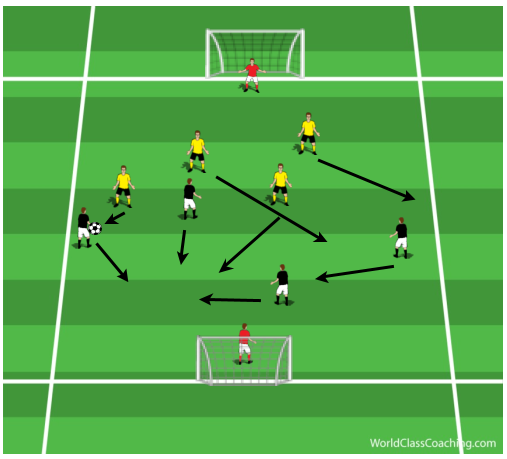 When the whistle blows it’s a free ball for the opposing team. The first player to the ball can dribble, shoot or pass.

The team that loses the ball because of whistle must quickly get back (5 yards off the ball minimum) and get in a good position to defend and offer support.

The team that receives the ball because of the whistle looks to capitalize on the quick transition and attack before the opponent gets back behind the ball.

One thing the team going from offense to defense might try to do is delay the game by kicking the ball away. This is not acceptable (in this activity OR, in my opinion, in a regular game) so do whatever you need to do to discourage this type of unsporting play.

Play for 10 minutes and then take a short break and then play another 10 minutes. This game involves a great deal of fitness as players are sprinting in transition and not taking breaks.

One thing to keep in mind is while you want to emphasize good play and transition the coach can easily influence the score based on when and how often he blows his whistle. This game is about working on transition and not necessarily about winning or losing.

Races with and without the ball

#153 Off Season and Pre Season Conditioning