Technical Station - Including Through Pass and Shooting

This week’s exercise is again a two player exercise. It helps to develop agility, first touch, the timing of runs and through passes, dribbling techniques, passing and shooting. It is a great all-round exercise with a high intensity.

Set Up and Directions
The exercise is set up as shown below. Our player in yellow will be our ‘attacker’ and the player in black will be the ‘feeder’ in this situation. Our attacker begins positioned behind a line of five cones. Two cones are positioned at opposite diagonals, approximately five yards from the last cone from the attacker. The feeder starts centrally between these cones. 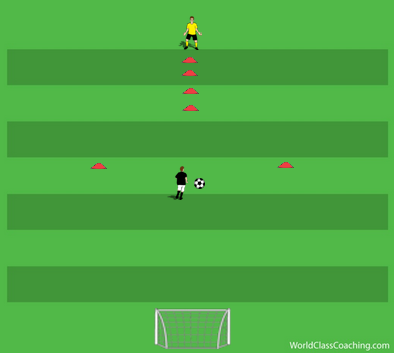 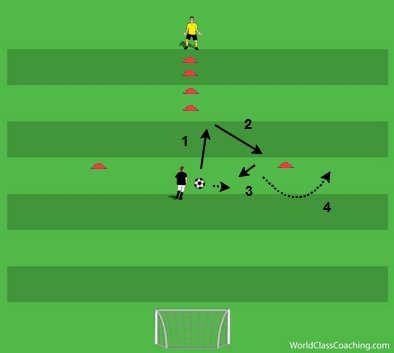 The feeder now plays a through pass in timing with the attackers run as shown below. The attacker collects the pass and dribbles back to his original starting position. Both shown below. 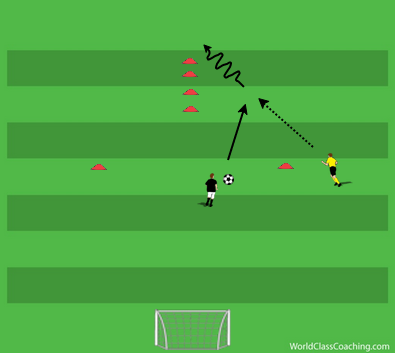 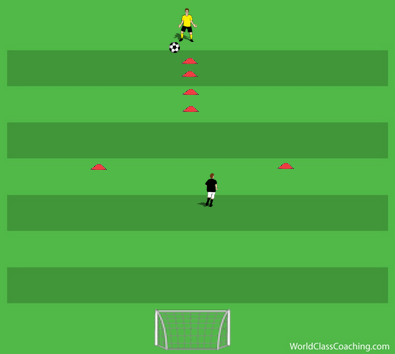 The attacker now performs technique to dribble through the cones (insides / sole etc.) before passing the ball in to the feeder who sets the ball back to one side (the same side the attacker took his first touch towards when receiving the first pass). The attacker runs on to the return pass and takes a shot on goal.

The exercise is then repeated - the attacker will take his first touch and the shot at the end on the opposite side.

Timing
I would use a set number of repetitions, depending on the age and ability of the players anywhere between 4-8 reps before rotating roles would be ideal.

1 – Agility – this can be varied to focus on different ways to change direction/accelerate quickly.
2 – Goalie – add in a goalkeeper to make the finishing more challenging – this could also change the rotation to three players and then there is more ‘rest-time’ for the players if they act as a goalkeeper for a few repetitions.
3 – Dribbling Technique – you could vary this by using different parts of the foot (insides, laces, outsides or combining a few of them).
4 – Defender! – after the attacker dribbles through the cones, they could now go 1v1 with the ‘feeder’ to try and get to goal.