Spain and Portugal are 2 of the top sides in the world, Spain current World and European Champions, and ranked number 1, Portugal are ranked number 8 and are always a dangerous side with players like Ronaldo and Nani in the team. Portugal played Spain in a friendly 2 years ago and won 4-0, but Spain are a different team in competitions, and Portugal knew this game could be the defining moment in a potential Euro Championship win. Portugal played Spain with bravery, playing a high pressing game, with lots of possession, but with more direct play around the goal. Spain were far away from their best during the game and Portugal although played very well, couldn’t capitalise on the overloads they created near the goal. Spain won on penalties and reaches the final, to play against Italy or Germany. 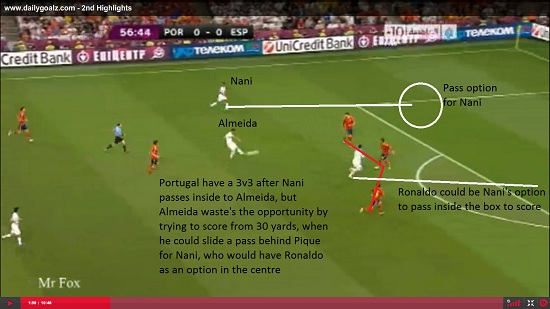 Nani finds Almeida behind Spain’s midfield but as Nani offers a pass behind the defence, Ronaldo makes a run behind

We are really excited about our new book, A Coach's Guide to the 4-3-3. Check out the introduction and a sample excerpt below. The Brazilian National Team under Aymoré Moreira in 1962 was one of the first top tier teams to use the 4-3-3 formation. It was a variation from the 4-2-4 previously employed by the Brazilians. Subsequently other great teams have made

For over 20 years I have coached teams of all ages and abilities from U6's to U18's and from recreational teams to national champions.  And over the years, my coaching philosophy has steadily changed to using more small-sided games in my training sessions...and for the better.

I find that not only do players prefer to play small-sided games, they are a better way of teaching skills, technique and tactics than typical soccer drills and exercises.

Small-sided games also allow players to express their creative side much more than when standing in a line waiting for their turn to make a pass or take a shot for example.

So I am really excited about our new book, Developing Creativity Through Small-Sided Games.  And you can get it either in print OR as an immediate download eBook. 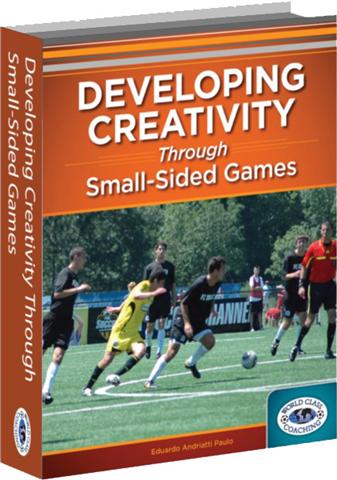 Try more small-sided games in your training sessions and you