Too often it seems that when coaching younger ages and planning practices we forget a major element of the game – goalies. Sure, we send them to goalie-specific training when offered and we have good intentions by not pigeon-holing a kid as only a goalie at that young of an age, but we all still have those couple of kids that tend to be our main goalies. We train the team in defense, offense, set pieces, etc. – so why do we not work more with the keepers as well?

In all honesty, this is most likely due to lack of time, skill and/or extra help at practices. But I refuse to take that as the answer and just let the goalies flounder on their own – they need help from us and they need to work with their teams. Working with the team on drills helps out in two solid ways by letting the keepers show off their own skills (building confidence) and lets the field players see that they can trust their keepers. This keeper-field player trust is a huge aspect of the game that I fear we tend to gloss over many times at younger levels.

So, in addition to a six-step checklist I use when designing drills, I sometimes add in a seventh step. This step revolves around being able to design the drill so that all positions can actively participate; specifically, designing a goalie drill to use field players or a field drill that actively incorporates a goalie.

The drill I offer up today is one I call “Stay on Target…” and it offers the following benefits:

I like this drill for keepers because it lets them practice punting accurately both in direction and distance without the pressure of trying to hit one single spot (the player) – this will build both their punting skill and their confidence. This drill further serves to put the keeper immediately on the defensive by having the player come in and shoot right after the punt.
I like this drill for field players not only for the practice in settling, controlling and shooting, but also because it represents a scenario that will very likely show up in-game – that of the opposing goalie kicking it towards you instead of their player.

The following instructions/dimensions assume a younger team – adjust accordingly based on skill level and age.

Place circles of cones 30-40 yards out from the goal, spread out across the playing area and have a field player in each circle. 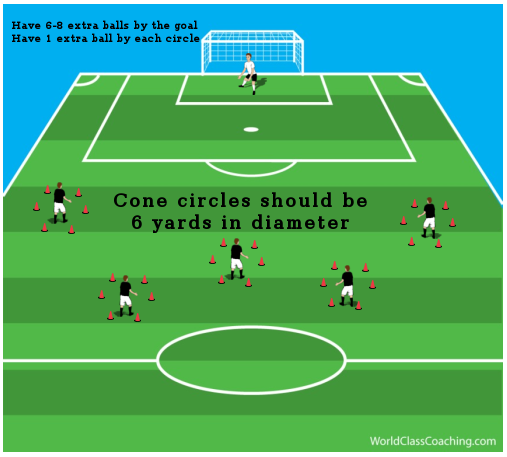 Have the keeper punt a ball to each circle, in any order they choose. 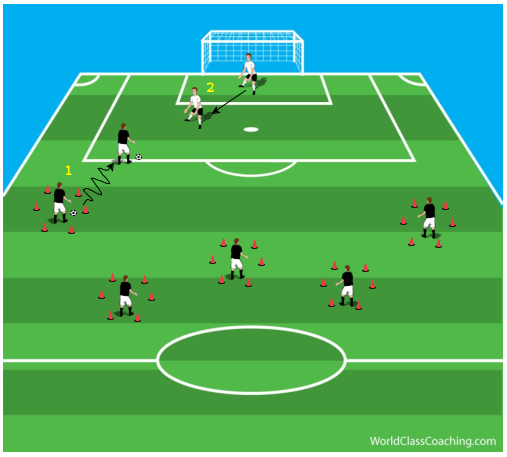 The field player in the circle should settle to gain control and then proceed to explode towards the goal, looking to shoot from around the 18-yard line (1). The keeper should be coming forward to cut down angles and save or deflect the shots (2).

Immediately following each shot, the keeper should grab another ball and repeat the process. Run the full gauntlet of punting to each target three times (i.e. 12-15 punts total) before breaking for 45 seconds. Rinse and repeat as long as you feel is appropriate.

There may be some downtime for the players in the circles, but it should be minimal as this is meant to be a quick drill – fitness is built in to this drill as follows:

Play AWAY from Pressure

Receiving Out of the Air