This practice is focused on improving speed. This component can be divided into: maximal speed, acceleration speed, change of direction speed and deceleration speed. Some of these are required more than others. In soccer, sprints up to 5 meters and changes of direction are the most common and often define whether the goal is scored or not. Speed training requires big load on phosphate system over short period of time. That is why, it focuses on improving the ability of using more ATP from phosphate energy system (fuel) what means more power and speed in actions on the pitch.

Presented exercise includes the most important components of speed for soccer such as acceleration and change of direction speed both with and without the ball. That is combined with shooting practice which helps players to understand in which context speed can be required. In addition, it is highly motivating and engaging practice for most of the groups. This exercise can be used with different number of players and on various levels.

Set up and directions:
Organize two goals, four cones and two markers as on diagram. Dimensions of the middle square should be 3-5 m., while distance to the goal should be 10-15 m. Divide the team into two groups of 3-4 players. Every player should have the ball. Organize one goalkeeper in each goal. Two groups start the exercise at the same time. The ball is played horizontally alongside the goal. After that, players who passed the ball, run to the ball played by the other group and shoot on goal. Afterwards, players take the ball and join back of the opposite group. Exercise continues until signal from the coach. In this basic format of the exercise, acceleration to the ball before shot is crucial. 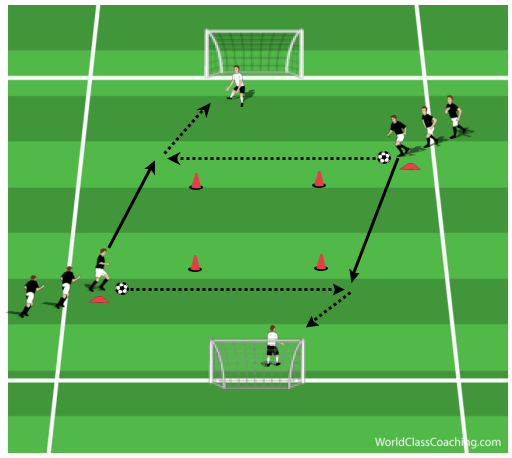 Players can also pass the ball vertically and run alongside the goal to the ball played by the opposite group. That will increase the motivation to reach the ball before goalkeeper, what in turn will influence training intensity. 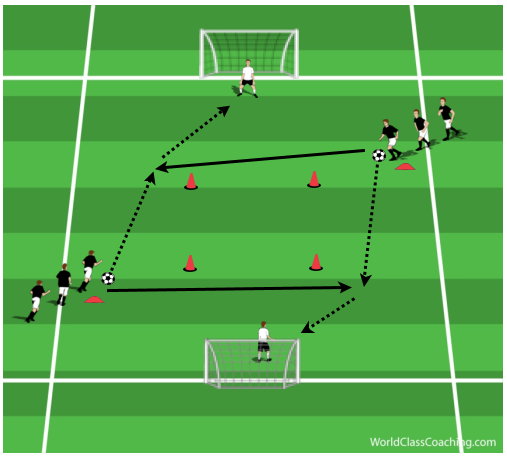 Instead of passing the ball, variation can include dribbling with the ball as shown on the diagram below. That will increase training load but reduce intensity. Players can be also encouraged to perform a trick in the middle square while facing each other. 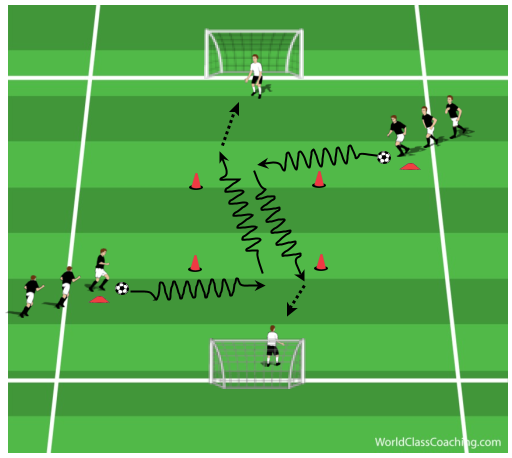 Dribbling can be done in different shapes depending on the coach’s preferences. Movement with the ball shown below can be linked with wrong footed wingers cutting inside and finishing with shot on goal. 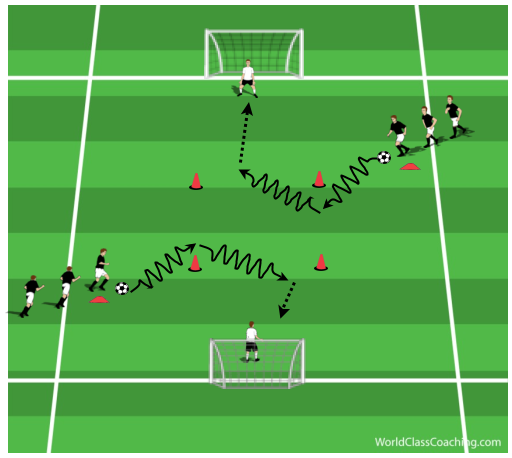 After the shot, second ball can be played into the middle. First player to the ball becomes attacker, second one becomes defender. That again, increases the training load but lowers the intensity what changes the focus of the practice into speed endurance work. This modification includes change of direction, acceleration and deceleration speed. 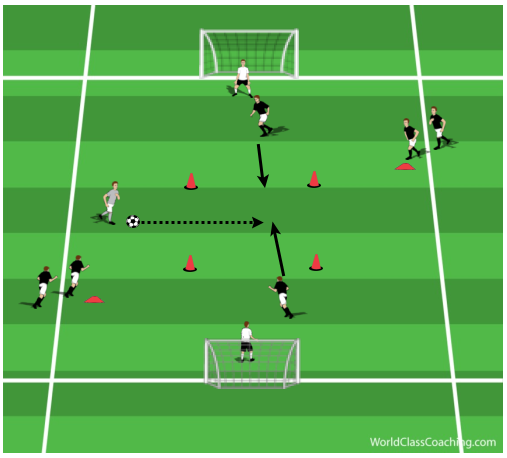 After the players get to the ball, 1v1 duel should last no longer than 4 seconds. Coach controls the timing and should stop the duel when the time is gone. That will encourage a player on the ball to accelerate up to 5 meters and shot on goal quickly. 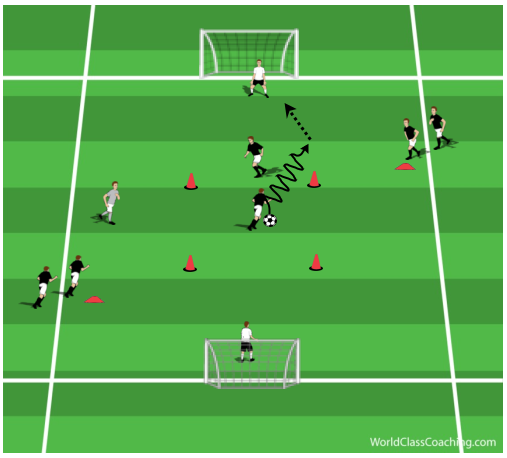 Timing:
Basic format of this practice (without 1v1 duel) should be done in 8-10 repetitions of 100% HR work (5-10 yards) with 30 seconds rest in between. That should be repeated in 2-4 series with 4 minutes rest after each series. Progression with 1v1 duel will last 4-5 seconds longer and should be done in 4-6 repetitions in each of 1-2 series. Rest between repetitions should last 1 minute and between series - 4 minutes.

How Do I Improve Possession For My Team?