Europa League holders and this seasons finalists, Sevilla, are a team with a strong defensive unit and a strong attacking process, particularly on the counter attack.

Against a possession orientated team like Fiorentina, they allowed the Italians to have the ball and then defend from areas where they felt comfortable to make Fiorentina predictable; on the sides where Fiorentia played with ‘inverted wingers’ in a 4-3-3.

From the wide zone, they looked to block the cut inside with close positioning to play 2v1 or if the play was with a midfielder or full back in a wide zone, they would ensure they had solid defensive triangles to cover the pass through the movement to engage 1v1 on the side which would often be in 2v2,3v3 or 4v4 scenarios.

To do this, the central midfielder on the far side would look to cover any angle between the 2 closest pressing players to the ball and block anything diagonally between the lines or into the feet of Gomez., the CF of Fiorentina.

Covering diagonal passes when opponent is trapped into the side zone 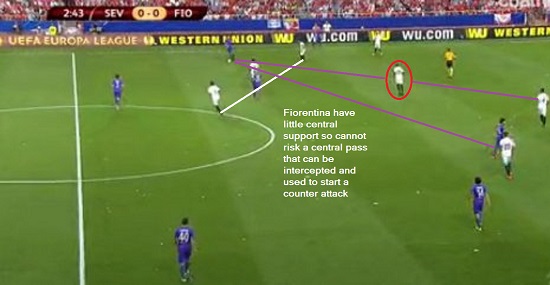 Here, Pasqual finds himself in possession in the wide area and with minimal pressure, but he cannot find an easy pass through the press because the position that M’bia has taken between the players and behind the press, forcing the play to go in a different direction as the 3 players closest to the ball offer an angle to force play back and not across the field, stopping penetration and quick circulation across the field. 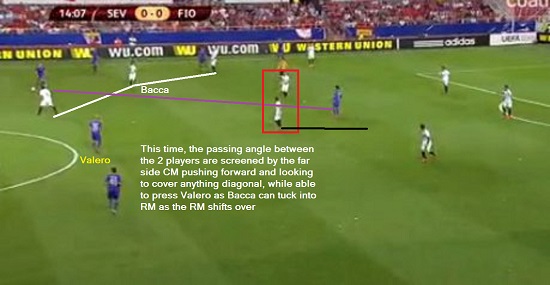 This time, the same 3 players press on the side and try to direct play backwards while the 2 CMs cover the angles behind the area of engagement, blocking the pass to Salah between the lines. The key to this is the far side CM moves forward around 4m and covers the angle better, while able to press Valero if needed, while Bacca can drop into the midfield line if the CM moves onto the top line to press and re-create the 4-4-2 block.

Covering the angles when 3v3 on the side 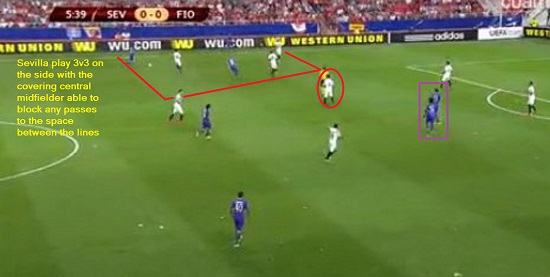 As Sevilla get drawn over to play 3v3 on he side, the far side CM covers the space behind M’Bia who goes to play v Valero. As Fiorentina have now 2 players between the lines, it is very important the that far side CM can block the angle out of the wide zone and into the centre, as the CB would have to press out of line if the ball was to reach this space. The left winger is now tucking in to help pick up Salah who has drifted inside (too far) but still causes a problem if he has the ball. 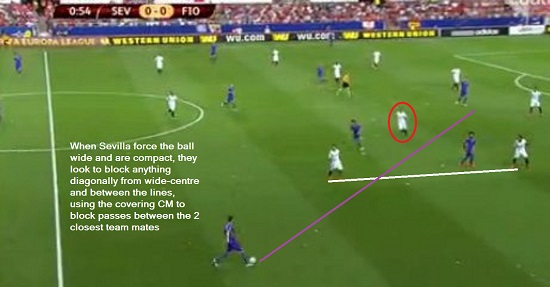 When the Sevilla press can’t get across and shut down the space of the ball carrier, they still look to block anything diagonal, making sure that even if a player is “out of position” that he is covering the space that Fiorentina wish to attack through. This delays the attack, forces it away from its intended direction and allows Sevilla time to regroup and get closer to the ball in a compact shape. 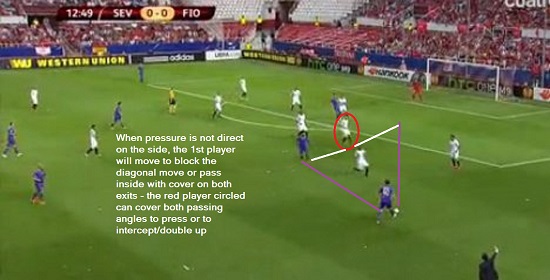 Again, the RB has advanced with the ball and with little pressure, the Winger shifts over to press the ball, while the CM shift over quickly to secure the central space – the RM has tucked so far over that he is on the middle line of the field with the far side CF able to drift over and play RM for a few seconds to make a low block 4-5-1 situationally until the ball is moved backwards.

This is part of many reasons why teams like Sevilla are competitive on a consistent basis in European competition and still compete in the top levels of La Liga.

Too Much Focus on One Player

Atletico Attack the Strong Side