Racing to Finish the Cross

This week we focus on speed and agility combined with crossing and finishing under pressure. The exercise works best when run as a competition as this adds extra motivation for the players. Speed and Agility are obvious essentials in any game of soccer as players in any role or position on the field will benefit from having good speed and being more agile. The crossing and finishing aspects are more honed towards specific positions, so depending on the situation of your team, (whether you rotate players in positions or if your players have set positions) you can work a little bit of positional specific training into this exercise, especially for your outside defenders and midfielders. A good warm up should be performed before this exercise as it is played at a very high tempo.

Set Up and Directions
The exercise is set up as shown below with the coach positioned centrally around 30 yards from goal. The coach must have a supply of soccer balls to keep the exercise fluid. We also have two wide players, positioned on each wing. Each will have three cones laid out in front of them which they will use to perform agility. The wide players will act as neutrals and should try to play crosses into general areas, trying not to favor a team, but giving the players a good chance to score from the cross. Two teams will line up on opposite sides of the goal (minimum two players per team) with a goalkeeper in the goal. 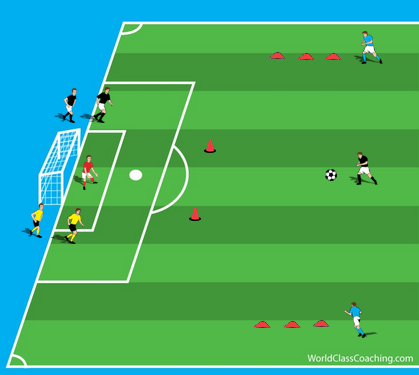 Play begins with the coach playing a pass out to either wing (left wing in the example below), the winger then shuffles through the cones as quickly as possible and then sprints forward to retrieve the pass before dribbling towards the end line.
At the same time, the attacker at the front of each line will sprint out towards the cones positioned just outside the penalty box, before turning back through the gate, as shown below. 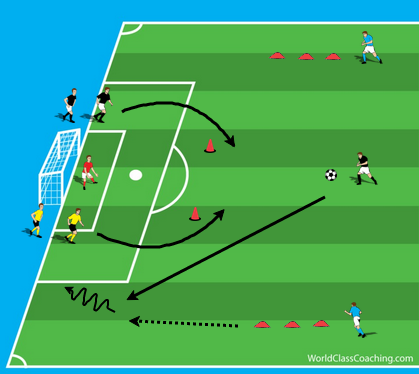 The wide player will then play a low cross into the penalty area, being sure to keep the cross away from the goalkeeper (preferably a diagonally cut-back cross) and the two strikers compete to score against each other and the goalkeeper.

To encourage the players to go as quickly as possible, I award 3 points for a ‘first-time finish’ and 1 point for a regular goal (with a touch to control, or dribbling before a shot). If they manage to get to the cross just ahead of their opponent, then they can finish quickly without too much pressure. If they get there around the same time as the opponent, then they will be put under pressure and will usually need to control the ball before shooting or trying to get past the defender to shoot.

Timing
The timing of the exercise can be varied easily as you can continue adding many variations (shown below). The players should be encouraged to work at a high tempo throughout.