Question - We don't have a goalkeeper coach, so I have to do all the GK training.  I have to get this done in regular training sessions with the team, so do you have any ideas for me to get my goalkeeper training done at the same time as my players?

What the goalkeepers will be working on should be communicated with them before the practice starts. It can be even more beneficial if you send the session in advance to the goalkeeper with the outcomes (key coaching points) explained. Sending videos prior to the session of these outcomes will also help in having the goalkeepers understand what is required of them during the training session.

Practice 8: 1v0 with a recovering defender. 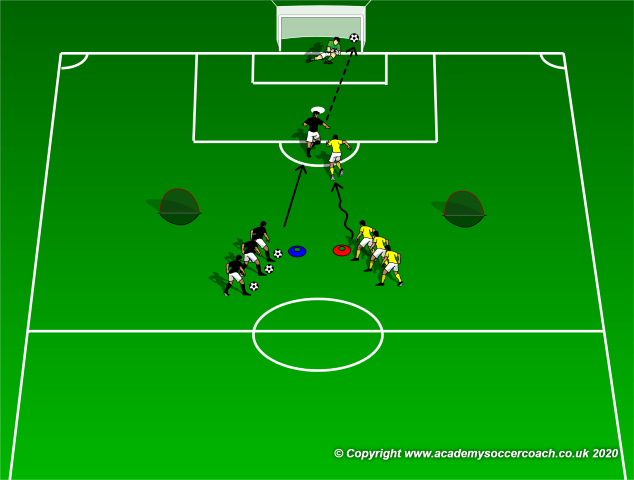 Area of play: The penalty area plus twenty yards extra in length.

Coaching outcomes for the goalkeeper:
1. Ready stance.
2. Stay on feet.
3. Reduce the shooting angle.
4. Initiate the counter attack immediately upon saving the ball. 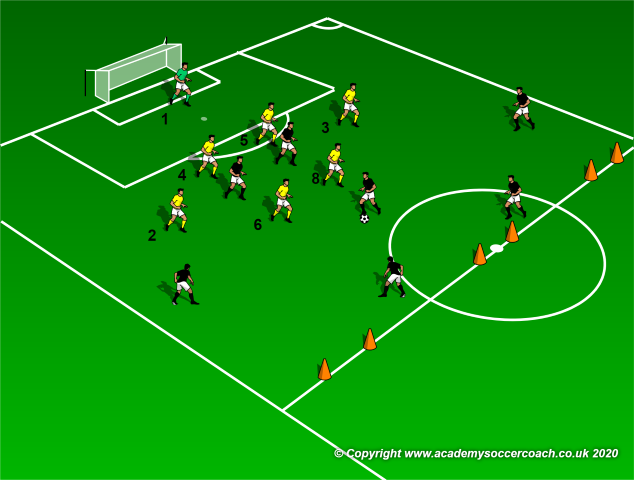 Area of play: Half a regular size soccer pitch.

Description: The black team is composed of midfielders and forwards and play against the yellow team composed of a goalkeeper, the back four and the two central defending midfielders. The black team aims to score in the regular sized goal while the yellow team aims to recover the ball and counter on the three gates positioned across the centre line. Instead of gates, mini goals simulating passing lanes to play vertically may be used.

Coaching outcomes for the goalkeeper:
1. Ready stance.
2. Stay on feet.
3. Reduce the shooting angle.
4. Initiate the counter attack immediately upon saving the ball.
5. Be available for back passes when the team is in the attacking phase so to help the team keep possession of the ball and to switch the point of attack.

Practice 10: Build up centrally under pressure. 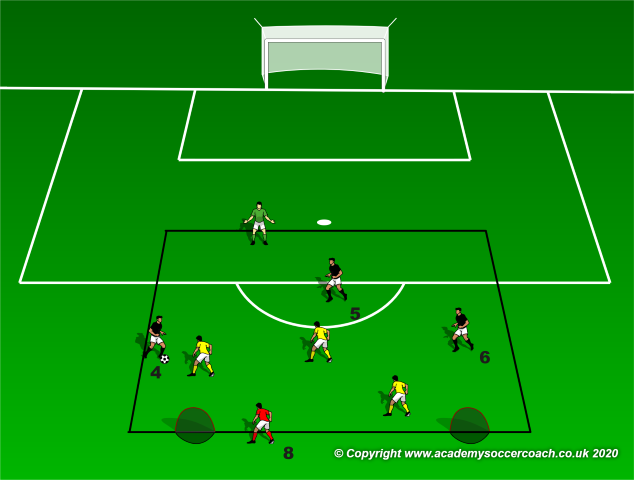 Area of play: 30 yards by 16 yards using the penalty area as a point of reference.

Description: Play always starts from the black team which is composed of a goalkeeper, two central defenders and a defensive midfielder. The opposition team (yellows) is composed of two forwards and an attacking midfielder. A neutral player is positioned between the two mini goals who help both teams when they are in possession of the ball.

Coaching outcomes for the goalkeeper:
1. Maintain the right angle and distance from his teammates.
2. Be light on the balls of feet so to be ready to move rapidly.
3. Accuracy in controlling the ball with a good first touch.
4. Accuracy in passing the ball.
5. Communicates constantly with his teammates.