Functional Training for the Central Defender and Striker: 1 v 1 to a Big Goal while Receiving under Pressure

In this week’s article, we continue with our series that focuses on developing position-specific conditioning needs. The exercise presented below targets both central defenders and strikers and is taken from my book entitled: Total Soccer Conditioning: A ball-Oriented Approach.

The objectives of this activity are to i) coach defenders and strikers the technique and tactics required in 1 v situations close to goal; ii) improve the ability of the striker to receive under pressure; and iii) develop anaerobic endurance.

Set-up and Directions: This activity uses the 18-yard box and the area just outside it for the playing area. Have 5 to 6 players, with a ball each, stand 5 yards outside of the 18-yard box. They should be spaced equally apart. Instruct your central defender and your striker to stand at the penalty spot facing the players with the ball (Figure 1).

Play is initiated by the striker who tries to evade their marker to receive a ball in space (Figure 2). They can receive the ball from any of the players on the outside, but must call in order for the ball to be passed. The defender must attempt to track the striker and is allowed to intercept the pass.

When the striker receives the ball from an outside player, they must attempt to turn and beat the defender in order to get a shot on net (Figure 3).

As soon a shot is made or the defender wins and clears the ball, the striker must immediately look to receive a pass from a different outside player (Figure 4).

Continue this process until the striker has received a pass from all outside players, which they attempt to shoot on net. This is considered one set. Have each pair of players do 3 or 4 sets, but ensure they rest at least 3 minutes between sets.

Note: this exercise is intended to be performed at a high intensity, so encourage both players to work as hard as possible until they complete the set.

Coaching Points: The striker must use fakes and cuts in order to evade their marker. Good footwork and acceleration is essential. The attacker should also attempt to create enough space between themselves and their opponents so that they can receive the ball facing the goal. They should use fakes or speed in order to beat the defender.

The defender must attempt to stay at as close to the attacker as possible when tracking. Good footwork and posture are required. The defender must also decide whether or not they can intercept the pass and must do so only if they are certain they will win the ball. They should not over commit and should attempt to tackle if the attacker takes a poor touch or when they are about to shoot.

Variation: You can vary the way the passes are played into the striker (bounced, lobbed, etc.). You can also vary the exercise by allowing the striker to pass the ball back to the player who he received the ball from in an attempt to draw the defender in and create space behind them. The outside player should be limited to one touch however. 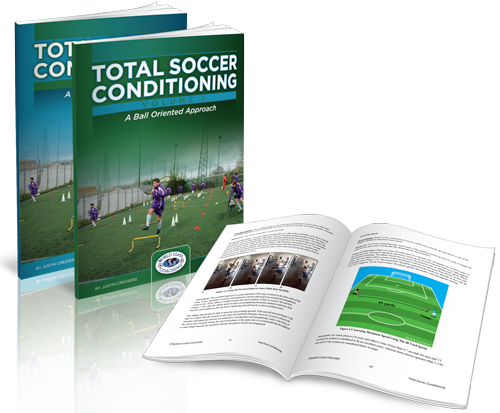