The starting point and length of each section depends on the existing ability of the players you are coaching.

When coaching beginners you will most probably not incorporate the latter stages of the progression into your practice.

When coaching accomplished dribblers you will most probably not incorporate the earlier stages of the progression (although it sometimes helps to go over the technical coaching points once in a while).

In a dribbling progression the objective is to gradually and sequentially increase the pressure on the dribbler by using more difficult drills incrementally until he/she can enjoy success while playing 1 v 1 in a crowded penalty area.

Please note: With younger players I would suggest you split your session up by using a fun game that involves the skill they’ve been working on. This stage is the only one that does not have to follow the numerical sequence. It should be inserted into the practice at whatever point that the players need a mental break. The fun game regenerates motivation and enthusiasm for what’s to come. It gets them in the right frame of mind and prepares them for the hard work in the rest of the practice. The fun game should be selected to enhance the skill worked on. Note: the fun game is especially valuable when coaching younger players.

There are a myriad of fun games that can be conditioned to include a specific move. These include Crab Tackle, Foxes and Rabbits, Wembley, Knock Out, Pirates in the Sea and others too numerous to mention here. It is beyond the scope of this curriculum section to list the alternatives. There are many soccer drills and games books on the market that detail a wide variety of options.

Thank you for helping us get the word out about our article.  Here is the video.

This video is part of the Legendary 1v1 Moves video series. 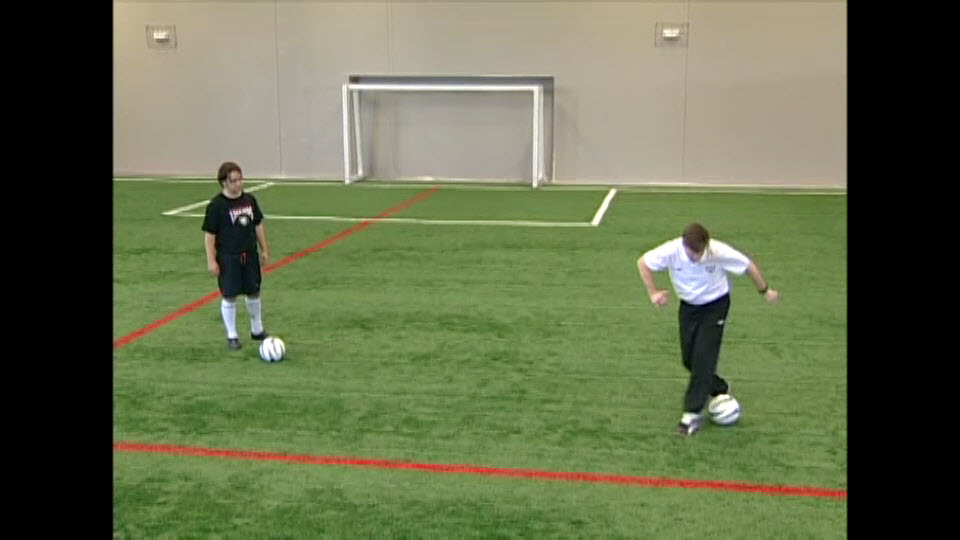 An example of a dribbling practice would be as follows:

*          Fun game/warm up till all kids arrive. The purpose of the warm up is to elevate muscle temperature/heart rate and give the kids something to really look forward to when they arrive. During the crab tackle warm up the coach can call the move that the player had to attempt. As the players become more skilled allow only one touch between moves. The coach or chosen player leader (older teams) calls the move to be worked on and the players perform the specific move until the next move is called.

In the fun warm up game “Pirates in the Sea” the coach uses cones to mark a grid. To earn points the player and her ball must stay in the grid. Each player has a ball and counts each technically correct move they perform as one point. Each player can kick another player’s ball out of the grid. Moves can only be counted if performed inside the grid. Games are timed. At the conclusion of each game each player quickly states her score.

In the fun warm up game “Crab Tackle” the coach uses cones to mark a grid. To win the game the winning player and his/her ball must keep his/her ball in the grid. To start the game a volunteer or the winner of the previous game is the sole “Crab”. The crab must scoot along the ground backwards with hands and feet in contact with the floor. The other players each have a ball and must perform technically correct moves with only one touch between each move or they become a crab. Each time a player’s ball is kicked out of the grid that player becomes a crab. The winner “King or Queen Crab” is the last player left upright.

*          Static technique work on the move. This involves technical practice requirements of the given skill, with limited balanced & rhythmic movement but no explosion or opposition. When players first join the Legends club this phase is extensive. Every move that you intend to teach has to be grilled and drilled so that the technical performance of the move is spot on. An example of this would be the slow repetition of a Fake Shot until the basic movement pattern can be put under the pressure of greater speed. Please note: When demonstrating a move the coach should often turn his back to the player because this allows the player to copy without having to “mirror image” the action. Make sure that you show your players the move from every angle (front, both sides and facing away). Even 3 year olds can play “follow the leader” and learn a difficult skill if the coach demonstrates skills while facing away from the pupil.

*          Dynamic technique work on the move with dynamic and powerful movement into and out of the move. This phase should emphasize speed throughout, and explosion away from, the move but still no opposition.

Here the players are asked to improve their move at speed while retaining technical efficiency. While this is occurring the coach needs to watch players closely and correct technical faults that creep into performance as a result of trying to perform the move faster.

*          Pressure training i.e. how many technically correct moves the players can do in a minute. Carry out 3 or 4 separate one-minute assessments and ask each player to beat their previous score in the subsequent minute. This develops the technical requirements of the given skill under the pressure of speed and fatigue. This exercise tests the “when fatigue steps in skill steps out” theory and pushes back the threshold for technique breakdown. One excellent way to improve performance at speed with intensity of effort and growing fatigue is to run a countdown alarm wristwatch and see how many technically excellent moves each player can do in 60 seconds. The initial moves should be crisp. However as the clock winds down it will take a greater mental effort to retain technical efficiency due to the onset of fatigue.

*          Pressure training in restricted space. Increase the degree of difficulty by putting all players in a limited area (usually a grid marked by cones). Again challenge the players to perform as many technically correct moves as possible in a minute. Any time their ball or body comes into contact with another ball or body the move does not count. Carry out 3 or 4 separate one-minute assessments and ask each player to beat their previous score in the subsequent minute.

*          Pressure training with low level opposition. This is the first “Skill” Stage. A technique becomes a skill - when opposition is introduced. Opposition should initially be relatively passive or low level but develop eventually to full and active defense.

Play “Pirates in the Sea” (see above “warm up” description). Make sure that the grid is small enough to provide optimal challenge/chaos. Challenge the players to perform a technically correct move and then kick another player’s ball out of the grid within two seconds of completing the assigned move. The winner is the player who kicks as the most balls out of the grid in a minute. Carry out 3 or 4 separate one-minute assessments and ask each player to beat their previous score in the subsequent minute.

*          Partner Pressure Training. Partner your players up and ask them to work together to synchronize the assigned move so that both players perform the move simultaneously to beat each other. One player calls the timing of the move. For example by saying, “One two three, Go!” The coach shows the players the best position/game situation in relation to the opponent and mandates that the move be performed from this pre-set starting position every time. Each pair counts the total number of moves performed in a minute. Carry out 3 or 4 separate one-minute assessments and ask each player to beat their previous score in the subsequent minute.

For example, when learning the Matthews move two right footed players would face each other about two yards apart and simultaneously perform a right-footed Matthews on cue. If the move is performed effectively each player will explode past the other at a forty-five degree forward angle to the first sideways touch of the ball. This type of set up should be used in every teaching progression for moves.

*          Non-directional full contact. The purpose of this stage is to make the player comfortable with performing the move under the pressure of full contact defense but increase the chance of successful performance by allowing the move to be performed away from pressure. A point is awarded for each technically correct performance of a move. Carry out 3 or 4 separate one-minute assessments and ask each player to beat their previous score in the subsequent minute.

*          Directional full contact 1 v 1 (going end-to-end, from goal to goal). The purpose of this stage is to make the player comfortable with performing the move under the pressure of full contact defense in a live situation that imitates the variety of live situations that the chosen move can be used in during the real game. All players participate at the same time. A point is awarded for each technically correct performance of a move. Two points are awarded for a goal struck from the play away touch of the move. A goal can only be scored immediately after the technically correct performance of the assigned move. Carry out 3 or 4 separate one-minute assessments and ask each player to beat their previous score in the subsequent minute. When the move being taught is one that requires movement directly towards the defender, (e.g. Matthews, Scissors or Ronaldinho), it is best to ask the defender to retreat to the halfway point of the small practice area after a goal has been scored to give the ball carrier the specific opportunity to run at the defender.

*          Conditioned 1 v 1 game - Small sided games (1 v 1) with specific restrictions, e.g. fake and move within two touches. The use of the 1 v 1 conditioned game is explained in chapter 79 of Andy Barney’s first book Training Soccer Legends copied below. Once great technical skill has been acquired, the conditioned 1 v 1 round robin practice is the cornerstone of the Legends philosophy. This is where the players learn to use their skill at speed, while also learning the essential tactical aspects of 1 v 1. The use of the techniques and tactics described here need to become automatic under big game conditions. This will only happen if the sequential progression described here is given full focus. All team members need to learn and refine their ability to reproduce many of the deceptive dribbling techniques and tactics described here under the extreme pressures found in the crowded penalty area. Until this occurs coaches who use practice time to work on team concepts and skills are severely restricting the development and eventual altitude of their players.

*          With younger players always finish the practice with a fun game. This leaves the kids with a positive memory of your practice and makes them want to come back next time.