As the game evolves so does the pressure on goal keepers. Not only do they have to keep the ball out of the net but they now have to act as a very deep lying play maker, starting plays from the back. This session works on the techniques involved in doing so and gives the opportunity for the keepers to link back in with the rest of the squad after the technical practice. 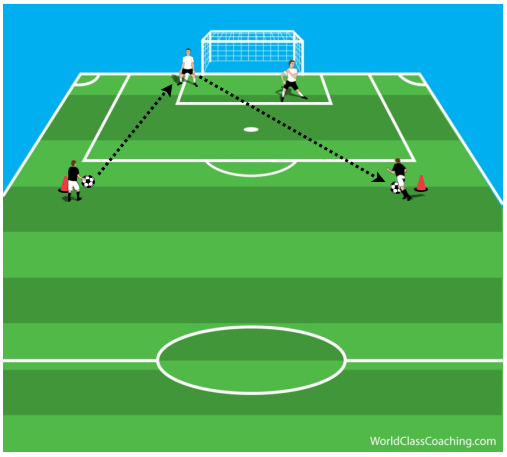 Two goal keepers are positioned around the 6 yard box. With two servers out wide of the 18-yard box.

The servers play the ball in along the floor and the keeper must receive the ball on their back foot and then switch the ball to the opposite server who now plays as a full back and receives the pass. The server then plays the ball back to the keeper he has received from and the keepers switch again.

To increase the difficulty servers can alter the length, distance & width away from goal. This session can also be altered to practice on throwing and rolling, the servers however would go wider to the touchline and cross the ball for the keeper to collect in hands.

Keeping the servers where they are move the keepers to face opposite them. The aim of this progression is for the keepers to play the ball in to box marked by the cones. These boxes can be moved depending on success rate. To make this more challenging you could limit the touches the keepers can have & allow servers to apply pressure to the keepers once they have passed the ball 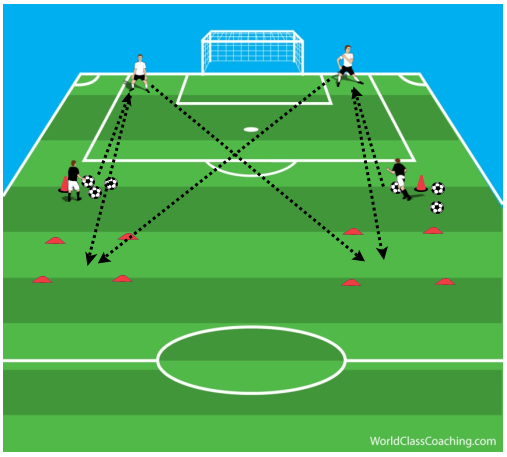 Set up a 30 x 30-yard area with two ends zones about 5 yards deep and spanning the width of the grid. The keepers should attempt to find a keeper in the opposite end zone who will in turn take a touch, pass to their partner who will then attempt to play the ball back across.

If available an extra two players can go in the middle of the grid and attempt to stop the ball, by any means, getting across to the other side. This can progress to players only being allowed to use on foot. 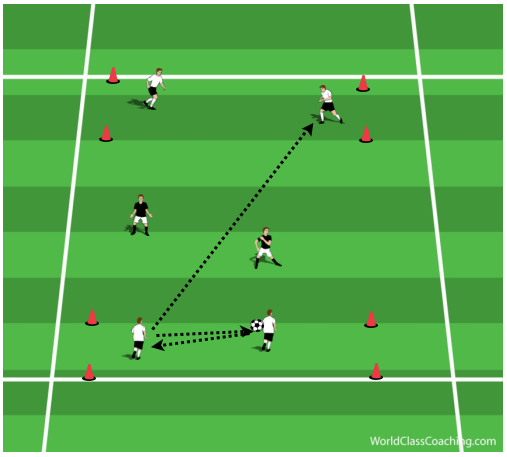 Reassembling the squad, if available if not play even smaller SSG using the keepers. Both teams try and keep possessions of the ball and when opportunity arises have a shot, including keeper. Keepers should be encouraged to use good distribution as practised in the session.