Over the past few years much research has been done on how to reduce the risk of injury in cutting and landing phases of athletic movement. Most researchers agree that the following have a significant effect on the occurrence of lower extremity (ankle and knee) injuries in soccer players.

In this article, I am proposing something much simpler. Although all of the above may come into play at some point, I notice something else. Fast, healthy athletes change direction differently than slow or injured athletes!

Here are two things that faster athletes do better than slower athletes:

First, watch your quick players stop suddenly. They decelerate by allowing their heel to hit the ground first (ankle in a dorsiflexed position – toe up) then roll smoothly onto a full foot. This may be a protective mechanism involving the hamstring or calf muscles to counteract the high peak breaking forces that are being generated. The hamstring muscles resist forces that strain the ACL, whereas when the quadriceps muscle contract they significantly increase strain on the ACL. By pulling the toe up when breaking you allow the hamstrings to fire and hold the knee in a more stable position. This is one reason why so many physical therapists will prescribe hamstring exercises as injury prevention.

I see so many females and weaker, slower males stop by planting on the ball of their foot. This allows their quads to fire and the knee to drift over the toe putting the knee at risk and not efficiently reducing breaking forces. This results in a clumsy, awkward stopping motion.

The second factor that separates fast from slow, and strong from weak is the use of the inside leg to control these breaking forces. When running forward, planting, turning to the left and running back the way you came (a complete 180 degree change of direction), the majority of the breaking forces during the cut should be put on the left leg (inside leg). When done correctly, the athlete should start the breaking process (deceleration) with the right leg (see figure 1), then make half the turn (90 degrees) by the time the left heal hits the ground (see figure 2). At this point the left hamstrings and calves fire and the athlete starts to “sit” into the cut and lean the upper body in the direction they wish to go (back the way they came). In a snapshot, this position may look similar to a lateral lunge (see figure 3 below) with the upper body leaning over the inside (left) leg.

By the time the right foot (outside leg) hits the ground most of the force has been reduced and the right leg can start the acceleration process (pushing them out of the cut instead of taking all the force). If the athlete was running too fast to effectively control the breaking forces with the inside leg, the outside leg acts as a protective breaking measure to help balance the athlete before acceleration.

At this point the athlete picks up the inside leg about 1 to 2 inches off the ground and gravity actually pulls the leaning athlete out of the cut (see figure 3). Then the athlete drives the left leg back 3-6 inches while the body continues to rotate and fall towards the left (the direction they wish to run) and they accelerate out of the cut with very little stress on the knee and little to no rotational forces acting on the knee. 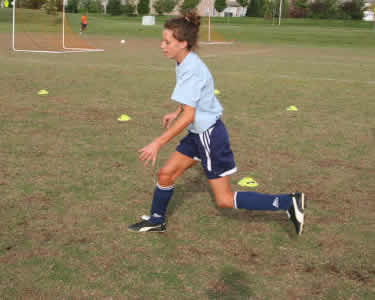 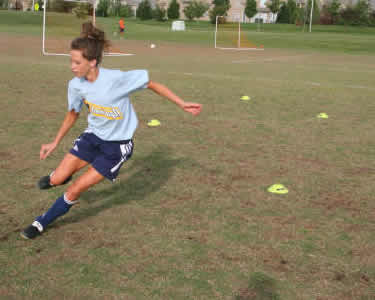 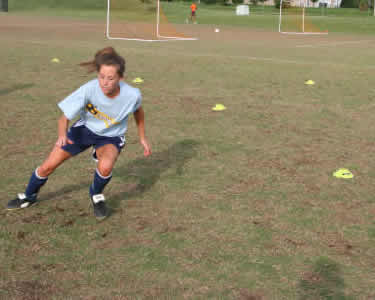 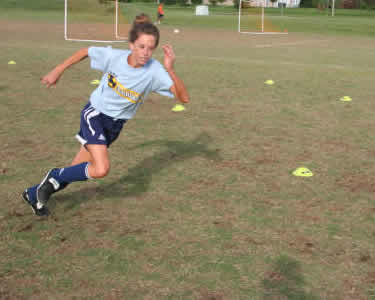 If the athlete is taught to cut by planting hard on the outside leg you may notice several things. First, you will see large amounts of stress on the knee and ankle (shown in the figures below). Also you will see their upper body drift away from the direction they wish to go causing them to pause in the cut (appearing slow). We refer to this as getting “stuck” in the cut. And finally, they will usually come into the cut taller or more extended putting their ankle and knee in jeopardy. All of these will cause you to not only be much slower out of the directional change, but also significantly raise your chance of serious injury. 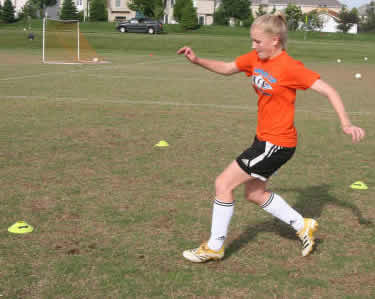 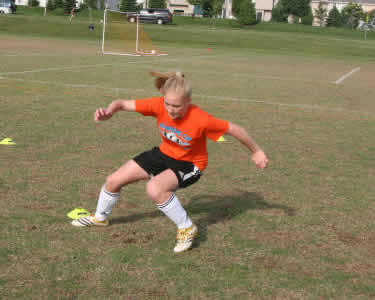 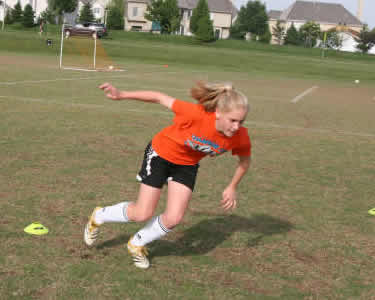 Now with this being said, we do realize that you will have to plant on the outside leg at some point in some activity, so you should never neglect training drills that allow for the use of the outside leg. We have just noticed with thousands of young soccer players that the fast ones, the athletes that have the most confidence in high speed change of direction, use their inside leg as a primary decelerator. Below are training drills that you may choose to add to your program.