Can You Clear Me Now?

An important skill for any keeper is the ability to take a pass from a defender and then clear the ball. This typically comes in the form of a back-pass or trail-pass from a defender in trouble and the keeper blasting the ball as far as they can in whatever direction they’re facing at the time. This is a good play and any keeper should be able to do it.

But a hallmark of a good or experienced keeper goes a step beyond the haphazard clear. As any pro keeper shows, even in trouble, this clearance should be more than just a kick – it needs to be at worst a good pass and at best the start to a tactical play. When Buffon, De Gea or Ter Stegen gets a pass from a defender, they don’t send it into the stands (usually) – they already know exactly where to place the ball before the pass even takes place.

The drill I offer up today is one I call “Can You Clear Me Now?” and it offers the following benefits:

I like this drill for keepers because it gives them a safe environment to build confidence in putting clearances where they need to go.

I like this drill for field players because it helps the players realize where to go to get open for a clearance.

This drill is also a wonderful drill for building field player-keeper trust and can easily lead to set tactical plays.

INSTRUCTIONS
In Phase 1, place field players as shown below with one defender at cone A and 1-2 field players each at cones B and C. Place all the balls at cone A. The keeper should be at the edge of the goal box. 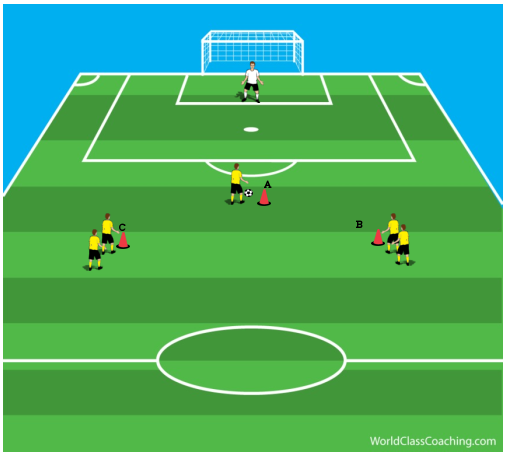 The defender at cone A begins by yelling “Keeper….Trail!” to alert the keeper they need help. The keeper should begin advancing as A hastily passes the ball back (simulating being threatened by an attacker). 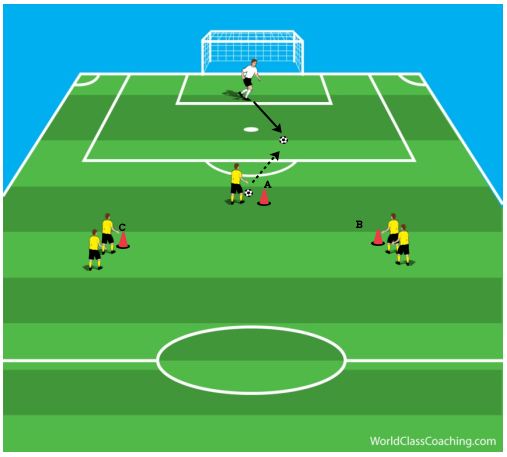 At this point, there are multiple options: 1) have the keeper kick in a simple rotation (e.g. left first, then center, then right), 2) have a coach yelling a direction (left, right, center) for the keeper to kick to or 3) have the keeper decide mid-run and call out a direction or specific player target themselves. Option 1 is obviously the simplest while option 2 and 3 take more concentration and awareness, but in any of the scenarios, the keeper should be placing the ball in the determined area where a player should be able to make a relatively short run to obtain it and then heading back to the edge of the goal box to reset after the clearance. 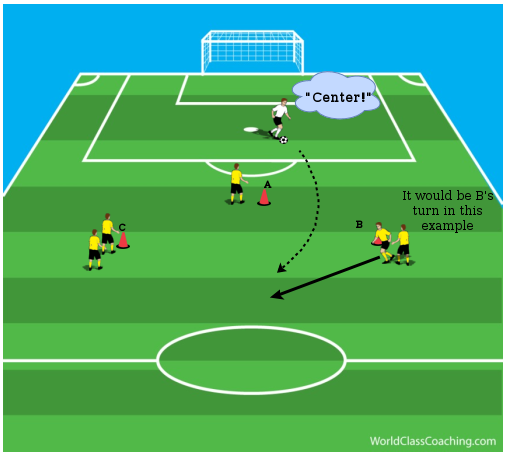 After the keeper is consistently hitting their target areas, move to Phase 2 – pressure from attackers. Place an attacker a short distance behind defender A that should put pressure on both the defender and the keeper once the pass goes off. If you want to add more challenge for the field players, pair an attacker with each player at B and C to pressure them upon going to get the clearance.

With two field players at each of cones B & C, this can be a fairly quick-paced drill – as soon as the field player receives the clearance, defender A immediately starts the process again by passing the next ball back to the keeper. Continue this pace and the keepers and field players will all be kept quite active.

There is a bit of fitness built in for all players, but the depth of it will be determined by the chosen pace: