In the times, when the teams are organised in defence so well, narrowing up spaces and patiently pressurising and covering, it is difficult for the teams to break through and create chances using conventional possession play. Therefore, it is becoming more and more popular not to try to possess the ball, but rather invite the opposition to attack and exploit their weaknesses in transition phases. One of those methods is a quick attack, a golden mean between patient positional attack and counter attack. It can be classified as a part of attacking phase, however it has still many transitional characteristics such as quick penetration, exploiting spaces in behind of the opposition defence, through passes, early crosses or forward runs.

When defensive unit is in possession, the priority would be to exploit spaces in behind of opposition defenders. That would be initiated by a goalkeeper passing the ball into one of the defenders (usually not playing long from a goal kick as it is more predictable), what will invite the opposition to slightly push up, what will then open up spaces for the striker to make a run in behind of defence.

Here comes the crucial role of midfielders, who should first come towards the ball making a ‘fake’ movements to receive, what will then drag opposition midfielders with them and create spaces for strikers to receive. The trigger for midfielders and strikers to make their movements is when the defender in possession is not pressurised and lifts his head up.

It is useful to introduce pattern combinations and movements between strikers what will speed up the play and make it harder to defend. For example, one striker might come short and try to head the ball to the second striker making a run in behind of defence.

As the ball is played to the strikers, it is crucial for midfielders to make immediate forward supporting runs. That can be especially used if midfielders overtake the opposition and arrive around the box earlier. In the best case scenario it will create a situational overload around the penalty box.

As a second priority, wide areas can be used to break through the lines. Useful spaces emerge between opposition centre backs and full backs. Here comes the crucial role of full backs who should make forward runs into those spaces. Wingers in this case would come inside and cause a problem for a centre back.

If playing directly into the final third is not available, using midfielders to either turn to play forwards or feed defenders, who then play forwards can be effective. When attacking quickly, using wall passes is very popular as it gives a player additional time to look for options as well as sets the ball to play directly forwards over longer distances.

Second crucial role of midfielders would be to make forward runs in behind of the defenders (similarly to strikers before) from second lines (from deep). Opposition midfielders will often not follow and defenders will already have a striker to deal with. These are very dangerous and effective runs if well timed.

Another player to make a run from deep is a full back. That is especially useful when switching play and getting into opposite side of the pitch. In this case full back would make a run in behind the opposition full back, on his blind side. Switching play will also mean that forward running full back will have more space and time to receive and drive forwards.

Upon receiving, the role the full back will be either drive towards centre of the pitch (priority) or towards the wing. Going into wide areas, will give enough time for other players to run into the box. However, attacking quickly will often mean an early cross with only one or two players in the box. The strikers should be also prepared for that as priority would be to exploit disorganisation of the opposition back three rather than overloading it with more attacking players. 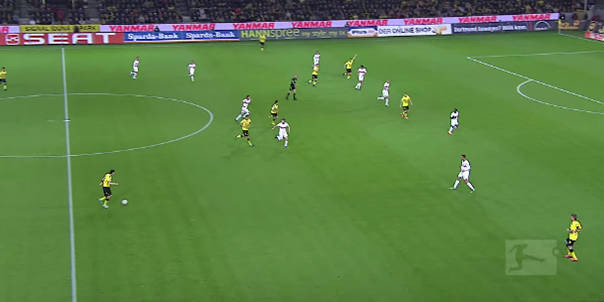 However the team choses to attack, it is essential to have plan B and C as an alternative in case the strategy doesn’t work. On the other hand, if the time is divided for practicing many different tactics, the quality of each one will drop and, therefore, will be less effective.