All too often coaches train agility with their athletes simply by running pattern-based drills with ladders, dots, cones or lines. And although this is a necessary tactic in teaching pattern movement, it quickly loses it value once the players understand where they need to go. The player’s focus is isolated on getting to the cone by reaching with the foot or hand. Their vision is focused on the cone or line where they lose the athletic feel of the pattern, and when this happens the drill loses its effectiveness. 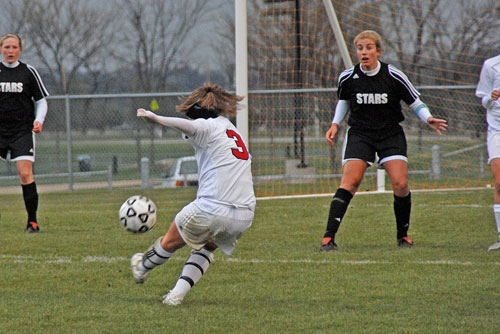 In reactive-situational agility we do not want the player focused on moving to a spot on the field, and we certainly do not want them looking down, reaching with their foot or constricting their vision to a single point of reference. Instead we want them moving to spaces, anticipating situations, planning a strategy and reacting at the most opportune time.

My suggestion today would be to teach the patterns first, and once the players understand the pattern, begin coaching them to react to another player’s movement or to react to a played ball. This gets the focus of the drill off the cones and fully engages a player into a situation. Coaches have hundreds of drills that set up situations and build this type of communication and timing, but we miss the boat when we do not use these drills to develop game speed and agility.  Instead, I see drills where the players are either focused on the technical aspects of the drill, or simply running through speed ladders, hopping over hurdles or backpedaling in an unrealistic, non-game specific way around a cone before making a run to the ball.

Coaches sometimes assume that just because you put the ladder or cones down we can call it fitness, speed or agility training. But we have noticed over the past 10 years that although these devices are great with the younger age groups at developing rhythm, coordination and targeting, many times these devices can slow down the drill to the point where it is not developing speed or agility at all. And even when the drill is performed at a high speed, the pattern, focus and outcome are usually somewhat counterproductive to what we are really trying to achieve.

What if we took just one of the movements in one of these situational drills and taught the players how to better position themselves for speed? What if we taught them how to move off the ball and create space, and then integrated a very fast paced, repetitive drill where the player had to stay focused on what was going on around them? If we created drills that built anticipation and recognition through speed of thought, and reactive vision we could get our players reacting quickly, in well timed runs in a rhythmic flow that better mimics the game.

Research has shown that players react quicker to known situations and stimuli. The more often a player sees a situation, hypothetically, the quicker their anticipation and perception skills could become which should lead to quicker reaction. Putting the players in situations and having them react quickly based on what they see, verses blindly going through a pattern that never changes, could lead to quicker and more efficient play. Our site shows dozens of these drills in various posts, but here is one video on this topic…