From the conditioning point of view, this practice is focused on improving aerobic capacity. This is a fundamental physical quality needed to develop all the other conditioning elements. The main role of aerobic capacity is to deliver a proper supply of oxygen into muscles. This mainly happens through improvements made in lung capacity (ventilation), number of red blood cells and heart strength (circulation). The presented game also develops movement off the ball, support play, staying on the ball and playing through tight spaces. Tactically, it can link to playing through midfield areas and dealing with man marking opposition.

Set up and directions
Organize an area of approximately 24 x 40 yards. Divide it further into two end zones of 24 x 10 yards and four boxes in the middle of 12 x 10 yards each. Set up two small goals behind both end zones. Divide the group into two teams of seven and further designate two neutral floaters. There should be 2v1 situation in the end zones and then 1v1 in each of the four boxes as shown on the diagram below. Floaters can go anywhere in the playing area. Rest of the players are locked in their zones. 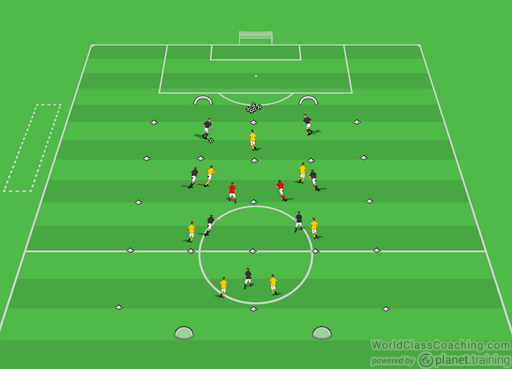 The game starts from one of the end zones, where the attacking team tries to establish possession in 2v1 and then play through the middle. One defending player in the end zones tries to win the ball back and score in one of the two goals. Floaters can go into the end zone to support only if required. 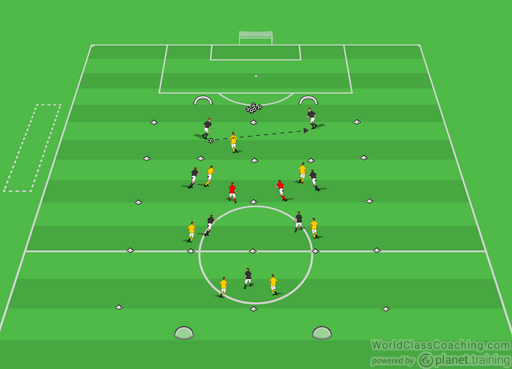 The aim of the team in possession is to play through the middle squares using at least two players which are locked in 1v1 boxes to then find a striker in the opposite end zone. Quickness of support and detail of staying on the ball and combination play should be emphasized. If the opposition team wins the ball at any point in the middle, they still have to play through at least two boxes before playing it into the striker. Floaters can’t pass into striker. 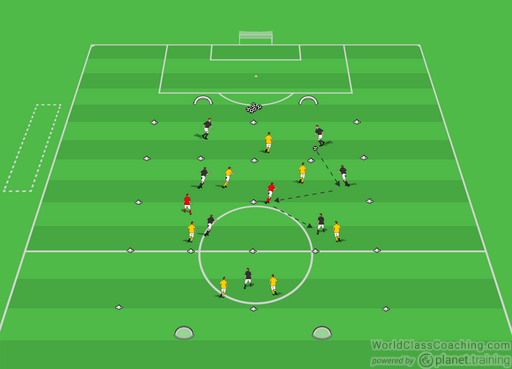 Striker should make constant movements in relation to the ball and try to cause problems for two defenders marking him. As he gets on the ball, he should attempt to score in one of the two small goals as soon as possible. 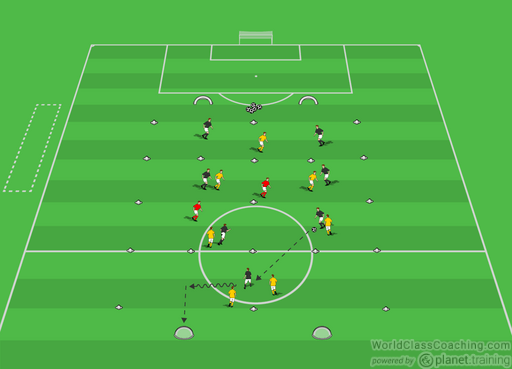 Timing:The game should be played 10-15 minutes and repeated 2-6 times, with 2 minutes active rest between repetitions.

Variations:
- 5v5+2 (using target player)
- Play directly into striker as soon as possible (don’t have to visit two boxes)
- One attacking player can join in to help the striker