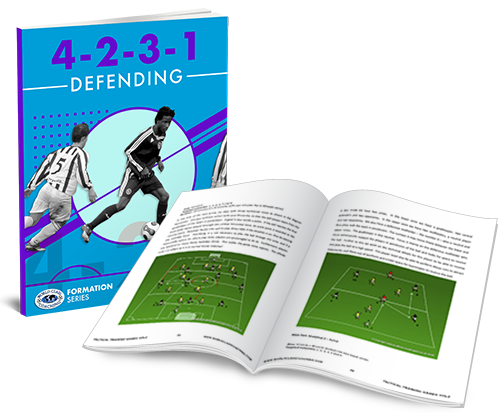 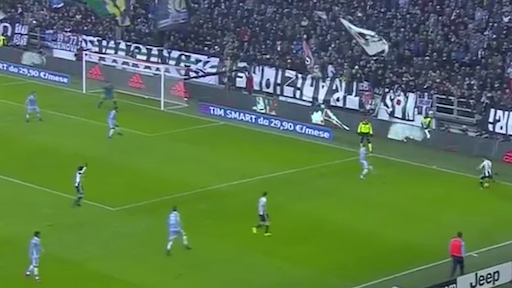 In this example, Pjanic founds himself attempting a cross pass form the right flank after an attacking move development; Cuadrado, the right winger and Lichstiner, the right fullback were placed behind him to support the move and also to preventively ensure balance behind the ball line. Cuadrado could had been a safer option, to keep the possession and to create a clear scoring chance.

Lazio’s defense was properly placed with zonal defense to save the goal inside the 18 y box, with a huge numerical advantage against Juventus forwards 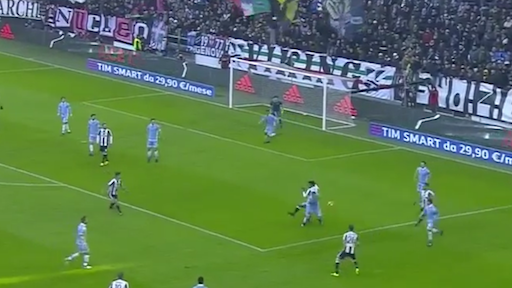 The ball was rebounded out of the box and a 3 v 3 duel was created near the ball just out of the right corner of the Lazio’s 18 y box; Cuadrado fighted for the ball, but the opposition maintained the possession despite this pressure actions. Dybala, the center advanced midfielder get closer to the ball. 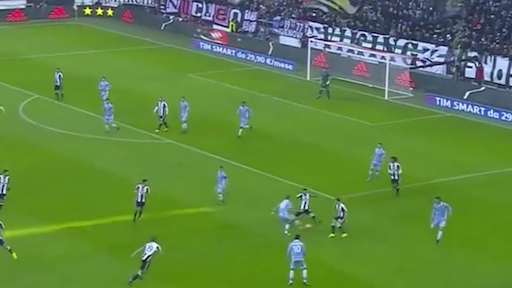 Pjanic also tried to win the ball back, retreating back, Lichsteiner tried to double team the ball carrier, to prevent him from playing forward, as Juventus was now placed very high on the field, with a line of three forwards (Mandzukic, Higuain and Cuadrado, from left to right). 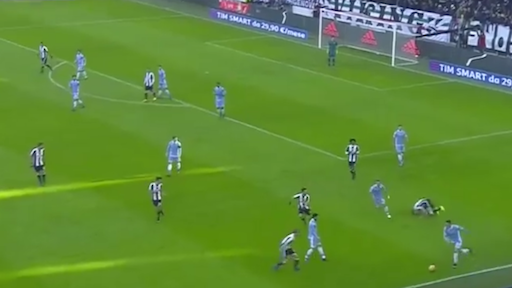 This objective was reached thanks to the center back Bonucci, who pushed very high to follow the right fullback, to Dybala who covered the position of the right holding midfielder and Khedira, who shifted across to get closer to the ball area.

A high line of three was shaped behind the ball line. 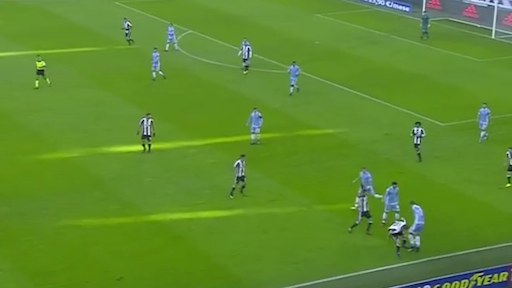 Aggressive pressure action was taken against Lazio’s left wingback, to force him backward (two lines of four can be noticed in the picture; the higher one that was spread out along the opposition defense line and the second one near the ball area… 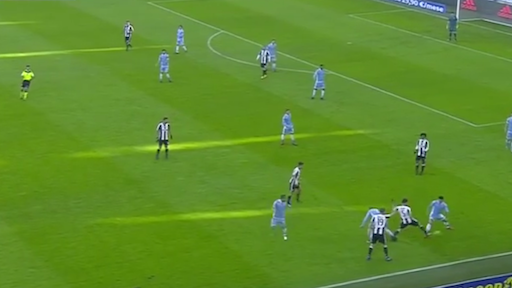 …The right center back Bonucci and one holding midfielder blocked the opposition possession in the end.

Aggressive pressure action was taken because of the high positioning of the team and to keep the opposition lines backward to prevent them from playing up the pitch.

The recovery of the ball was not the main objective of these high and strong pressure, but blocking the opposition from playing out when the space in the middle third could not be covered properly just after the loss of possession.

This sequence was another example of ball area overload, due to unbalanced team shape at the back of the ball area. 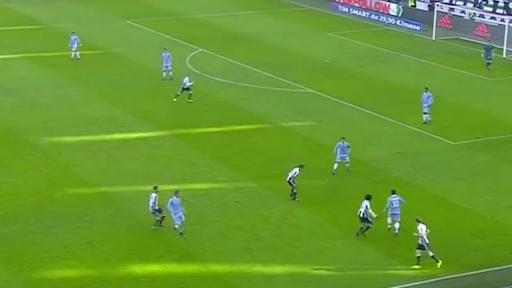 The opposition had the possession inside the first third and Juventus forced the direction backward thanks to aggressive pressure behind the ball line. Cuadrado pressed the ball carrier, Dybala could have pressed the nearest passing option, Pjanic was very high on the field, marking the closes forward passing option. The right fullback Lichsteiner ran back to provide balance. 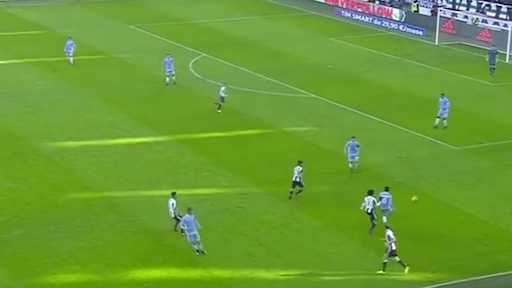 Aggressive pressure was the best tactical choice due to overload of the ball area and the creation of a strong side along the right attacking flank. 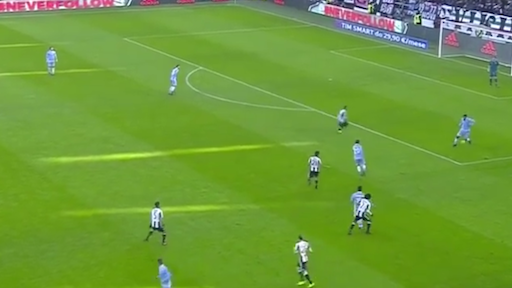 Lazio left center back received, but the center forward Higuain prevented him from switching the side on the right, forcing him again toward the left side, where Juventus ensured numerical advantage (3 v 1 in front of the ball and 2 v 1 at the back thanks to Pjanic and Lichsteiner). 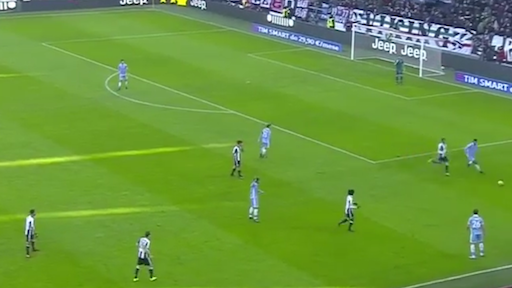 The development of the defensive move took Juventus to press deep (Higuain against the ball carrier, Cuadrado potentially again the opposition left wing back, Dybala, who could pressed both the opponents at his left or right sides).

Lichsteiner and Pjanic ensured balance at the back of the ball area along the right side of the final third.

Again, the opposition possession was prevented from being developed forward by aggressive pressure.

When Juventus lost the possession being shaped inside the opposition half, the first tactical aim was to save the space at the back, rather than defending forward with pressure. 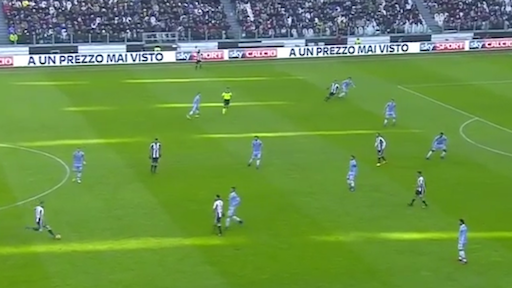 Bonucci, the right center back attempted a long pass. Juventus was shaped with a line of 3 forwards, as the left advanced midfielder Mandzukic and the center one Dybala were positioned along the same line of the center forward Higuain. The center holding midfielders, Khedira and Pjanic, provided balance in front of the center back.

The left fullback Asamoah was supporting the attacking move on the left in a classic attacking development of the 1-4-2-3-1 system of play. 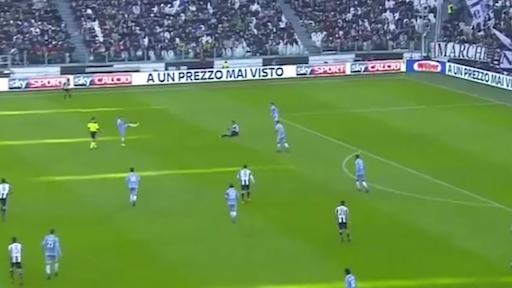 The pass attempt was intercepted and Juventus was found with 3 players on the other side of the ball line; all the attacking players were to far away to press the ball carrier, but the holding midfielders could provide balance in the middle third. 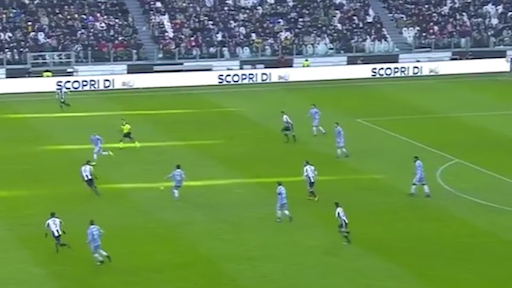 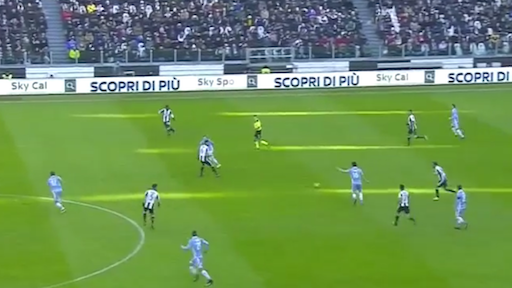 …Forcing a back return pass, allowing the left fullback to have enough time to retreat back 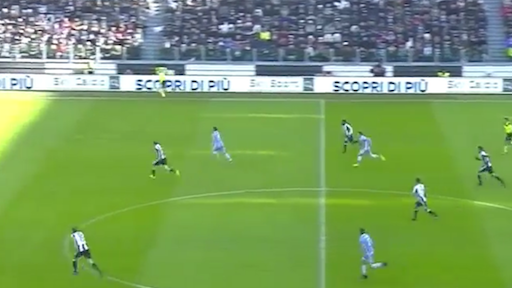 A long pass was that the left center back could track, was then forced… 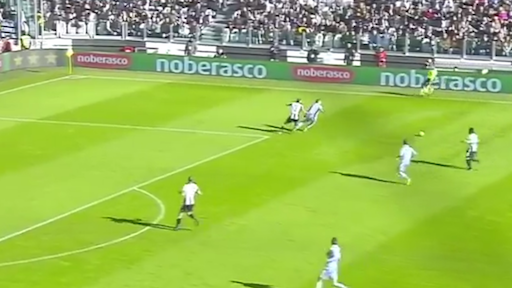 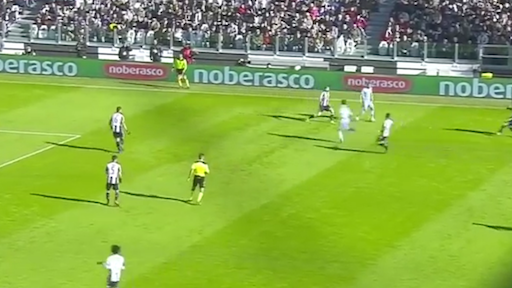 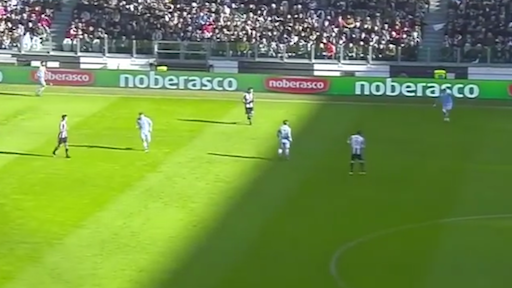 Lazio was forced to build up to play in the middle third, after a forced long pass and the proper coverage of the depth. 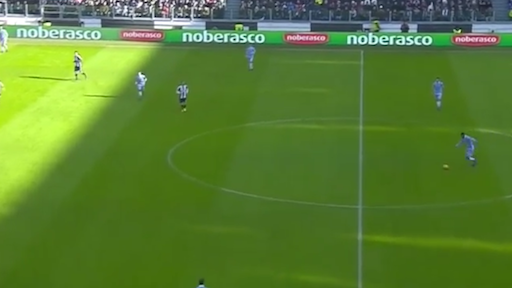 Meanwhile, Juventus could shape the defense lines at the back again. 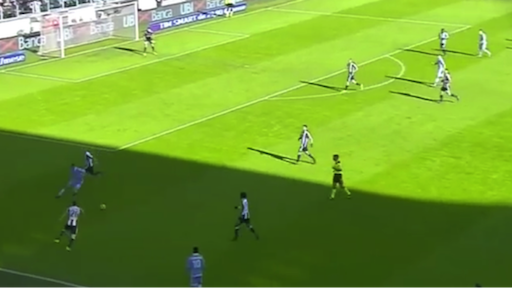 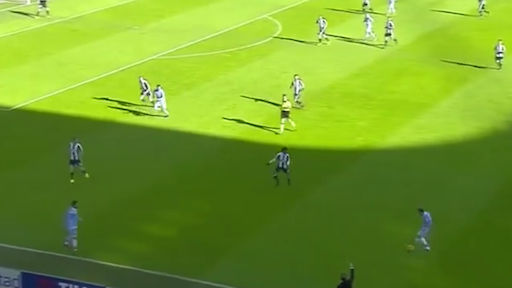 …Forcing Lazio to play backward again and creating a 4 v 2 duel along the right flank, after as the opposition left wing back tried to pass forward again… 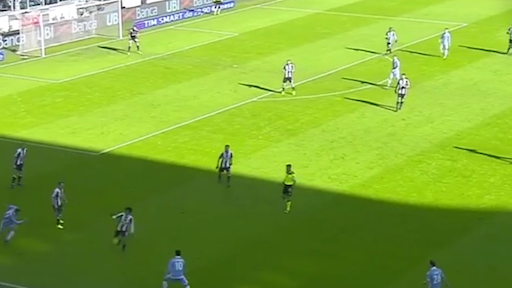 …And winning the ball back in the end.