This exercise is focused on developing Anaerobic Power in one of the variations of 1v1 situation. Organisation of the practice encourages players to dribble, shoot and change direction on the maximum intensity.

Set up and directions
Set up a 30x40 yards area with one goal, 4 cones and 3 markers as shown on the diagram below. Width of each goal to dribble through should be 4 yards, while the distance between each marker should be between 8 to 12 yards. One player (defender) starts on the marker between two goals, one player on the middle marker and the rest of the players on the marker furthest away from the full-sized goal. Each player from that group should have one ball. The game starts as the player from that group passes the ball into the middle player. The defender becomes active on the first touch of the receiver. After one pair (attacker and defender) has finished they join back of the queue and another two players start. Players should switch their roles after each repetition. 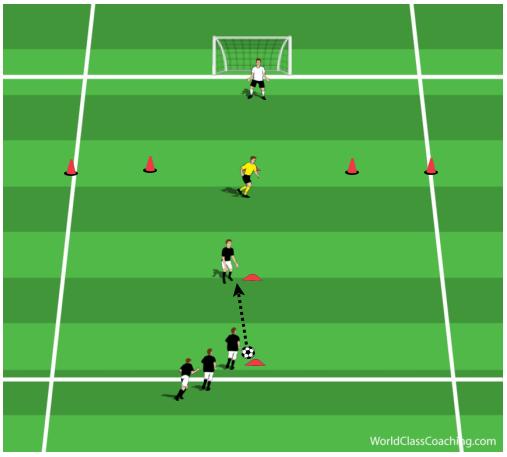 As we can see below, on the first touch of the attacking player, defender becomes active. If the defender gets the ball, his aim is to pass the ball to the first player from the group positioned on the cone. 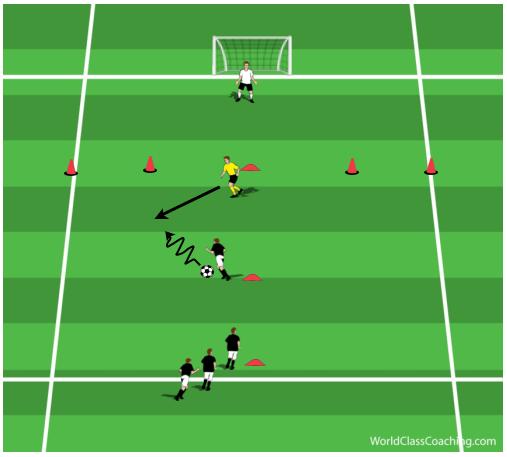 Before attacking player can score, he needs to dribble through one of the goals. Defender can follow him into the scoring area. Both players should count their points (attacker for scoring a goal, defender for getting the ball and passing it) to increase competitiveness. 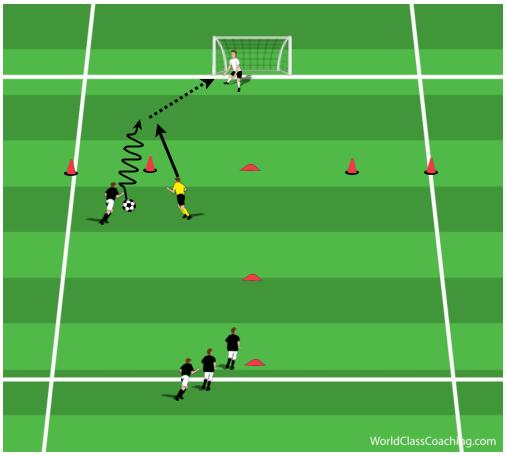 Timing:
Each 1v1 duel should last no longer than 6 seconds. That should be repeated 4-6 times in 1-2 series. Rest between repetitions should be 1 minute (can be managed automatically depending on the number of players), while rest between series should last 4 minutes. Intensity should be 100% (>180 bpm).