Talk about a way to end the holiday season in the Premier League: Chelsea's Jose Mourinho sank defensively at White Hart Lane while facing a Tottenham side with very fresh legs. Mauricio Pochettino's men suffocated the Blues in two stages: first by reducing the space around Matic and Fabregas and then forcing Matic, Cahill and Ivanovic to chase opponents much livelier than they were.

Both the Spurs and the Blues appeared on the pitch at White Hart Lane in the same 4-2-3-1 configuration. The midfield trio for the Blues of Fabregas, Oscar and Matic found themselves facing Bentaleb, Mason and Eriksen. The similarities continued given the offensive line profiles of percussion players Hazard and Townsend, multipurpose wide players in Willian and Chadli and forwards Diego Costa and Kane.

The Spurs announced their intentions very quickly in this match. Right from the kick-off, they pressed to defend any advancement from Chelsea. Their first line, Kane and Eriksen, worked to squeeze play to the flanks where Chadli and Townsend were able to assist. Rose Walker was pressed into action with the duties of marking both Willian and Hazard.

For Tottenham, Kane was quite eccentric occupying the space between Terry and Cahill to help form a very compact 4-2-3-1. Out wide it was Chadli with Ivanovic and Townsend with Azpilicueta. Centrally, Eriksen was positioned between Fabregas and Matic and would press closer to the ball leaving the other to be tasked with cover. The double pivot of Mason and Bentaleb occupied the area while Oscar roamed and had to respond to the movements of Hazard or Willian, as well.

Unable to advance the ball forward quickly due to lack of space, the Blues were left with two options: feed Fabregas or Matic in hopes they can relieve some of the pressure or play the ball long. Both of these options forced Chadli and Townsend to, in effect, fall back, which then reshaped Tottenham into more of a 4-4-1-1. For the Spurs, the only real danger was Eriksen being the only one between centrally in these situations. However, Mason would join him, reshaping again into a temporary 4-1-4-1 and limiting the freedom of Matic and Fabregas even more. 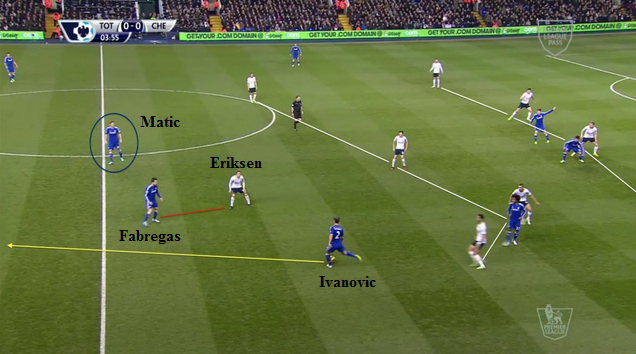 Due to the amount of pressure, Ivanovic, unable to play with Fabregas because of Eriksen, is forced to give the ball back to Cahill. The ultimate goal for the Blues here is to find Matic, alone in the middle. 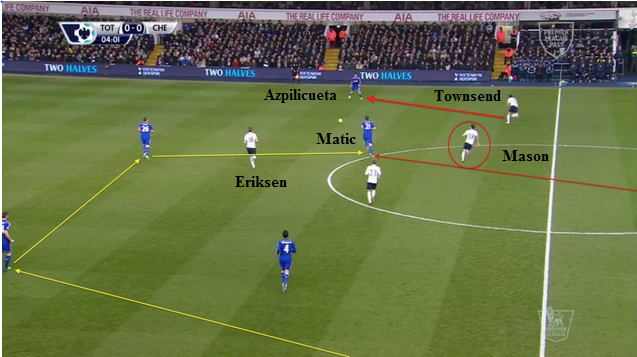 Matic receives the ball but Mason has anticipated well and goes to supplement Eriksen. The Serb is unable to play it back leaving only a lateral option to Azpilicueta who finds himself under immediate pressure from Townsend, who is closing him down. 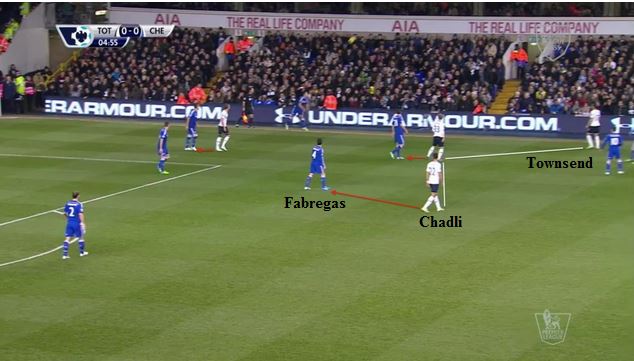 Townsend manages to apply enough pressure and force the ball out of touch. This gives Tottenham the opportunity to press even higher and tighten up their block pressing wide. This also allows Chadli to slip away from Ivanovic and slide over to cover Fabregas. 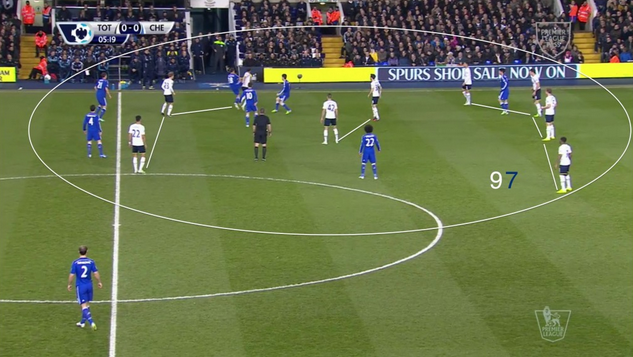 On the touchlines, Tottenham works to maintain the same density with a block that is extremely compact. Here we see the Spurs in a numbers up situation (9 vs 7) in only a quarter of their own half.

As the minutes ticked on however, Jose Mourinho’s formation did manage to find some space to test Lloris. Long distribution from Courtois bypassed the Spurs block and enabled Fabregas to find enough freedom to try to find Diego Costa or Hazard. Willian also made himself available in midfield to put the Spurs on the back foot.

Never-the-less, these positive moments from the Blues didn’t last long as Chelsea once again began to show signs of weakness, in particular in their inability to effectively squeeze Tottenham. Dembele proved quite valuable to keep the ball under pressure, opening the game to Rose Walker or spraying the ball wide which would force the Blues to recover. Chadli’s work in the heart of the park often allowed the Spurs to win those important second balls. During build-up, the Belgian did not hesitate to work with Eriksen in dealing with Matic and Fabregas. With Dembele handling Oscar, Bentaleb was freed up to challenge the ball itself.

Another player that benefited from Chadli’s work in the middle was Kane who worked across the width of the park. Whether he was winning balls or frustrating the defense of the Blues, the English striker was always more effective eccentrically when he managed to get rid of the pressure and release himself from the mark of Terry Cahill. Once he was able to get free, his speed allowed him to make a difference, especially out on the left flank where Ivanovic and Cahill were never able to stop him. 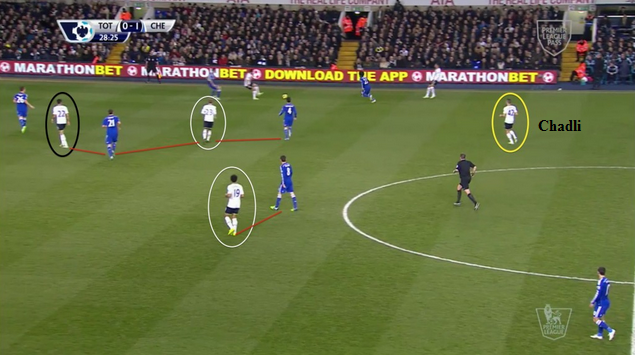 Chadli’s role as a false winger reduced the effectiveness of the Matic and Fabregas pairing. 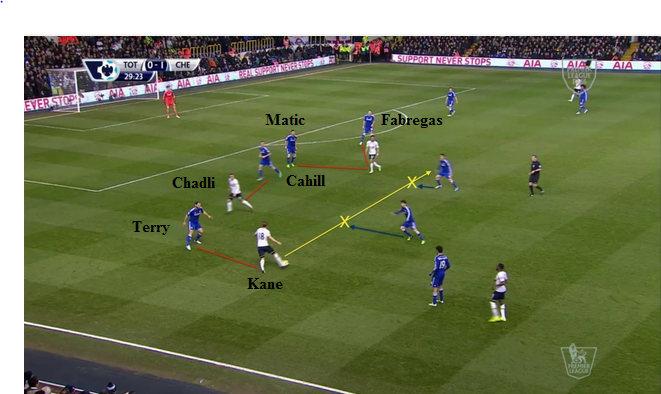 Positioned between Terry, Cahill, Matic and Fabregas; Chadli freed up space for Kane to pop out wide and become available from width.

In addition to stifling their opponents in the midfield, the Spurs also took advantage of the density their 4-2-3-1 provided to do evil against Chelsea’s attack and expose their weaknesses. 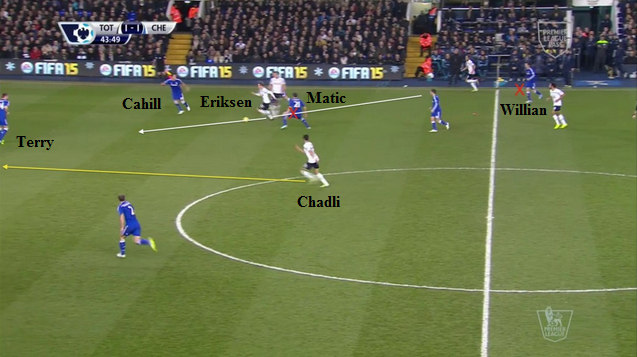 On the second goal, Eriksen is the one who makes the difference when he blows by and eliminates Matic at a time when Terry and Cahill are without cover and Chadli is making a run up the heart of the park in support. The final piece of the puzzle is added when Willian stops marking Rose and allows him to freely finish the follow-up after the Belgian had hit the post.

…the speed at which Tottenham opened up, the Chadli-Kane connection, their density and transition going forward were all How The Match Was Won!