The Proper Use of Give and Goes

During my days as a trainer, a lot of head coaches were (and still are) obsessed with the give and go, as if it’s the lifeblood of being a good team. While it is definitely a great combination to get behind opposition lines of defense it is not the be all and end all of attacking. Players and coaches alike need to understand it is a tool to use for specific scenarios to progress an attack, not to be used all the time as different scenarios will not allow it.
So to keep coaches happy and work on the give and go I developed a session that constantly worked on using the combination in the correct scenario and only using it when you should. Teaching the players about looking for the right placement of players for it to be successful and then transferring it into game scenarios.

Set up an area 40x30, place 2 cones each 10 yards from the touch line and 3 in the middle like the diagram. Partner your players up with one dribbling the ball and one supporting at an angle. The cones represent defenders. 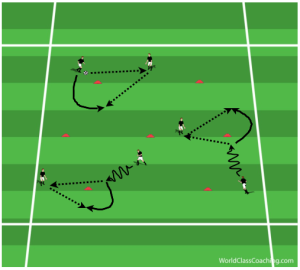 Now pick up the middle 3 cones and you have an area with 3 zones. Two 10 yard end zones and a middle 20 yard area. This is to facilitate the amount of give and goes to a higher than normal occurrence during a game to give players repetition at executing the combination. Start with numbers up in all areas and tell the defenders they must press the ball. This is cheating a little but it is there to help your players see the scenario. 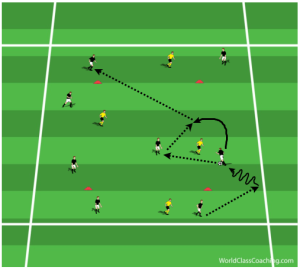 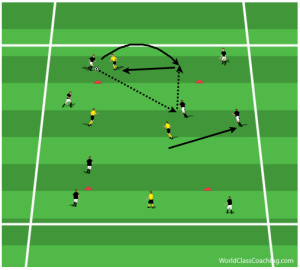 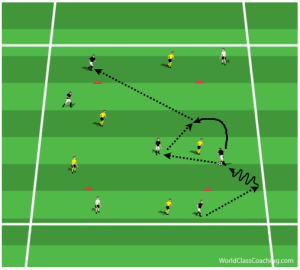 Phase of Play: Give and Goes to Advance an Attack Time: 30 mins
Now we move on to a more game like scenario and discuss areas on the field where opportunities for give and goes are relevant to an attack. Remember the give and go is a tool to be used to progress up the field to eventually create a scoring opportunity, we do not simply teach our players to perform this combination because ‘it looks good’. Players must also understand where and when to use it. 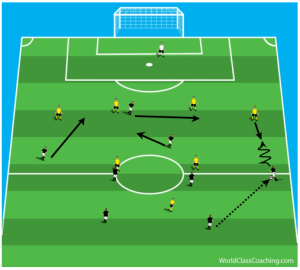 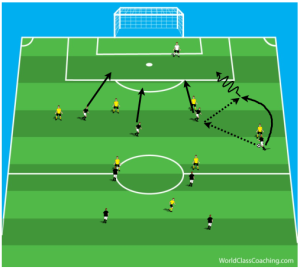 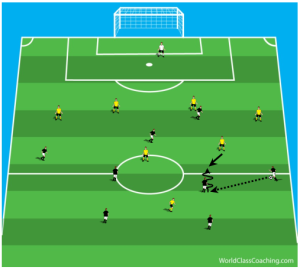 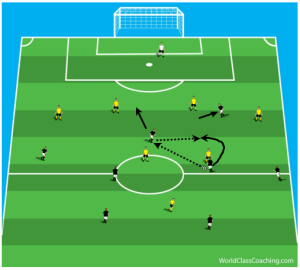 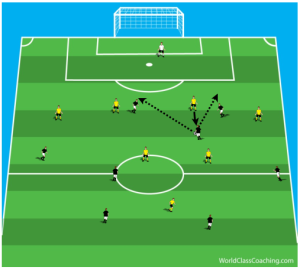 Remember it is imperative that when scrimmaging, players understand when and where to attempt a give and go and not to force the combination. There should be 2v1 scenario with space to exploit behind the defender. It should also be used as a tool to advance and attack or create an opportunity, not to simply achieve a give and go. The amount of give and go opportunities will naturally decrease but look for players to intelligently determine when the combination is possible.