The Importance of the Triangle Midfield

Today's post is the introduction from our book, The Triangle Midfield.  This book has proved very popular since its release a few weeks ago.

A Triangle is a shape that has three distinct points creating three sides that may be even or uneven to one another and form angles at each connection. A Triangle Midfield is a formation that includes three players centrally in a triangle formation that maintain the same or similar distances from one another while maintaining the same or a similar pace in the same direction staying with the flow and progression of the game.

This book will not be for basic or fundamental training or coaching, but is designed for more of a higher level of training and understanding. It will cover different formations associated with three central midfielders and not only formations with JUST three central midfielders. It will explain the functionality of the formation, how the formation is trained for possession and attacking roles and responsibilities, and training for defensive roles and responsibilities. Formations covered will include the 1-4-3-3, 1-4-2-3-1, 1-4-3-2-1, 1-3-5-2, and the 1-4-5-1.

One of the most successful examples of the triangle midfield can be found first at the club level with Barcelona. The last 15 years Barcelona have been considered the most successful club team in the world. Building on the teachings from Johan Cruyff, the Barcelona School and Academy have focused on the same development and training approaches as first introduced in the 1960’s by famed Dutch Coach, Rinus Michels. Johan Cruyff was a player for Michels when the creation of ‘Total Soccer’ was introduced to the world. Cruyff, considered one of the greatest players to ever play the game, brought this brand of soccer to Barcelona as a player, and later as a coach. His techniques and teachings are still used there today and can be seen in the successes of Barcelona and in the Spanish National Team.

The modern Barcelona team now also features one of the greatest players to ever play the game in Lionel Messi. At the time this book was being created, Messi had just broken the single season record of goals in a calendar year, a record held by famed German attacker Gerd Mueller. The record held by Mueller since 1972 when he scored 85 goals in one calendar year was eclipsed by Messi as he scored 2 goals against Real Betis in a league match to extend their league lead to 7 points and give Messi the record with 86 goals and still 3 to play before the end of the year.

His legacy and success can be attributed to the strength of the triangle midfield and to the quality of supporting players, such as a triangle midfield of Xavi, Busquets, and Iniesta. Its philosophy surrounds keeping the shape of the triangle midfield, but shifting and interacting other players so that marking becomes an impossibility. This is where the concept of ‘Total Football’ came from. The Triangle Midfield is the ENGINE of the system and must be firing perfectly. If it is, then the system you are playing will dominate your opponent in their half of the field.

The Triangle Midfield by Rob Podeyn. 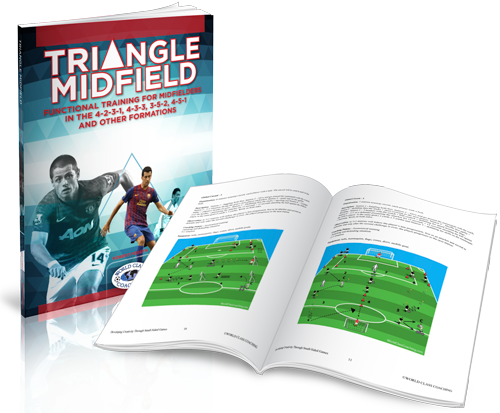