Team competitions are always fun. They demand each player to work to their maximum effort as they represent their team. This technical relay race will focus on techniques of dribbling the ball and ends with the player shooting.

Set Up and Directions
The exercise is set up as shown below. We have 3 players representing each team, Yellow and Black. Player one begins at the end line of the field, with a ball at his feet. Player one has a line of small cones in front of him. Player two waits behind the tall cones, which are placed in a zig-zag formation, diagonal from each other. Player three waits behind a ladder; this is the player that will finish the relay by taking a shot. 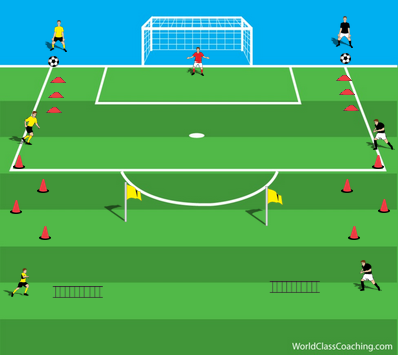 Station one – Dribble through the cones using the inside of feet only.

Station two – Dribble through the cones using the sole of feet only.

Station three – Pass the ball towards the end of the ladder, perform quick feet movements through the ladder and collect the ball again at the end.

When completing station three, the player must make a move and take a touch to either side of the flag and shoot as quickly as possible. 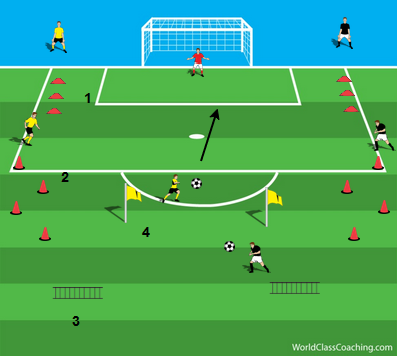 Above we see player one and two have finished their stations and have returned to the beginning, player three is in the process of taking his shot (yellow team).

Timing
This game will be played in high tempo bursts. Playing through from the first whistle until a player takes a shot.
A way to extend the game is by having the players rotate with every shot, the first team to get all players back into the same starting positions wins.

Variations
You can vary/change each station. You could even change the techniques used to get through each station.