In the previous Pre-Game Drill (“Pre-Game I – Quick Shot Parade”) we made the most of pre-game warm-up time by using the entire team to work on shooting while getting the keeper ready for the game. In this next installment of pre-game drills however, we’re going to dial in the focus to work with just the keeper. Specifically we will be working on quick feet, quick hands and awareness.

This is a simple but effective drill that requires only two participants and a goalie; the two participants could be anyone – reserve players, subs, coaches, siblings, parents….basically anyone that is around who can also consistently throw and catch a soccer ball.

The drill I offer up today is one I call “Hot Box” and it offers the following benefits:

I like this drill for keepers because it works on warming up their body and mind while getting them focused on handling the ball.

Start by having the two throwers about 15-20 feet apart from each other, with the keeper in between the two. One thrower should have a ball. Use either the goal box or a similar setup using cones to form a box of sorts to keep the drill contained in. 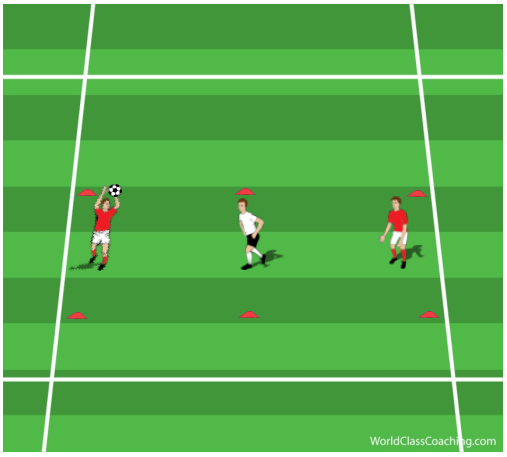 The throwers should attempt to get the ball to their partner (by throw or maybe a light volley) – but in such a way that the keeper almost always has a somewhat decent chance at intercepting the ball. After all, we’re not interested in how the throwers play keep-away; we want the throwers to “make it interesting” and challenge the keeper with line drive throws, arching tosses, low balls, etc. 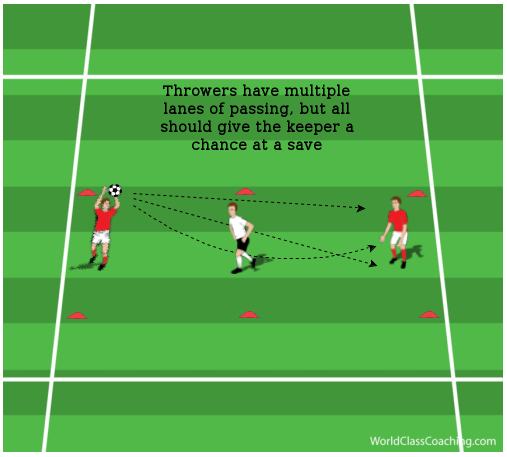 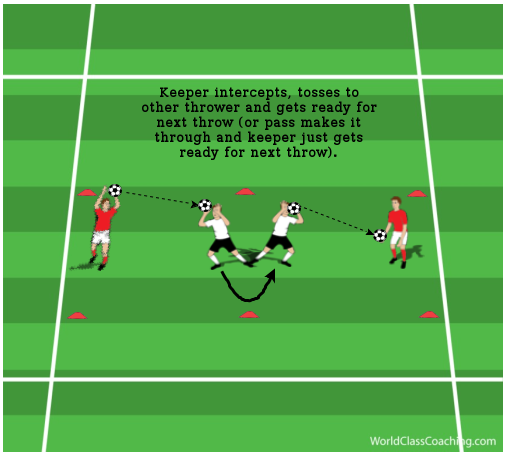 At its foundation, again this drill is simple …but effective. By tossing the ball just out of the keeper’s reach, they are forced to take quick steps and have quick hands – two major fundamental aspects we want a keeper to show in-game, so there’s every reason to have them warm-up by working those elements.

If you have more advanced/older players or more time to work on this drill:

There is a quite bit of fitness built in for keeper, but the depth of it will be determined mainly by the quickness of and number of throwers. Remember to not push the keeper too hard if this is used as a pre-game warm-up – just get them focused and loose.