Since the summer, Liverpool have struggled to get back to the fluid and penetrative style of last season. Losing Luis Suarez was a big blow, and replacing him with 2 immobile strikers instead of a more suitable mobile player or use the rapid and mobile Divock Origi (who stayed on loan at Lille) has caused no end of problems for the team in an attacking sense.

Recently, Brendan Rodgers has found a way to fit in his £25m signing Adam Lallana, talismanic figure Coutinho and potential World Class player Raheem Sterling, by using a system of 3-4-3-0, incorporating a back 3 with Emre Can able to stride into midfield and use his excellent ball playing abilities, with raiding full backs Moreno and Manquillo offering the width on the sides.

The often criticized Joe Allen has found a position similar to the one Busquets made his trademark by dropping between centre backs and operating in front of the oppositions midfield, looking for passes into midfield or attack from a deep position, with Henderson playing ahead of him in a position to press or offer short passes to and from Allen to keep play moving.

Liverpools 3-4-3 is designed to place players between the lines and attack the space in front of the back 4. Playing with 3 narrow attackers draws in the back 4 and releases the wing backs to be free on the sides.

The back 3 with Joe Allen dropping in also releases Sakho or Can to move into midfield with the ball and look for passes between the lines.

Liverpool build up; The back 3 with Allen dropping in

Allen floats across the line, often changing sides with Henderson as Allen looks for ways to get onto the ball and between the centrebacks. Henderson will stay between the line of the strikers and midfield, to offer a short pass through the line to then go directly to the final 3rd when possible.

Releasing the wide centre back

As Allen is in a covering position in the back 3, Can can drive into the space in midfield with Manquillo and Lallana available.

The 1st pass will result in the other player receiving next, meaning that finding Lallana from Can would ideally result in Lallana attacking towards the goal rather than making the outside pass that he uses. If the pass is played to Manquillo, Lallana could possibly receive next and face the goal.

Positioning to receive in the attacking zones 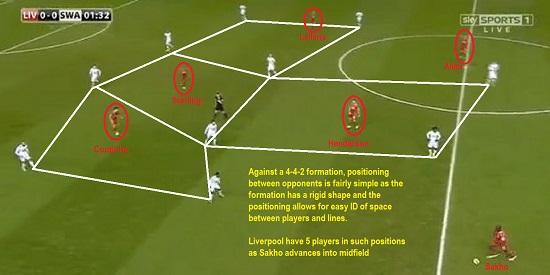 As Sakho advanced with the ball, we can see Liverpool already in the positions stipulated by the coach – between boxes of 4 players. The wingbacks play narrow and free on the side due to the narrow positioning of the attackers between 4 players.
Sakho will always have an easy wide pass available if a central penetrating pass is not available.

As the ball is moved across the field, Lallana is in position to receive between the lines, allowing Manquillo to move higher and receive under no pressure on the side. If Allen wanted to, he could drill a pass into Coutinho and pass to the other side of the defence to Coutinho and force them to re-adjust quickly as the pass would be against the body shape, resulting in a delayed defensive action.

Using the Channel to Draw the Defense Over

Bayern's Move from Fixed to Flexible

Lack of Defensive Cover in the Midfield