After two wins in as many days, the "new" AC Milan failed to pass their first real test of the season at home against Juventus. Facing the Italian triple champions, the Rosseneri realized the gap still existed that separated them from national excellence. As was the case last season, Juve dominated much of this match and eventually prevailed thanks to a great combination of Tevez and Pogba.

Despite their coaching change, Juventus has started this season as they finished the last. Massimiliano Allegri has opted to retain the 3-5-2 of which the team built its success on the national stage. Nevertheless, some familiar faces are absent from this match as Pogba is the only "returner" in the midfield. Vidal and Pirlo are replaced by Pereyra, who arrived from Udinese this summer and Marchisio, respectively.

On the other side with Milan, Filippo Inzaghi must also deal with packages. Defensively, Alex is not there and Montolivo is missing in from the midfield. Rami starts alongside Zapata in central defence, while Menez posts up high, framed by Honda and El Shaarawy.

From the first minute of the match, Juventus took the ball and moved it freely around the midfield. Defensively, Milan waited for their opponent in their own defensive end. Positioned in the centre, Menez was found in the area that Marchisio was attacking, while El-Shaarawy and Honda were locking horns with Lichtsteiner and Asamoah, respectively. In the midfield, Muntari and Poli were facing Pogba and Pereyra. They let De Jong and his supporters control the movement of Tevez and Llorente. 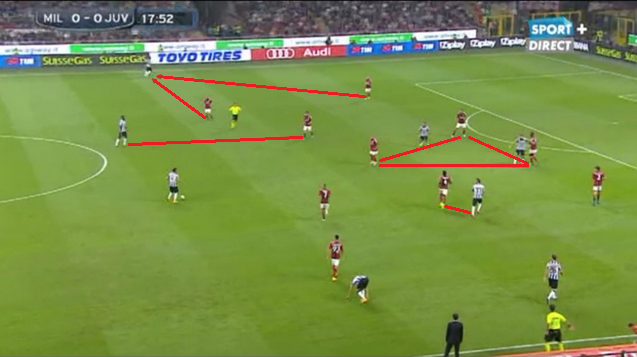 This voluntary waiting game may have saved the Milan defence quite effectively, but it still also condemned them into being pressed by Juventus every time they regained possession. Without support for any of their three front-runners, the Milanese was forced to go out through the ground game if they were to get out of their own half. During the first 20 minutes, Allegri’s men put on enormous pressure. In turn, Pereyra and Pogba came out of the midfield to support Tevez and Llorente to force three vs. three against Rami, Zapata and De Jong.

These advances were particularly permitted by the cover Marchisio provided. Unlike Pirlo, who needs support in midfield to win the ball, this Italian has evolved as a true sentinel, able to be effective in one-against-one situations as well as pressing and to accompany his attackers. He was also supported at the sides by Asamoah and Lichtsteiner. 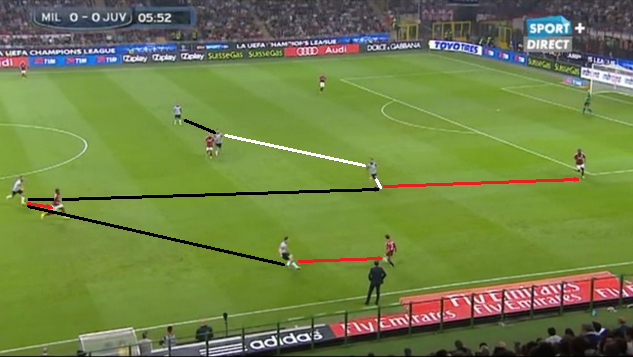 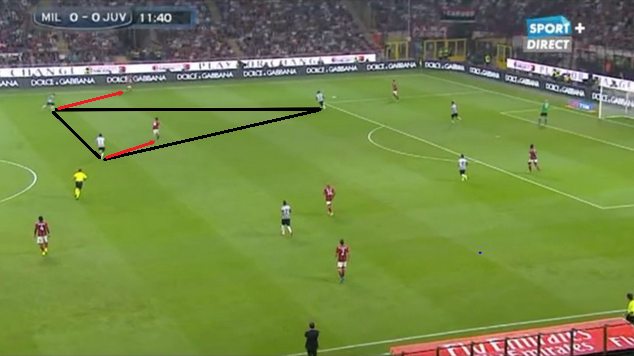 The only player capable of alleviating the Milanese issues, Jeremy Menez, was often retracted into the midfield in an attempt to create and "break” out in transition. Uncomfortable when he stayed in contact with defenders, he was the target of most of the balls played out by his team early in the match. As time passed, the Frenchman found himself in the heart of the movie as Milan pushed forward into Juventus’ camp. His positioning in the midfield allowed the freedom to release Muntari or Poli, which then sent play out wide to El-Shaarawy or Honda.

However, these phases of possession were rare for Milan. For most of the match, Filippo Inzaghi seemed content to defend and hope for an opportunity to counter. Again, relying on the ability of Menez to take advantage of any opportunities to break out. 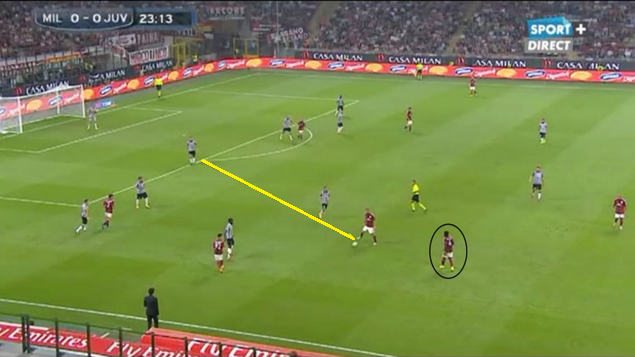 Juventus had to find the key that would unlock Milan

Even though they dominated possession and field position, Juve only tallied one goal to show for it. They needed to find the right formula to unlock the very tight defensive block that was Milan. Being that they were not facing any real attacking threat, Bonucci, Chiellini and Marchisio were free to move and get more involved in the attack. Yet, they found difficulties the last 30 meters as the Rossoneri were blocking all options open to them and were relying on De Jong to hold down the midfield and relieve pressure whenever possible.

Out wide, El-Shaarawy and Honda would provide assistance close to the touchlines while facing Lichtsteiner and Asamoah, respectively. Poli and Muntari track the incursions of Pogba and Pereyra when they tried to offer up solutions to their side. Overall, Juvenentus had Milan pretty much under control.

However, the man who held the key to the lock was named Carlos Tevez. Every time he came down the pitch, he "unlocked" the redundant AC Milan front of De Jong, Poli and Muntari with the assistance of Pereyra and Pogba. The only drawback was that Juve automatically lost a fulcrum in dealing with the Milan defence as Llorente was left all alone up front. Yet, Marchisio, who brought an extra presence to watch for the Milan defence, did not attempt to infiltrate the area so as not to unbalance the team.

…It was the ill-fated tactical decision of Milan to sit-back combined with the brilliance of Carlos Tevez that is How The Match Was Won!