Running with the Ball

Everyone does dribbling exercises but you don't see many coaches teaching their players to run with the ball. It might seem like this doesn't have to be 'taught', players will just do it on their own. But their is a when, where and how to running with the ball.

This is an example of a session on running with the ball that was presented by John Shiels who was a coach with the  Manchester United Soccer Soccer. The session is part of our two book set, 'Technical and Tactical Practices of the Pros' 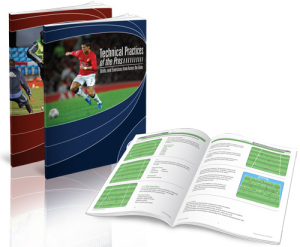 Running with the Ball

Play 5 v 2 with the objective of keeping possession.

Pass the ball around and look for good movement off the ball and good communication.

Can you split the defenders and pass through the middle, so taking out two players with one pass?

Can you run the ball through the defenders?

Emphasize points of either passing through defenders, or by your movement, encouraging defenders to come close to create space.

Play two 5 v 2 games of keep-away. Organize the players to make X amount of passes. Once achieved, one player can run the ball across the middle area into zone B and start again.

Work as a team to get players to escape zone A.

Escape players need to ensure they carry the ball at speed and be composed to make the right decision when entering zone B.

Now introduce phase of play game. Play open game waiting for the ball to be fed into GK from wide player A. As the ball is caught by GK, midfield players move to clear area in front of the defense

Defenders spread the width of the field, with wide players prepared to receive, central players also ready to receive. As the ball comes from the GK’s left, they should bring the right back into action utilizing the entire width of the pitch.

The worst case scenario would be 4 v 3, but normally be 4 v 2. Fullbacks look to run the ball into space provided by midfield pushing on. Run with speed and keep head up as practiced in technique and skill sessions.

Coaching Points
• Work on running with the ball; teammates creating space for their own players
• Let players play and get the right attitude to run the ball into space
• Utilizing good technique – ball out of feet, balanced body, at speed, head up, awareness of options
• Let players gain confidence then talk about decision making when, where, how, why
• Keep asking open questions to assist the players’ understanding of the situation and develop their skill