Dribbling with Quick Changes of Direction

This week we will focus on quick changes of direction within a fast paced, competitive exercise. I will use the ‘drag-back’ turn as the example throughout the exercise, but any other turn involving a full change of direction can be used (e.g. Cruyff turn, step-over, inside/outside cuts etc).

For this exercise you only need a few cones. The example in the diagram is set up for just two players, but you can add in more ‘lanes’ of cones to involve as many players as you need to accommodate. 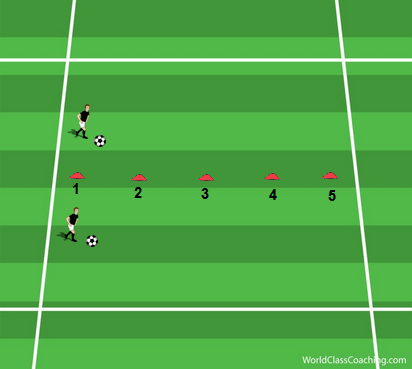 Here we have five cones laid out approximately 5 yards apart from each other. Two players begin each with a ball a few yards either side of Cone number 1. On the coaches signal the players accelerate with the ball towards cone 2, perform a drag-back turn and check back to cone 1. The players again perform the drag-back turn and accelerate to cone 3. The players then perform the turn and check back to cone 2. The players repeat this once more, accelerating forward this time to cone 4, performing the turn, checking to cone 3 before turning again and sprinting over the ‘finishing line’ at cone 5.

As you can see there are many turns required in the exercise and it may be a good idea to ‘warm-up’ to the exercise - I’d do one or two practice runs to focus on the technique of the turn itself. After the players are performing the turns consistently, I would pair them as shown above and they would compete against each other to see who can complete the course the fastest.

The direction of movement with turns is shown through to ‘Cone 4’ below:

The conditioning aspect of this game comes when the players are competing versus each other. By adding competition, the players push themselves harder and in turn will develop the turning technique at a more game-realistic speed. They will also be accelerating as fast as possible in between each turn to give themselves the best chance of winning. Again, by putting your players in a situation where they have to push themselves in order to win against their teammates in practice exercises, you will get the best results in time for game day.