Set Up: (20-30 yds by 10 yds per group) You'll need 6 to 24 cones, depending on the number of players you have and how many you want in a each group so they can maximize the number of touches they get. See the diagram below for how you set up the cones.

The initial 5 cones are 2 to 5 feet apart (depending on player age and skill level). The 6th cones is 5 to 8 yards beyond the 5th cone. Every player in line has their own ball. 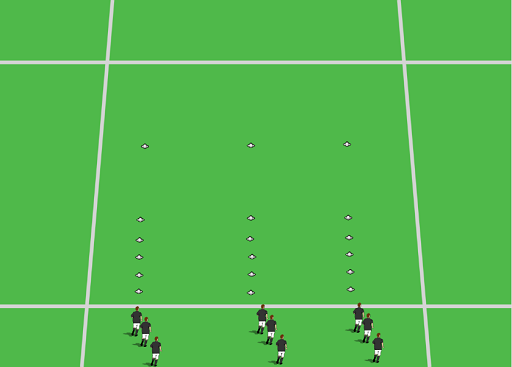 The focus is good control, with quick, soft touches at speed, utilizing the inside and outside of both feet.

After the 5th cone they use a quick acceleration, pushing the ball a little further ahead of them, but under control enough to make the sharp turn at the final cone. 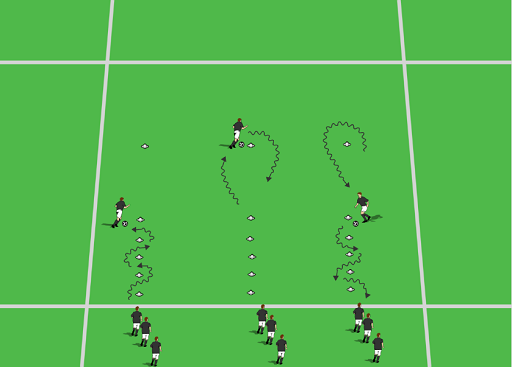 It's important to focus on the following with regard to all foot skill drills.

Technique (Footwork) - Players must be able to dribble with both feet, while making short, sharp touches on the ball. The ball can not be allowed to get away from them or they will lose control.

Technique (Vision) – Does the player have the ability to get their head up and see what's around them or do they just focus on the next cone? Sometimes you can let them know that you will be holding up fingers and they will need to tell you how many, while they are performing the drill.

Positive Attitude and Confidence – It's very important to be supportive of your players and encourage them when it comes to their dribbling. Most players take way too big a touch and always want to use speed to basically pass to themselves (especially at younger ages) and use their speed. It's important that they become confident with the ball at their feet. It doesn't matter how good they become at one touch passing, if they can't have the ball at their feet, they will not be successful at the game of soccer.

Progressions and Variations:
There are many ways to progress this drill. How many, and which ones, you use will depend on the age and skill level of your players, as well as how much time you will spend on this drill. I recommend doing this drill for no more than 10 to 15 minutes. You can break up the variations amongst different practices.

To get more touches for everyone and allow for a change in dribbling pace, have the dribbler, once they are around the final cone, to speed dribble back to the start (to the side of the cones. This way, the next player can start after the person ahead of them goes through a few cones and you can allow all players to be dribbling almost continuously.

The next progression is to turn this competitive. While we must spend time utilizing some drills to develop technique, it's not what our players signed up for. If you want to get the most out of them, find a way to make almost anything you do competitive in nature. It will help to accelerate the development of your players.

That means, turn this into a relay race. Before the next player can go, the one dribbling must stop their ball next to that player, and then they slap hands.

It is easiest to have no rules in terms of touches but if you have enough coaches to keep an eye on the players (the most competitve get creative about cheating!), you can use rules like left foot or inside of foot only, as mentioned above..

In order to maximize touches, better to keep the teams small and have each player go two or three times per relay race.

Now let's add another layer of competitivness, while also adding another technique, accurate passing and finishing. As you'll see in the diagram below, add small goals about 10 to 15 yards after the final (6th cone). 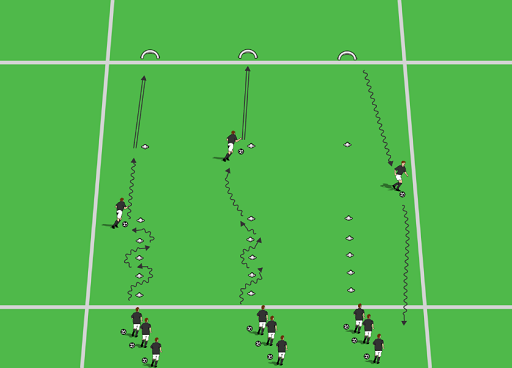 Here's how this variation works. The players dribble through the 5 cones and then they must shoot/pass into the small goal from beyond the final (6th) cone. As soon as they shoot, the teammate behind them can go. Miss or make, they grab their ball and hustle to the back of the line. First team to a set score wins, whether that's 5, 10 or 15.

You can also add a simple condition on the finish, sush as left foot or right foot. If your players are at a higher skill level you could even do outside of a foot (and move the goal closer if necessary, to 5 or 8 yards).

Finally, we are going to add one more progression in terms of competitiveness and that's adding an actual defender. 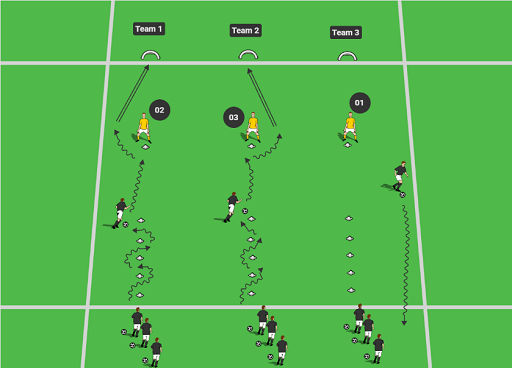 As you can see in diagram 4, utilzing 3 teams (you may have more or fewer depending on space available and number of players). Try and keep it to 3 to 5 players per team if possible.

This is the same as diagram 3 but there are two slight changes. The big change is now there is a defender waiting at th 6th cone. As you can see in the diagram the defenders are from the other teams. A player from team 2 is defending against team 1 and so on.

The defender is triggered to play when the dribbler gets through the cones. The dribbler then attacks 1v1 and tries to score in the goal. Once the ball goes out of play or a shot is taken, you reset. The player that just played offense now becomes a defender against another team.

In this drill, with a quick reset after each attempt, it's not a race to a number. Instead, allow each player to go 3 times and the team with the most goals wins. To add another layer of competitiveness and get the defenders working hard, you could also keep track of defensive stops and then add the two numbers together for a total score.

For example, if a team scores 4 times and makes 8 stops they get 12 points.

The coaching points from previous variations apply. The big change is the 1v1 attack. Most players, especially younger ones, try to self pass around defenders and beat them to the ball. There is no space for that in this drill. The coaches should really focus on helping the players learn that they don't need to completely get around a player when in goal scoring range. They just need to slightly unbalance them to create a shooting angle around them.

This means a focus on quick touches and moves like a simple lunge fake, step over or scissors to send a defender slightly offbalance in one direction so the player can take a quick touch the other way and finish.

Most players, when learning moves like above will do a combination of three things. They practically come to a stop when they are going to make the move, such as a scissor. Encourage them to keep their speed dribble. They don't need to slow down to performa lunk fake or scissors.

Another common problem is they make the move too late. They get way too close to the defender before making the move. One way to work on this is to have coaches stand in the middle as defenders. Don't actively defend, but if they get so close to you that you can stick your foot out to knock the ball away witout moving, do it. This will help them learn proper distancing when it comes to these moves.

Give these a shot. You'll be surprised what the competitive variations do to the intensity level of your players during a simple, boring cone dribbling drill.