This week we have an exercise which will work close control, changes of pace, protecting the ball and plenty of skills and trickery. The exercise can be used as a fun game after a warm up or as the technical part of your session as you can focus on many different aspects of the game in this situation.

Set Up and Directions
Players will work in pairs, with one ball between two. The exercise is set up in a 20x20 yard area with small, 1 yard gates scattered around the area.

Through the diagrams, I will show the exercise running with just one pair of players but I would often use around four or five pairs working at any one time. 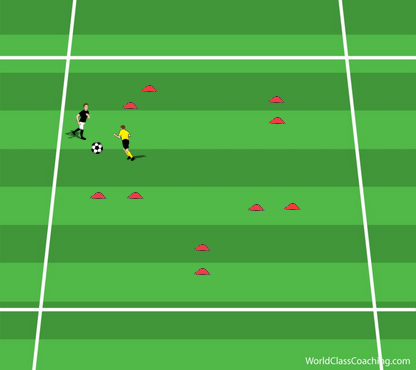 When play begins, the two players will compete one versus one to score as many points as possible within the time limit. The players score points by dribbling through a gate. 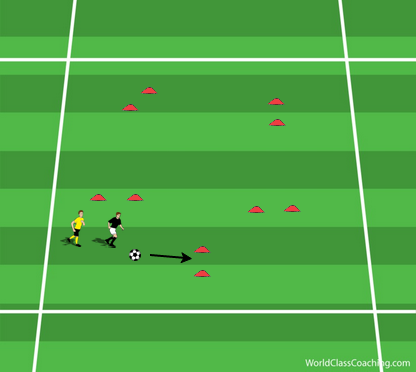 Players must use skills, tricks, feints as well as being able to protect the ball well in order to score more points than their opponents.

If the ball goes out of bounds, play is turned over and the opponent is allowed to dribble back in. Play is continuous, so if the player that begins as the defender steals the ball, then the roles are reversed and he is now the attacker and tries to dribble through the gates.

Try to encourage the players to keep a very high tempo throughout.

I run the exercise for one minute at a time.

Split the team in half, have half of them compete in pairs while the other half rest – then switch every minute. This helps to keep a high intensity.

1 – All players perform 1v1 at the same time. This allows for a shorter rest period in between each 1 minute set.

2 – Timing can be adjusted depending on the age group.