This week we have a very high tempo, quick-fire 1v1 exercise that is worked in groups of three. It is always good to practice 1v1s they happen all over the field in every single game. 1v1s also get players thinking from both the attacking and defensive side of the game. A good warm up should be performed before this exercise as it is played at a very high tempo.

Set Up and Directions
The exercise is set up as shown below. The feeder ( player in blue on the outside of the field) must have a number of soccer balls available in order to keep a high tempo for this game. The two active players wait centrally in the 20x15 yard field marked out with two goals, one at either end. 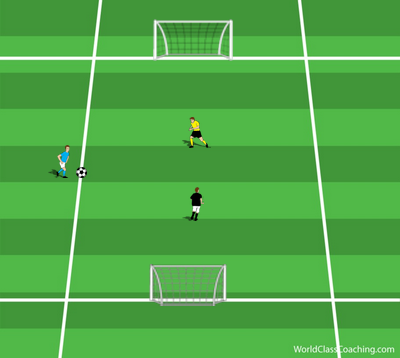 Play begins with the feeder playing a pass directly between the two competing players. The two players then compete for possession. The player that wins possession must try to dribble away from their opponent in order to create enough space to take a shot and score on either goal.

Shooting towards both goals helps encourage awareness of surroundings and individual creativity e.g. faking towards one goal, causing the defender to move, and then turning back towards the opposite goal.

As there is lots of opportunity to score here, we play seven rounds with the same two players in the middle. 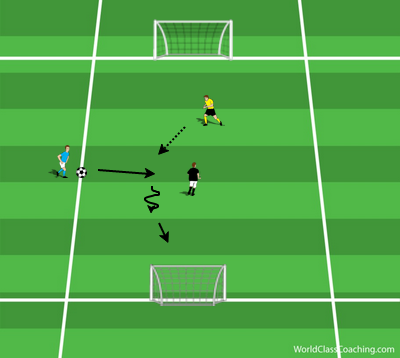 As soon as one ball goes out of bounds OR in the goal, the feeder plays the next ball directly between wherever the two competing players are on the field at that time. 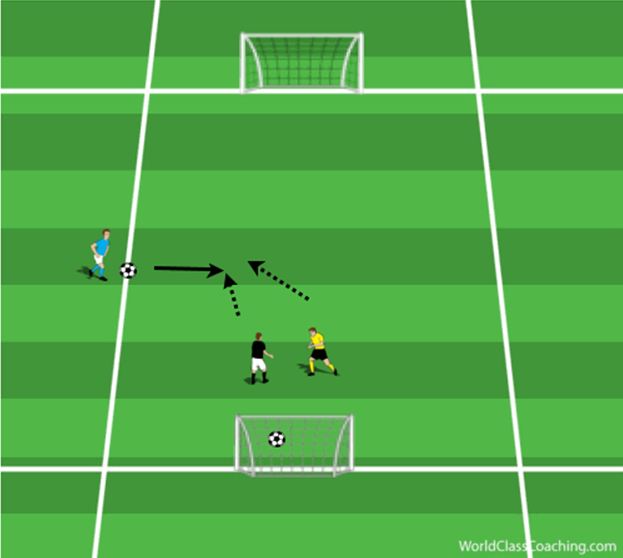 This allows very little rest-bite for the players and keeps a very high tempo.

After seven round of play, you should have a winner…if not, then you can play one more ‘tiebreaker’ round. The winner stays on and the losing player now becomes the feeder.

Be sure to reset the soccer balls each time you change feeders so that the new feeder can help keep a flow of passes into the area.

Timing
The timing of the exercise can be varied depending on the conditioning level of your players and by using some of the variations shown below. The players should be encouraged to work at a high tempo throughout.

Variations
Feeder– throw the ball in high every time OR play a pass to the opposite side of the field to where the two players are.

Direction – play with a goal to defend and a goal to attack for each player, this is more game realistic and adds more of a defensive element to the game also.

Number of players – you could add a second player for each team and play 2v2 to goal.