One of the biggest challenges when coaching young players is getting them to stay in position. Time and again, you see them charging for the ball, before huddling around it in a clumsy effort to get a kick. Even senior players can succumb to over enthusiasm, creating huge gaps for the opposition to exploit and break through on goal.

Coaching Team Shape in the 4-2-3-1 provides a grid based training system that solves this problem. Firstly, it introduces your players to the key principles of keeping team shape before providing a progressive series of drills that improve their understanding of what they need to do, where they need to be and why. The result is that they stay in position and passing, possession and performance all improves. 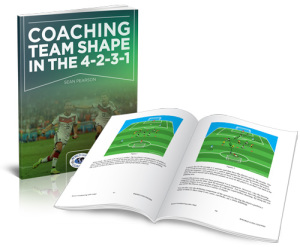 Here's an excerpt fromm the book that talks about the second phase of training when pressure is added.

Step 1 – Cones
Passive pressure is adding pressure to a situation to simulate an action that may occur in a game, but is controlled to allow for success and to give players a better understanding of the task. Put a cone down in-between grids that divide the sections of defense, midfield and offense (Fig.2.1a). When you feel your team is able to pass around these cones you can then place a cone in-between every grid line to test the movement of your players further. This increases the difficulty as well as forces your players to move into areas to receive the ball.

The cones represent the opposition and the key is not to pass the ball over the cones. This promotes increased movement off the ball as players have to move to get a clear line of sight of the ball, by doing this they also create good angles of support (Fig.2.1a). This also helps the players to become more aware of the opposition and begin to understand more about spatial awareness. Now there is more implication on a player’s position, whilst also being aware of the ball’s location.

Achieving good movement will give the best chance of maintaining possession and moving the ball away from pressure. This is best for beginners and allows your players time to control the ball without a defender rushing at them.

This type of passive pressure is also perfect if you want to work on shape but only have limited numbers for practice, it is a type of shadow play, which allows players to kinesthetically run through movement patterns so they become more confident and aware of them. This will help when they see the scenarios during a game. 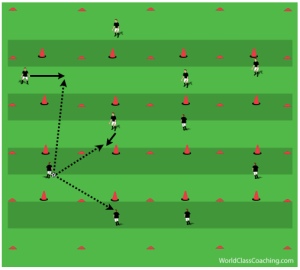 If you wish you can move straight onto this step. At first players are acting passively. Take away the defending cones and have 3-5 opposition players, one in the striker’s section two in the midfielder’s section and one or two in the defender’s section (Fig.2.2a). If you still have players left over, restrict defending players to just 2 grids. This is to stop defenders from pressuring a player 2 v 1 in a grid and allows players more time and space to make decisions. The defenders’ job is to chase down the ball to block paths without tackling, however they can intercept passes. The team must continue to move off the ball to create angles of support quickly so the player on the ball can make a quick decision to release the ball, see below. 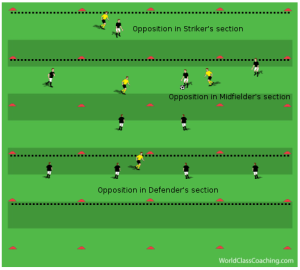 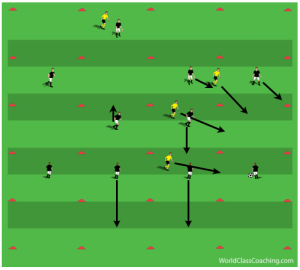 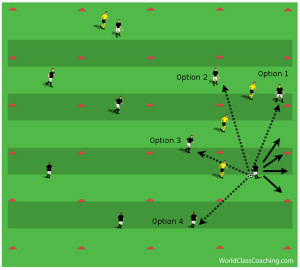 This is just a very small part of book that will show you how to progressively train your team to understand and implement the 4-2-3-1. This is valuable information even if your team doesn't play with this formation because the principles of, 'Grid Training' can be applied to any team shape that works best for your team. It will help teach your players how to move and play better as a team.