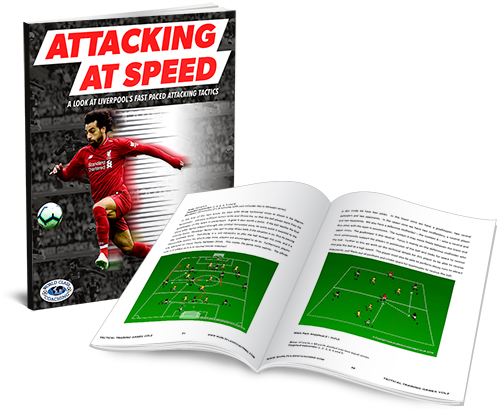 Klopp's team applied medium pressure in this match, in contrast to the first one, when the high pressure was continued during the main part of the first half; Man City had the opportunity to build up from the back easily.

Liverpool's forwards (Manè, Firmino and Salah) only tried to close the passing lanes toward the middle third without countering Ederson or the players in possession through 1 v 1 duels. Milner played 1 v 1 against Bernardo Silva in the first match, until he had to be substituted; in this picture it's clear how his task was to cover the space around him rather then to press the direct opponent.

Liverpool pressed higher but not as strongly as usual, when City moves started from the goalkeeper and very close to their own goal. A 3 v 3 situation on the ball is clear, but the reds seemed not being on time to press the receiver, while controlling the ball, and they could just force the direction of play toward the fullback on the flank (Danilo 3).

Despite the huge amount of moves that were built up from the back in the first leg, the high pressure of Man City (especially during the first part of the game) forced Liverpool to play long balls; this solution was probably thought by Klopp for this match, but many of them were anyway the answer to a very strong pressure inside Liverpool's first third.

In this example, all the short passing lanes in front of Allison were closed and the potential receiver could be easily countered; the only free player was Van Dijk, but the pass was risky because of the pressure of Aguero, who could have intercepted the ball. 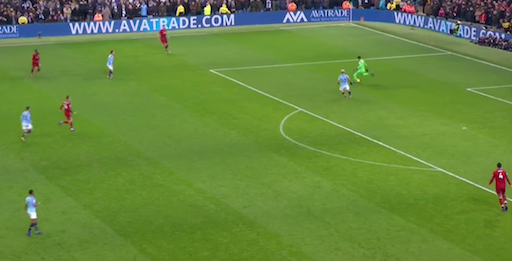 Liverpool faced troubles also during the finishing phase, as City defense and midfield lines were very compact inside the first third, to answer to the overload of the center final third of Liverpool and to avoid the opposition forwards from dropping deep; the only movement conceded was to drop back, as Manè was doing in this example.

Many deeper playing attempts were easily covered and the receiver was then double marked, as Salah against Stone and Fernandinho in this picture. 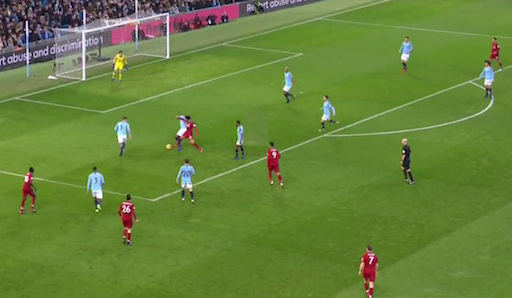 Liverpool caused problems to Manchester City defense by placing Salah and Manè between the center back and the fullback of each side of the back four, when the high pressure could be overcome through the obliged long balls at the back of the opposition defenders. 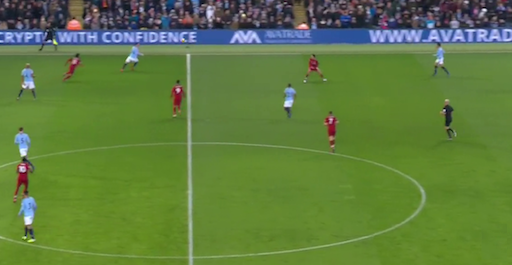 The opposition depth could be exploited even when the pressure of Guardiola's team was not properly connected among the sectors and players and when the defense line didn't progress up properly. 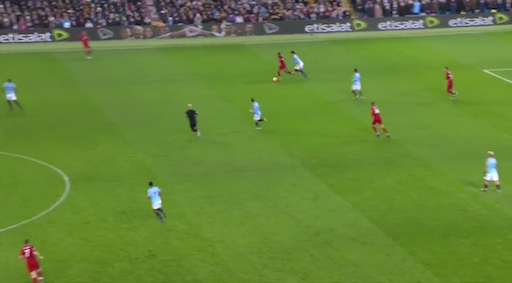 This sequence is very explicative of this matter: the pressure actions were not properly followed by Man City back four and Salah was able to receive freely after dropping back. 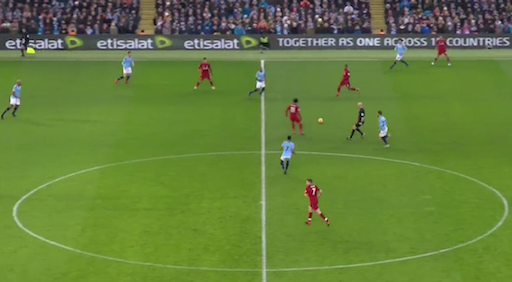 He was under pressure when he was already prepared to turn and dribble up; Bernardo Silva is on a bit late to counter him.

The distance between the midfield sector and the defense line allowed Salah to dribble the ball forward and Manè to attack the depth. 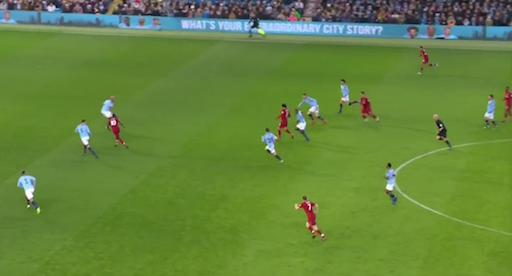 Manè could then receive in behind facing the opposition goal...

...and only the pole prevented Liverpool from leading 1 - 0 in the first half. 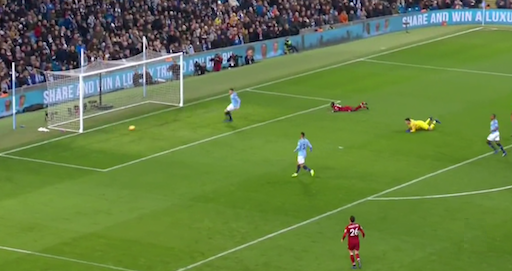 This another example of what we are talking about, but after a quick transition to attack that started into Liverpool's first third. Henderson won the ball here and he passed to Firmino; the defenders, leaving space for a transition to attack, did not follow the high pressure of City forwards and midfielders properly.

Firmino could play toward Mane and behind the two first lines of the opposition...

...and he could exploit the space between the back three and the opposition midfielders; City defenders could only cover the depth, allowing Manè create a counter attack situation. Salah was able to attack the defense line at the back of the further defender.

Here again, the pressure lines were overcome and Salah could face the opposition goal while Manè was receiving; all the City players are on late and faraway from the opponents. 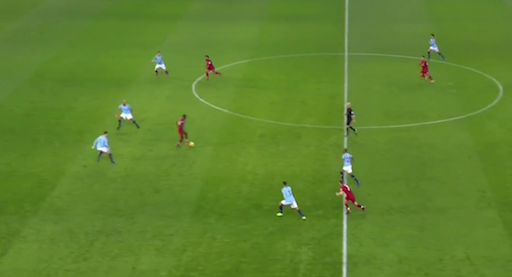 The defense line wasn't compact and Firmino could play in behind Sanè on the right and Salah could stretch the line toward the goal. 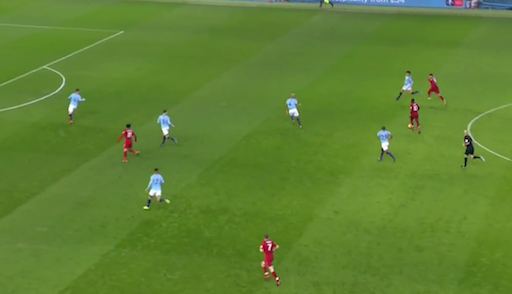 Even if Man City could rebuild the defense line inside the box, the right fullback Arnolds could play a cross pass easily and a 4 v 4 duel was created inside the box. 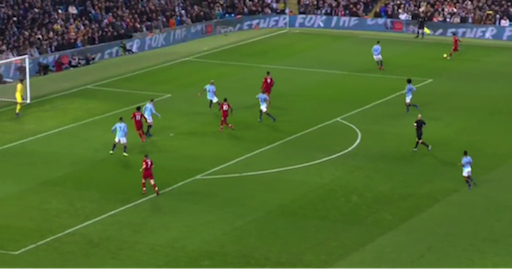 Liverpool’s three forwards are usually very close, to make the defense narrow to cover the half spaces between the center backs and the fullbacks. The main idea when in possession was to overload the center to leave spaces for the fullbacks to push up and create a line of 5 inside the final third.

The momentary draw goal that was scored by Liverpool was the result of double pivot tactics in the second half. The attacking benefit of Fabinho substitution and formation change was Liverpool’s ability to get both the fullbacks up into attacking positions during the build up and possession phases. Fabinho and Henderson are sitting in the double pivot positions, allowing support. 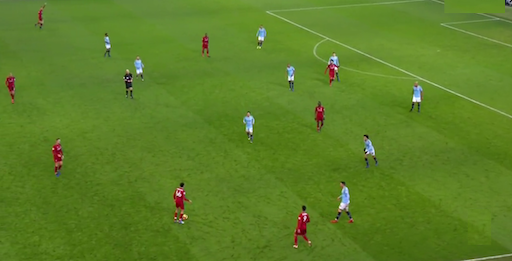 Wijnaldum made run inside toward the center backs and this movement cleared space for Trent Alexander-Arnold to play a long diagonal pass to the opposite fullback Andrew Robertson on the left side of the attacking third.

Robertson received and quickly switches the ball through the double pivot of Fabinho and Henderson back to Alexander-Arnold, moving the whole defensive block of Manchester City. 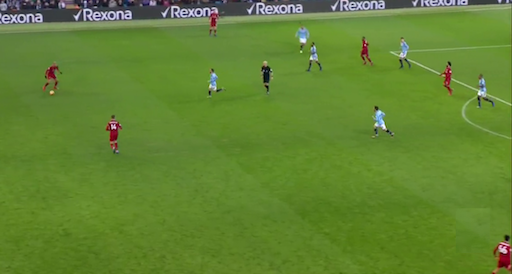 Sanè defense mistake is evident as he didn’t press the opponent while receiving and he didn’t try to force the direction of play out, falling into the trap of a fake cross pass and leaving the center of the box and the goal spaces clear for Liverpool's fullback. The same kind of prior diagonal long pass could be really played at this point. 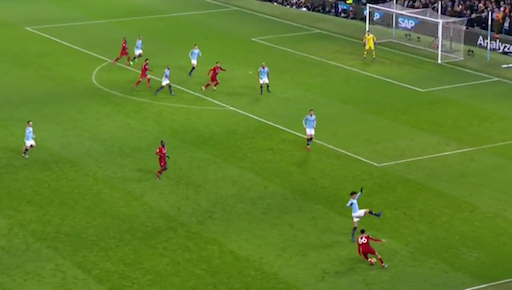 Liverpool immediately executed the prior same movement also, with Wijnaldrum making a deeper run inside the 18y box to create space for the long diagonal ball over the top from Alexander-Arnold to Robertson, overloading the center and creating space again along the left side of the attacking third. 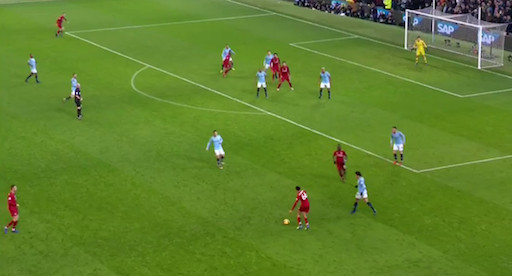 While Robertson was receiving on the left side of the 6y box, a 4 v 4 duel can be noticed; the center overload of Liverpool forwards and Wijnaldrum deep runs stretched the defensive block of the opposition; the back line of Manchester City was divided from the midfield line and the defender were forced toward their own goal being on late and out of position. 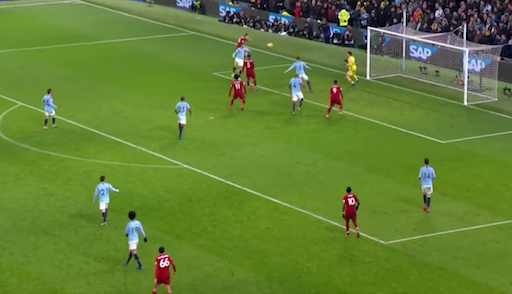 Robertson could touch the ball for Firmino at the back of the group of players around the ball, to allow him to score easily, as no one could mark Firmino from the goal side. 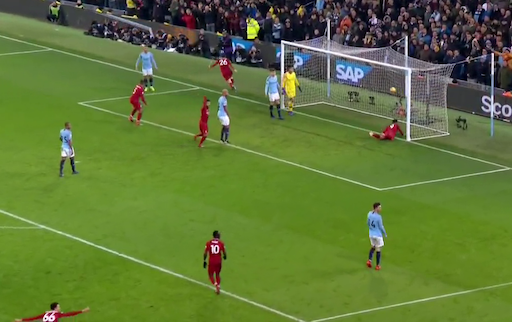 Attacking at Speed - Part One