Set Up: Size (45 x 35 depending on age, skill level, etc. – can be brought down as far as 30 x 25) Depending on your technical and tactical focus as well as equipment available this can be played with small goals or full size with goalies.

See diagram 1 below for the set up of each “team.” Each team goes for either a set number of rounds, like 10, or a set time period, like 6 minutes before switching. Keep score and give the losers something to do. 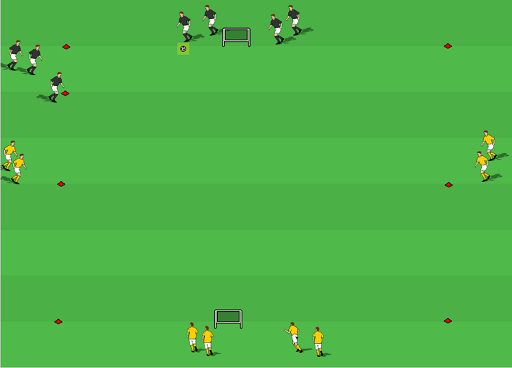 After the initial pass and overlap, it proceeds as a normal 3v2 to goal.

If the defenders win the ball (or the goalie makes a save if you are playing with goalies), yellow can immediately counter by playing wide to player 4 or player 7 in a 4v3 counterattack.

All lines for both teams should rotate after each round, even if yellow doesn’t win the ball and counter. So even though players 4 and 7 may not be involved in a round .they should still move to the next line. If they don’t they could get stuck doing nothing for awhile if the defense doesn’t win the ball often. Keep the players moving and playing!

Diagram’s 3 and 4 are the continuation of a successful attack by the black team.

In diagram 3, the wide player continues to dribble into the middle of the field and plays wide to player 3. After the overplap, player 1 continues a diagonal run across the field, giving player 2 an option to play a pass down the line. Diagram 4 shows the finish. 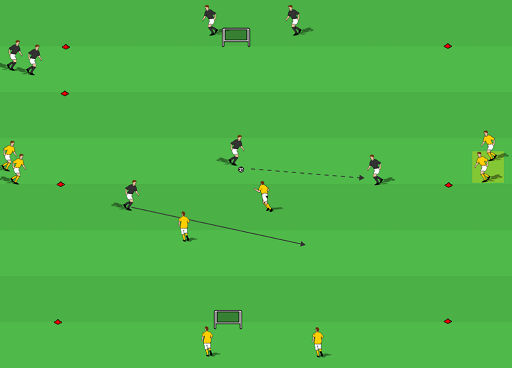 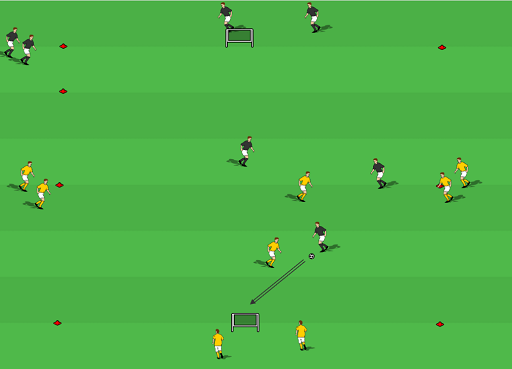 In diagram 5, you see the transition to the 4v3. A yellow defender intercepts a pass and passes out wide, bringing the wide player on the other side into the game as well. Black now needs to quickly get organized and transition back behind the ball to stop the 4v3 counterattack. 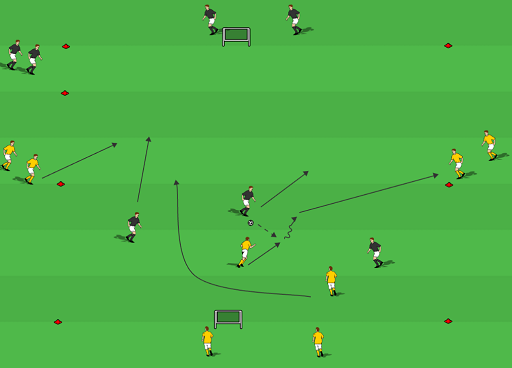 Coaching Points:
• Taking advantage of numbers up with speed of play via quick passing and runs off the ball.
• Counterattacking ability
• Timing of runs
• Variety of runs. It shouldn’t always be vertical runs up the field. This is why the drill starts with a mandatory dribble in to the center from wide and an overlap.
• Challenging players 1v1. Numbers up in a 3v2 should give players space and opportunity to challenge 1v1.
• Good decision making
• Defending numbers down
• Quickly getting organized and back as a defense when you lose the ball in the 3v2
• Closing people down
• Cutting off angles
• Communication
• Timing, vision, awareness, anticipation, speed of play and accuracy and weight of the pass are extremely important.

Progressions / Variations
Depending on your focus, as well as the team’s skill level and age, you can regress this drill and make it a 2v1 with a 3v2 transition. Just eliminate one of the two lines (one per team) next to the goals. For less experienced, skilled or younger teams, this can make things easier by reducing the number of options available so they aren’t overwhelmed by the decision making process.

To encourage speed of play and make it more difficult, set a time limit for the attacking team such a 6 or 10 seconds.

Another progresion is to make all finishes one touch.

If you want to encourage 1v1 play, then maybe a player needs at least three touches before shooting.

Many younger players struggle with varying their runs and have a tendancy to go straight up and down the field. Starting with an overlap and a wide player dribbling inside is designed to teach other options. By doing so at the beginning of a competitive drill, you can get technical and tactical work unopposed but at game speed.

You can start the drill with any number of different pass and run combinations. Maybe player 1 plays a lateral ball to player 3 while player 2 makes a diagonal run to receive from 3 while player 1 overplaps player 2.

Maybe player 1 just plays a quick give and go with player 2. This is a good way to use patterns of play within a game, at game speed but without real defensive pressure.

A bigger field will give them more room to be successful and will also double as a conditioning game. If you make the field narrower, quick, accurate combination play becomes more important.

Gregg Gillies is a nationally licensed coach through the USSF and is a Youth Athlete Development Specialist and Head Coach at Mount Laurel United Soccer Club, where he currently coaches a u14 girls team, the MLU Raptors. He also is the owner of www.NoLimitsSoccerTraining.com, where his focus is on maximizing a player’s individual technical skills, soccer IQ, and overall athletic development.

2v1 and 3v2 Attacking and Defending