The Order Game - An Effective Way to Start Any Session

This week’s exercise can be used as a multi-purpose exercise. It is a very fun game that will get your players pushing themselves to the limit. It is also a very effective way to start a session as a warm up as it has very positive effects on team communication as well as getting them thinking and using their ‘soccer brains’ from the start of the session.

Set Up and Directions
The exercise is set up as shown below. 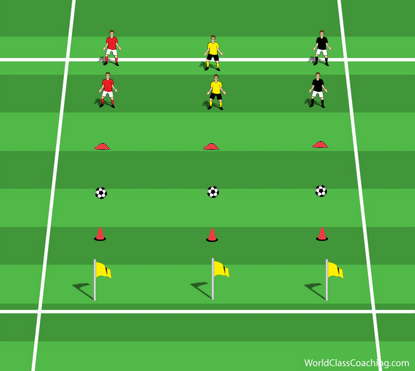 Above, we have 3 teams of 2 players ready to compete against one another. Each team has 4 objects in front of them (in this case, a small cone, a ball, a tall cone and a flag) spaced approximately 5 yards from each other. This is a speed and agility exercise which involves quick thinking from the active player as well as good communication from his teammate.
The coach calls out the objects in a ‘new’ order. E.g “Ball, Flag, Small Cone, Tall Cone”. The front player in each team then moves as quickly as possible to re-position the cones into the correct spots. The first team finished, with all of the objects in the correct order, is the winning team! 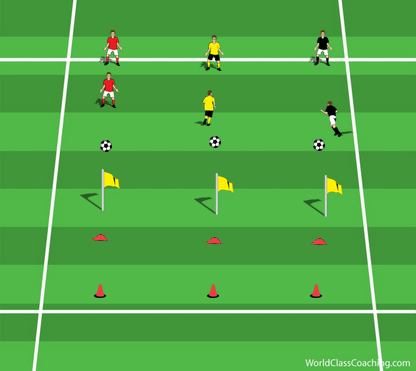 Above we show the players returning to their lines after re-ordering their objects.

Timing
By using the variations below you can repeat the exercise numerous times in various ways.

1 – Say the objects/cones in reverse order
2 – ‘Tag-Team Style’. The players take it in turns to move one cone at a time. E.g. The first player in the line sprints out, places the ‘orange’ cone where they would like, returns as quick as possible to his line, tags the next player, who sprints out to move another cone into place. This is repeated until all cones are in the correct order.

The Importance of Communicating With Field Players

Communicating With Your Players