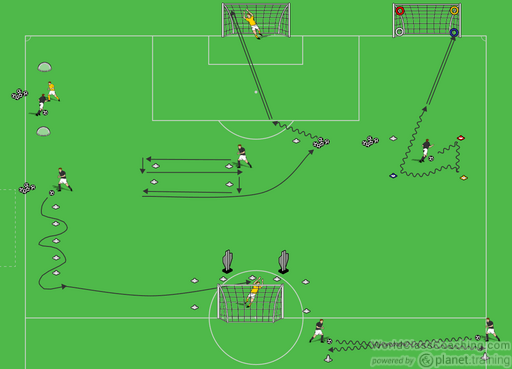 Our club begins the major competitive season in the next 2 to 3 weeks, so we are therefore entering into the pre-season phase of the training year. As you transition from the off to the pre-season, the focus should shift to high-intensity training and developing anaerobic endurance. In addition, more time is needed to focus on match preparation (tactics, team shape, etc.) and less time is devoted to fitness training, so your conditioning exercises need to be as economical as possible.

Today’s exercise is a simple conditioning circuit. It is an exercise that I most frequently use during the pre-season as it is very efficient and demands a high work-rate. Not only does it incorporate agility, acceleration and speed endurance; but the work-to-rest ratio also allows you to develop the anaerobic capacity of your players.

For this exercise, you will need a playing area at least 20 yards long and 30 yards wide. Divide your squad into two equal groups. (The amount of cones and stations you set up will depend on the number of players you have. In this example, we have assumed they are two groups of 5 players each.)

Set up a horizontal row of 6 cones so that each cone is 5 yards apart. This creates 5 channels that are all 5 yards in width. Have each player in one of the groups stand in the middle of each channel so that they are 7 yards behind the row of cones. These players should each have a ball (Figure 1).

Set up another row of 6 cones (each cone 5 yards apart), 7 yards away from the first row so that each cone, except the first, is directly in line with a player standing with a ball. Have the players in the other group line up behind the first cone in the second row as shown below (Figure 1).

When ready, the player at the front of the line will