Our recently released Coaching Team Shape in the 3-3-1 has been getting lots of attention recently, especially for its use of the "grid system" when setting up training sessions.  I have copied an excerpt from the book which is part of the introduction and explains what the grid system is and how it should be set up and used.

The grid system is a coaching aid I developed to improve what I consider to be the number 1 problem in youth soccer, player spacing (shape) on the field. How many times have you watched a youth soccer game where players are huddled round a ball and fight for a kick? A soccer game quickly descends into a frantic display of kick and run. I have created a system that allows anyone, no matter what your level of soccer knowledge, to coach your team how to spread out when playing soccer.

This system is called the Grid System and it increases the efficiency and awareness of how to coach shape within formations. It is a system that breaks down the fundamentals and increases the coach’s and players’ understanding of how to keep the desired shape during play. Simply put, according to the formation (1-3-3-1 or 1-2-3-2 etc.) each player is assigned a grid to play in. Grids are connecting but players have limits as to which grids they are allowed in during any specific play. The grids relate to field positions and stop players bunching whilst allowing them to play in a more structured setting. Using this system, we go through step by step what to do to achieve success, beginning with simple movement patterns through to more advanced tactical choices.

I think it is important to relate everything you do during a training session to a scrimmage, therefore keeping it GAME REALISTIC. Thus terms used in this guide will relate to player and body positions according to the type of play being focused on.

When laying out your grids, each is 10x10 yards in size and each grid connects to another grid (Fig.1). 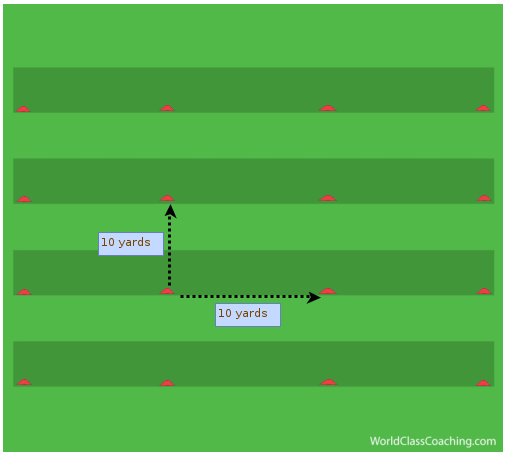 Whichever formation you choose to coach all bearings are the same. The grid directions are taken when attacking. So, facing the opponents goal, the grid line in front of the players is