This post is part of the Introduction for our book, Coaching Spanish Soccer by Jordi Pascual.

“Tiki-taka” is the popular way to describe this possession style used by Spain. The journalist Andrés Montes made the name very popular, and a lot of people think that he was the first one to use it; but this is not true. The term “tiki-taka” was first used by a Spanish Coach called José María Maguregui (known as “Magu”), when he was Manager of RCD Espanyol from Barcelona, during the beginning of the 80s. With that, he gave the name to a style of playing based in keeping the ball and not going so directly to goal.

The important thing here is that the “tiki-taka”, together with the formation 1-4-2-3-1 is used by all Spanish National Teams, from U-16 to the “A” team. Everybody is playing the same way, which makes the players know how it works when following the entire path from U-16, until they arrive to the “A” team. Of course, some players arrive older to the National Team, but it is also obvious that the older they are, the more knowledge of the game they have, so it is not difficult to fit within the team.

As can be seen in the picture, there are 4 Defenders, playing in a Flat-Four, 2 Defensive Midfielders, 3 Attacking Midfielders (1 centred a 1 at each flank) and 1 Centre Forward or Striker.

First of all, let me say that I’m not a fan of “formations”. Formations, for me, is just a number or a name written on a chalkboard or a sheet of paper, and saying where a player will be at the beginning of the match. Also, it says, more or less, where the area of influence will be of that player, that’s all. Roles and responsibilities of players are given by the coach/manager of the team, not by the “position” you have. But that’s another story. 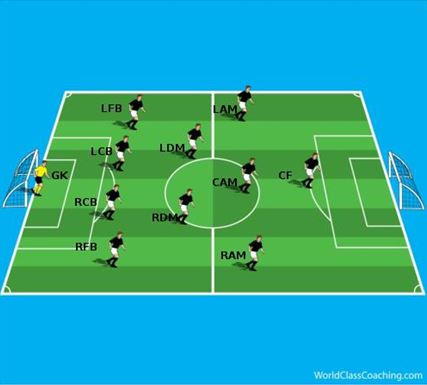 In the Spanish case, the Back Four is a classic from the last years in football. That meanstwo Full-Backs and two Centre-Backs, with none of the last two playing the sweeper/libero role. It depends also who is playing and who is at the front. The most frequent has been Piqué/Puyol, but, in EURO12, Puyol was injured so it was Ramos (normally the Right FB), who played there, while Arbeloa (usually starting on the bench), took the position of Ramos. Alba is now the Left FB (before, Capdevila played there). We’ll go back later with the Defenders.

Two Defensive Midfielders (Alonso and Busquets), one Attacking Midfielder (Xavi), two men on the Flanks (Silva and Iniesta) and one Striker (Torres/Villa) complete the team. Obviously, we can’t forget the Goalkeeper (Casillas), one of the best in the World, we’ll go later into details. The first thing to notice is that the Wingers/Flankers play with their opposite prominent foot, for example, Silva is left footed and plays at the right, while Iniesta is right footed, playing on the left. Why? Simple: as a general rule, the Spanish game is not about crossing from Wingers (in the classical way); it’s about to touch again and again until a gap/space behind defenders is found; then, the ball is immediately placed there for someone (can be also a Full-Back; remember Alba scoring in the final match of EURO12 against Italy) to score or, to make a back pass with 3 or 4 players arriving to face goal. And, the natural movement of Iniesta and Silva is from outside to inside. That’s the reason.

Also, we’ll talk about the “9” (or the “false” nine, as Spain is now using this combination or position which is working so well for FC Barcelona), and the differences between playing with a typical Striker or non-typical striker.

From the book, Coaching Spanish Soccer by Jordi Pascual. 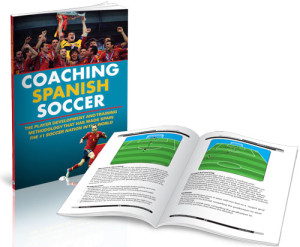