This week's post is an excerpt from our latest book, "Developing the Complete Tactical Player". This unique book focuses on methods to train players to develop tactical knowledge, faster decision making and smarter use of the ball. I think we can all agree that this is an aspect sorely missing in many of our players but can make all the difference in taking them to an elite level.

This brief excerpt looks at the nature of game intelligence. Is it innate or learned? Or some combination of the two.

NATURE OR NURTURE? TO WHAT EXTENT IS INTELLIGENCE TRAINABLE OR INNATE?

The traditional view of intelligence has been a nature view - that it is genetically determined and therefore essentially unchangeable. This view is now challenged. The brain is understood to be a constantly changing, or plastic organ. It responds to experience and learning by reorganizing networks of brain cells or neurons. Because the intelligence required to perform a job, hobby, or sport is shaped by the demands of that activity, much intelligence is experiential and learnable.  Readers may be surprised to know that recent research suggests that even intelligence as measured by IQ is changeable and is not simply a product of our genes. Our brains are too malleable for this to be the case. There is considerable evidence to show that training programs to work on how children reason, think, make decisions, and solve problems, lead to improved IQ. Researchers estimate that 40-50% of variability in general intelligence is accounted for by experience and development. This number would likely be higher for game intelligence since it is an intelligence built predominantly by experience. So when you hear people comment that a player simply has natural understanding of the game, this is a little misleading. Certainly players vary in how much innate understanding they show for the game from their early playing days onwards. But the understanding still comes from experience. In essence we should think of our nature (inherent) providing our potential for game intelligence, and experience providing the means to fulfill that potential. Just like having an excellent cardiovascular system gives you the potential for great endurance, you still need to train to be a good marathon runner.

People’s outlook on the nature of intelligence influences their effort

Evidence suggests that people who consider their intelligence to be a fixed property are less inclined to work hard to improve it5. This suggests that as a trainer or coach, you instill in players the idea that their game intelligence (decision making etc) is trainable and that they should look at errors made as a chance to learn to make improved decisions.

Don’t players just develop game intelligence through practice and playing experience without us specifically training it?

1. Like game intelligence, the demands on strength, power, endurance, speed and agility are also shaped by the game of soccer. Yet, we still perform additional training to help players to reach their potential in these areas. The same applies to game intelligence training. The extra work and specific training that we do above and beyond simply playing the game makes players better.

3. The final reason to assume that game intelligence cannot be developed fully just by playing and practicing the game of soccer is that there are considerable differences in game intelligence among players who have all had similar amounts of playing experience. 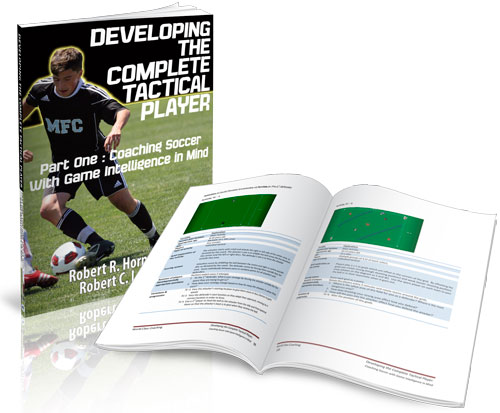 Click on the book above to learn more about developing the complete tactical player. You can order the eBook or hard copy version of the book.