Three zones of equal area divide the field into 3 sections. There is an overload of 3v1 in the defensive zones to start with and 2v2 in the midfield section. 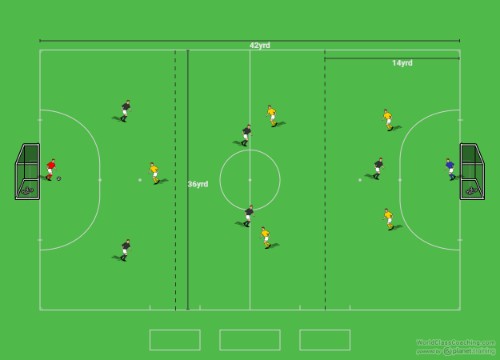 Each section has degree of creativity set upon it. At the back when building possession you want your team to make high percentage decisions. Whether it be passes or bringing the ball forward but with 3v1 you do not want to take any chances. Move the ball until one of the center backs can pass or bring the ball forward out of the area into the midfield area. The other 2 players can’t follow this player into the midfield area.

Now you create a 3v2 but what you try and create is a 2v1. The spare midfielder looks to take one defender away with their movement. 1) The CB then can look to take on the midfielder with speed, especially if the midfielder positions themselves on the inside to allow more space on the outside (note the original position of the other midfielder sitting just behind the CB in case possession is lost). 2) the CB can play a pass into the space with the outside of their foot after drawing the midfielder in close to them. 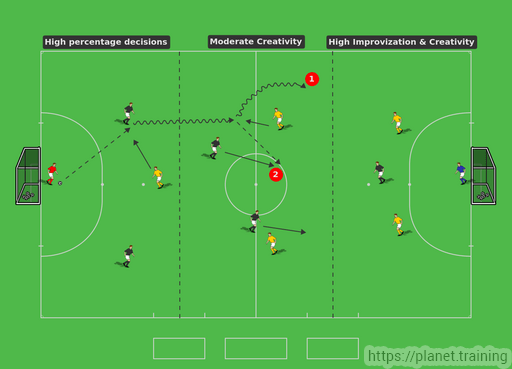 As the ball is brought further forward there should be more encouragement on being creative and improvising but also making fast decisions when doing so. Forward runs will help with getting more players forward and making the defenders unsure of where the ball will go. Below the striker starts deep and makes a run towards the ball, bringing a defender with them. At the same time the two wider players in the middle zone make forward runs. Now the defenders are outnumbered 3v2 and can’t mark everybody. It is important that the striker doesn’t broadcast their intentions by changing their body shape to show their planned passing option. 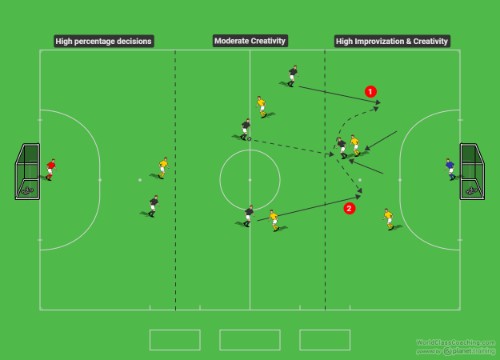 Further options going forward can be:

When in the attacking area and the play breaks down continually encourage improvisation from players, whether it be backheels, no look passes, flicks etc. Because the one thing defenders don’t like is when a team is unpredictable.