When I give goalkeeper training sessions to coaches, many ask about teaching their goalkeepers to deal with break-aways. In the first of a two-part article on the subject, we’ll look at building the goalkeeper’s confidence in blocking and closing down. In the second portion, tips for dealing with the break-away situation in match-like situations will be shared.

It is useful to invert the break-way situation as a teaching model, looking at the final, blocking save as a start point. Young goalkeepers in particular often hesitant to get into the feet of the attacker, though this gives them the best chance to make a save. 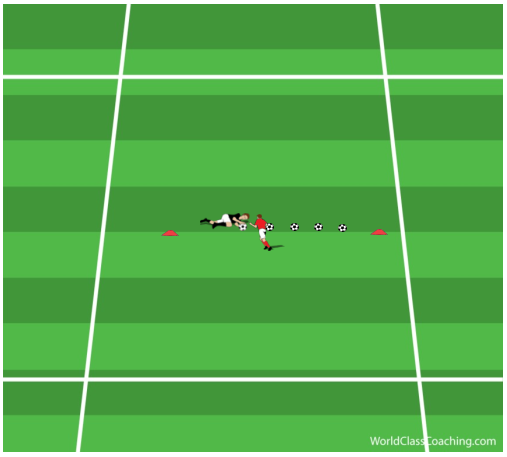 The goalkeeper starts from his feet and works to his left (above), covering each successive ball in the line. In the warm-up phase, the coach steps to each ball and taps at it as the goalkeeper covers, giving light pressure. At this stage, we’re most concerned with the proper technique for covering (landing points – outside of knee, hip, shoulder), stretching the body out behind the ball, holding the ball with proper hand position (bottom hand on back, top hand on top of ball), holding the ball in line with but well in front of the eyes (elbows not locked) and using the top leg to propel and protect oneself. After the exercise is completed in the direction shown, repeat the other way, with the goalkeeper working on his right side.

Close and cover in a grid

The next step is to add movement. To build the goalkeeper’s confidence, work in a grid that is 5 yards wide and 12 yards long. The attacker dribbles toward the goalkeeper, taking a longer touch with his second or third touch and the goalkeeper covers. The goalkeeper’s movement to close down is characterized by a couple longer steps to close the ground and then shorter steps (in case an adjustment is needed) before covering. In this way, the goalkeeper becomes accustomed to reading touches and being aggressive in this situation. 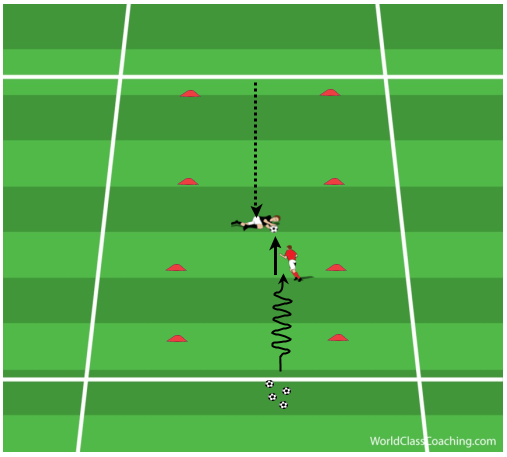