Among the more challenging tactical teaching topics for goalkeepers is helping them to control their area. There are numerous moments in the game when the goalkeeper’s ability or inability to eat up loose balls in the area can swing control of the game to one team or another. Crosses, through-balls and balls that fall loose to the ground in the area when the opponent is attacking all present challenges, as do back-passes when the ‘keeper’s own team is in possession. In article #1, key teaching cues for teaching the goalkeeper to deal with crosses were discussed. This article will take a look at the importance of through-balls and back-passes for the goalkeeper and the back line.

Technical Training for Dealing with Back-Passes 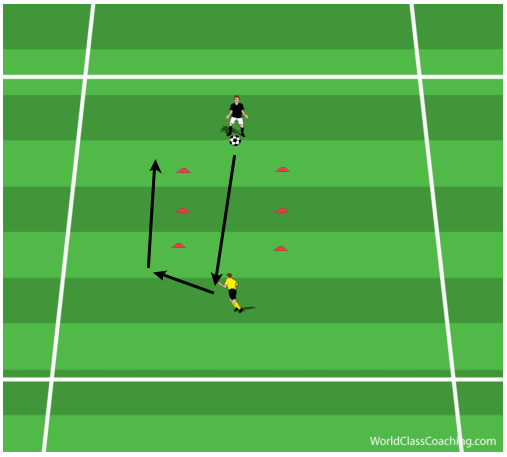 When we teach goalkeepers to deal with back-passes, it is useful to begin at the technical stage, emphasizing quality touches, changing the angle on the ball and accurate distribution. In the base exercise above, the coach passes balls for the goalkeeper to receive at the end of a lane. 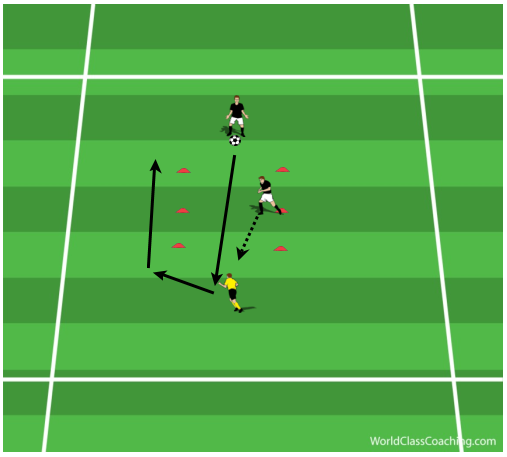 Exercise Training Receiving and Distribution for Accuracy in a Functional Setting 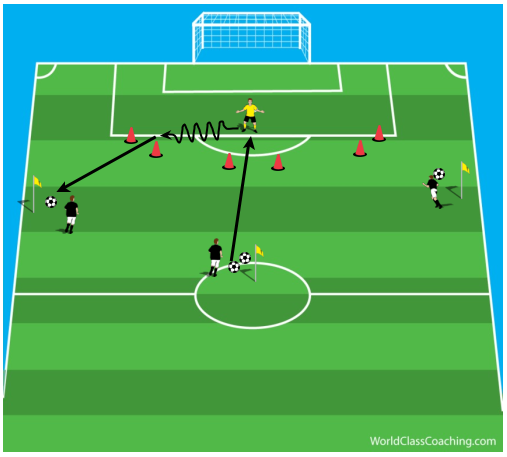 Use three servers (or one and three flags). The ball is served from any of the starting points and the goalkeeper must quickly receive and play through a different cone gate to a target or flag.

Dealing with Through-Balls and Back-passes in a Game Environment 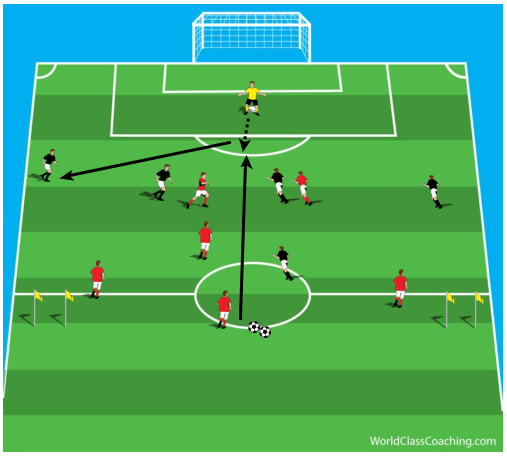 This is a 6 vs. 5 plus goalkeeper game. The goalkeeper’s team features a back four and a target striker. His team plays to the two counter flag goals. They must dribble through the goal to score. The opponents play a back line of three (with a center back who serves balls to restart play), a central midfielder and a pair of strikers. If this group win the ball, they play to goal. Note that all restarts are taken by the center back from the back edge of the circle and this player can serve over the top (through ball) for the goalkeeper and back line to defend or play to one of the backs, who are required to play to the goalkeeper before going forward. This setting creates a realistic environment for the coach to train the goalkeeper and the back line to cooperate in controlling the back third through dealing with through passes and playing back-passes.

There are many ways to expand the goalkeeper’s range and prowess in dealing with back-passes and through-balls and this series is a flexible, logical means of providing intensive training for the goalkeeper in key aspects of this critical component to team defending and possession.

Can You Clear Me Now?