Experienced, advanced goalkeepers sometimes fail to train on their edge if they are continually subjected to the same, rote technical training exercises. An engaging, challenging method of combating this complacency is to put the goalkeeper in an environment where they are forced to make multiple saves in tight, particularly where there is a recovery save involved. This article and the next in the series will offer a pair of scenarios where goalkeepers can be compelled to work on their edge and make multiple difficult, if confidence-building saves. 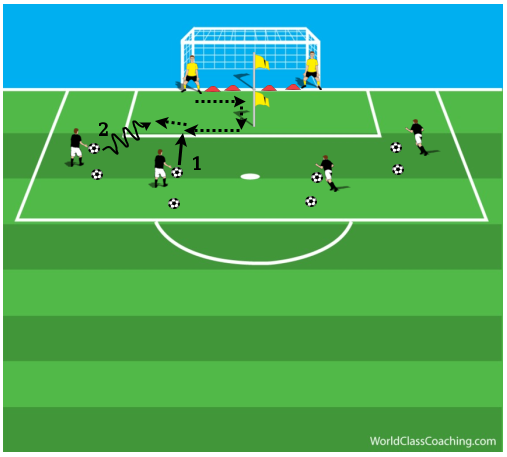 The base set up for this exercise requires a large ball supply and a goal divided in half, as well as a pair of shooters for each side of the goal. The goalkeeper starts with a hand on the post. He does footwork (usually two steps between cones, but jumping or zig-zagging are also effective here) through the cones or ladder to the center of the goal, where he touches a flag, steps forward to touch another flag and then makes a diving save back toward the post before recovering to stop a driven ball toward the same post by the other shooter. We often use this exercise in a club training setting, as it is efficient for 4 or more goalkeepers (using both sides of the goal). Note that goalkeepers need to rotate sides of the goal so that they dive both sides. 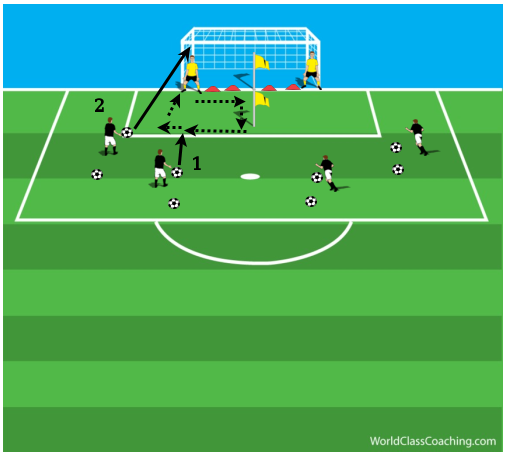 This is a tough, but fun goalkeeper training environment that offers much flexibility for intensive in-tight save situations. These exercises put technique under pressure, allowing the coach ample opportunity to build good habits in their goalkeepers. In the second article in this series, we will look at combining shots from more distance and constantly varying angles.

Footwork and Handling in the Warm-Up